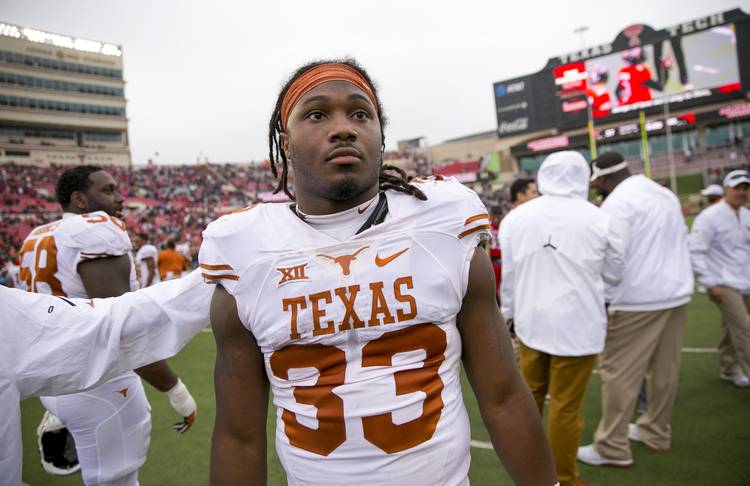 He missed out on becoming the Longhorns’ first Heisman Trophy finalist since Colt McCoy in 2009, yet Foreman won the Doak Walker Award as the nation’s top running back. He also very nearly led the nation in rushing; his 2,028 yards held up until bowl season, when San Diego State’s Donnell Pumphrey surpassed with a performance against Houston.

Foreman gave up his final season of eligibility to turn pro. Like so many other tailbacks, Foreman’s reasoning was he only had a certain amount of carries in his solidly-built, 249-pound frame. So he left his twin brother, Armanti, in Austin for a solo pro venture to try and become UT’s first running back selected in the draft since Chris Ogbonnaya in 2009.

“Honestly, I’m willing to play for anybody,” Foreman told reporters last week. “Anybody who’s willing to give me an opportunity, I’d be so grateful and blessed for the opportunity.”

Foreman will be running, jumping and lifting weights in front of dozens of NFL coaches and scouts at the league’s annual scouting combine at Lucas Oil Field in Indianapolis. He’s been prepping for the combine in Pensacola, Fla, and Houston. He’s dropped 10 pounds while doing additional work on his receiving skills to make him a more versatile back in the pros.

Currently, Foreman is viewed as a potential second-day pick. The draft’s biggest names, like Foreman, all gave up their final seasons of eligibility knowing that a pro tailback has a finite number of carries in his career.

Running back isn’t a coveted position with NFL teams. Coaches love power running offenses, but they prefer to platoon tailbacks. It’s always about carries. A year ago, Dallas set off the analysts when the Cowboys went against conventional thinking and picked Ohio State’s Ezekiel Elliott at No. 4 overall. Alabama’s Derrick Henry was the lone back in round two. There were only seven backs drafted in rounds one through four. Yet there were 14 taken in rounds five through seven.

Maybe Elliott’s rookie season — he gained 1,631 yards — has made it more palatable to use a first-round pick on a tailback. This year there are four tailbacks being mentioned as possible first-rounders, although all projections are fluid for the next few weeks. Foreman, though, isn’t drawing first-round attention.

LSU’s Leonard Fournette, who has the perfect blend of power and speed, is the consensus top back.

Florida State’s Dalvin Cook is the consensus No. 2.

ESPN draft analyst Mel Kiper said: “At what point should a team forget about what’s conventional and just take the best football player, period? That’s a question that could come into play with Cook, whom some teams will have graded as nearly on par with Leonard Fournette.”

From there, it’s a matter of offensive preference for the next back off the board. Stanford’s Christian McCaffrey, the Heisman runner-up in 2015, no doubt will dazzle scouts with his speed. He also will impress with his versatlity, given that he broke the NCAA’s single-season record for all-purpose yards in 2015.

Tennessee’s Alvin Kamara, who played only two seasons with the Volunteers, also is escalating up some draft boards. He started only eight games in two years, but rushed 210 times for 1,294 yards and caught 74 passes for 683.

But Bettis was drafted in the tailback heyday. He was the 10th overall selection in 1993.