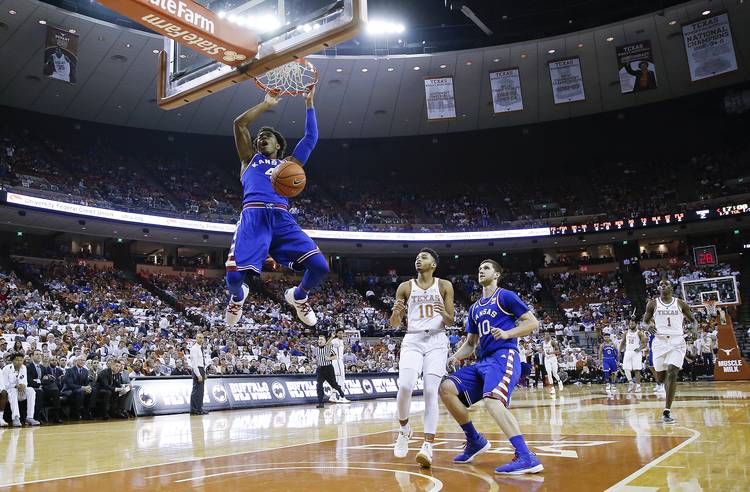 Devonte' Graham #4 of the Kansas Jayhawks slam dunks against the Texas Longhorns at the Frank Erwin Center on February 25, 2017 in Austin, Texas. (Photo by Chris Covatta/Getty Images)

Never heard of those Big 12 role players? All of them posted season-high numbers against Texas.

Kansas junior Dwight Coleby can round out the starting lineup after tying his career high with 12 points in a relatively business-like 77-67 victory over Texas on Saturday.

“I’m fired up for every game, no matter who I’m playing,” said Coleby, who came in averaging 4.8 points this season.

Oh, Coleby had plenty of help from Kansas’ stars. Frank Mason III, perhaps the legitimate Big 12 player of the year, poured in 16 points and Josh Jackson added 18 more. But they were happy for Coleby, who has overcome torn knee ligaments to be a contributor.

“He was ready when his number was called,” Kansas coach Bill Self said. “Hopefully we’re going to see that player moving forward.”

On a day when the UT swimming and track teams captured Big 12 championships, No. 3 Kansas (26-3, 14-2 Big 12) clinched the men’s basketball title outright. The Jayhawks grabbed a share of their 13th consecutive league crown earlier in the week with a win over TCU.

“I don’t want it to sound cocky, but no, I don’t think we had that doubt in our mind that we were going to be that team to break the streak,” guard Devonte’ Graham said.

For Texas, Jarrett Allen (20 points, 11 rebounds) and Andrew Jones (18 points) showed up ready. But Kerwin Roach Jr.’s six turnovers marred his day as the Horns had 15 turnovers overall and missed 13 of 16 shots from 3-point range.

It’s the first time Kansas has beaten Texas in football and swept the men’s basketball series in the same academic year. TCU also accomplished that rare trifecta earlier this month. The Horned Frogs hadn’t pulled that off since 1958-59.

“They’re efficient. They make plays,” Jones said. “They’re not unbeatable. They’re a beatable team. If we had done things better on our end, made smarter plays, we could have hang around with ’em.”

This is usually the biggest home game of the season, and the crowd of 14,111 turned out in force. A healthy number of fans wore blue, however, and filled up the seats in sections 30 and 31. And when Devonte’ Graham threw down a massive alley-oop dunk in the first half, the Jayhawk faithful gave full-throated support.

“We will work day and night to make sure we bring Texas football back to its rightful place,” Herman said to thunderous applause. Herman also gave TV commentator Bill Walton a tie-dyed “Keep Austin Weird” shirt. On national TV, Walton stripped off his shirt and put on his gift.

UT officials even brought in the famed Red Panda, a well-known NBA halftime act in which Krystal Liu balances herself on a unicycle and swings bowls onto her head.

The Horns started well, as they normally do. Allen’s two-handed dunk gave Texas a 20-19 lead. Then, the Jayhawks got rolling. Mason scored on a run-out, and Graham threw down his acrobatic dunk. Next thing anybody knew, Kansas was on a 12-0 run and had the lead.

Allen and Jones led the second-half charge and got the Horns back within five with 10:39 remaining. But Kansas simply motored to the finish line, prompting a “Let’s go Jayhawks” chant with more than two minutes left.

“That was our main focus. Don’t come out flat,” Graham said. “We’ve got to share the Big 12 title. We wanted to come in here and win it outright. That’s what coach preached. come in focused with energy and get the job done.”

Seventeen strikeouts force Texas to spell a loss with a K