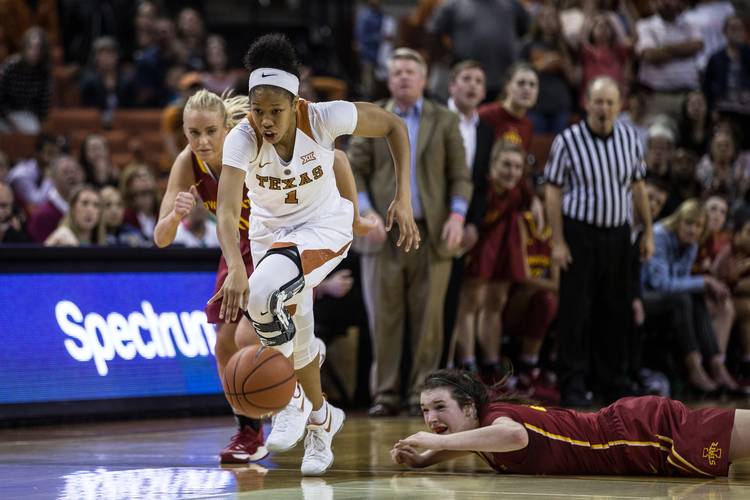 UT's Alecia Sutton breaks away from Iowa State players during a game at the Erwin Center on Fri. Feb 24, 2017. (Tamir Kalifa/ AMERICAN-STATESMAN)

To paraphrase an old saying, you only get one chance to make a final impression.

For the Texas women’s basketball team, that opportunity will be Monday night at Kansas State, the last regular-season game for both teams. While the Longhorns can boast about a 19-game winning streak that was snapped just nine days ago, their current three-game skid has players and coaches searching for answers.

March Madness is around the corner and the Longhorns are still picking up the pieces from lost opportunities.

A new month, though, could change their fortune. UT’s chance to play host to first- and second-round NCAA Tournament games remains strong. At 21-7, 14-3 in the Big 12, Texas still controls its destiny.

“We’ve got some work to do,” head coach Karen Aston said after Iowa State upset the sixth-ranked Horns 70-66 Friday night. “We need to turn this thing around and we’ll probably need to win in the Big 12 tournament and get a couple games there. It’s not a giant thing. It’s just a lot of little things that are adding up right now.”

It’s not a case of Texas falling apart. The Longhorns have led in the fourth quarter in all three of their last three losses. Texas also had a chance to win each game in the closing seconds.

“We have learned a lot from these games,” said senior Kelsey Lang, who played her final regular-season home game on Friday.” I think we have gotten comfortable with some of the things that we did really well during the season. … If we learn from this, we can move on and grow from it.”

Aston wondered whether fatigue has caught up with two of her freshmen, Joyner Holmes and Alecia Sutton. They had a rough night against the Cyclones, shooting a combined 9 for 23 from the field. Sutton was 2 for 8 behind the three-point arc, but declined to take a couple of wide-open shots in the closing moments.

“(Sutton) will take those shots the next time and she’ll make a percentage of them that will help us,” Aston said.

Despite the loss, Texas has made a good impression nationwide. The Longhorns are ranked 10th in the nation in Ratings Percentage Index (RPI) and their strength of schedule is ranked fifth.

“We need to worry about ourselves right now and get back to doing the things we did really well in the stretch we won so many games,” Aston said.

NOTES: Single-session tickets for the Big 12 women’s tournament are $25, $20 and $10 All spectators beginning at age two must have a ticket to enter the arena. One session will be played on Friday night with two sessions on Saturday and one session each on Sunday and Monday. Tickets are available through Big12Sports.com/BuyTickets. They can also be purchased at the Chesapeake Energy Arena box office Monday though Friday from 10 a.m. to  5 p.m. and on Saturday from 10 a.m. to 2 p.m., as well as during the championship.