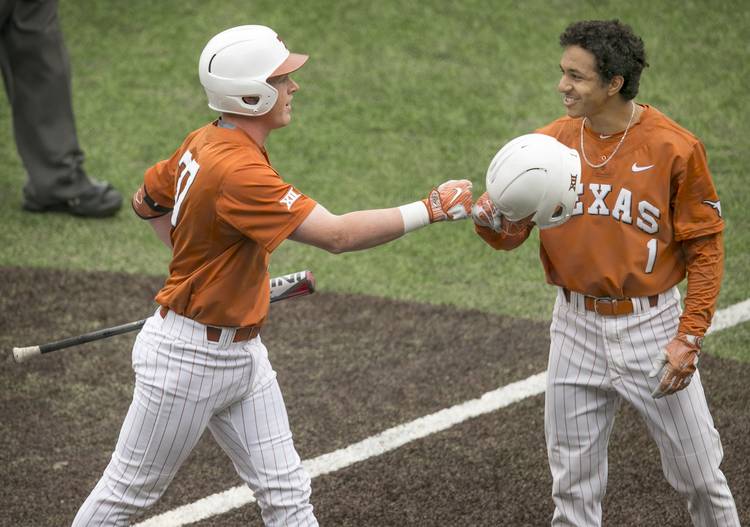 UT's David Hamilton, rigth, congratulates Ryan Reynolds after both of them scored in the first inning against UConn at UFCU Disch-Falk Field on Sunday February 26, 2017. JAY JANNER / AMERICAN-STATESMAN

Instead of an Academy Award, Ryan Reynolds earned a home run on Sunday.

Reynolds — Texas’ freshman third baseman, not the Hollywood actor — hit the first collegiate home run in a 9-3 win over UConn.

Texas improved to 5-3 with the victory, which became somewhat of a showcase for the Class of 2020. In addition to Reynolds, a few defensive plays by freshman shortstop David Hamilton gave UFCU Disch-Falk Field’s announced crowd of 4,292 a favorable forecast of the program’s future.

“I knew this freshman class was really, really strong,” Reynolds said. “I knew we were going to contribute a lot.”

One day after striking out 17 times in a 2-1 loss to UConn, Texas jumped out to a 3-0 lead. With one out in the first inning, Reynolds turned an offering from Doug Domnarski into a two-run homer to left field. Bret Boswell later singled in a run, and Texas never trailed.

The only switch-hitter on Texas’ roster, Reynolds scored three times, drew a walk and was hit by two pitches on Sunday. Reynolds, who is the son of ex-Longhorn Shane Reynolds, was hitting .100 in his 20 at-bats before his milestone homer.

“I didn’t know if it was going to stay fair because it was hooking,” Reynolds said. “I was just running, and I didn’t even know it went out. It was kind of a shock to me. It was pretty cool.”

Reynolds’ homer also plated Hamilton, who was issued a walk from the second slot in the line-up. Hamilton’s batting average dipped to .080 after a 0 for 4 performance, but the San Marcos product was dazzling on defense.

In the first inning, Hamilton was the middle man on centerfielder Zane Gurwitz’s relay throw to cut a runner off at home plate. Hamilton also baited two Huskies into base-running mistakes during an unorthodox double play in the second frame. After committing his first two errors of the season in Saturday’s setback, Hamilton was credited with four defensive assists.

“He’s got more range than anybody on our team. He’s got a great glove,” Texas head coach David Pierce said. “He has this little instinct about him that really allows him to be a kid that’s got the ability to develop into a great shortstop. He still has a lot to learn, but he has the fast twitch and the ability to fast-pace that a little bit.”

Both Reynolds and Hamilton were making their seventh starts on the left side of the infield. Reynolds has yet to make an error, and he has recorded 10 assists. Hamilton has thrown out 28 opponents.

“Whether they’re freshmen or seniors, they’re making plays,” pitcher Kyle Johnston said earlier in the week. “It’s good to see that they’re having fun out there, they’re all relaxed. They really do show leadership out there. I think throughout the next two, three years, whatever it is, they’re going to be solid ballplayers.”

Rounding the bases: Jake McKenkie picked up the win after throwing 4 2/3 innings of one-hit relief. Freshman Blair Henley, who was pulled in the third inning after allowing six hits and two walks, became the first Longhorn starter to not complete five innings. … Senior Kacy Clemens, who leads the Longhorns with his three home runs, picked up the first steal of his career. … Pierce said junior Connor Mayes (0-1; 5.40 ERA) will start in Tuesday’s home game against Lamar. … A winner on Friday but a loser on Saturday, Texas claimed a conquest in its three-game set with UConn (4-3). It was first series won by Pierce with the Longhorns.