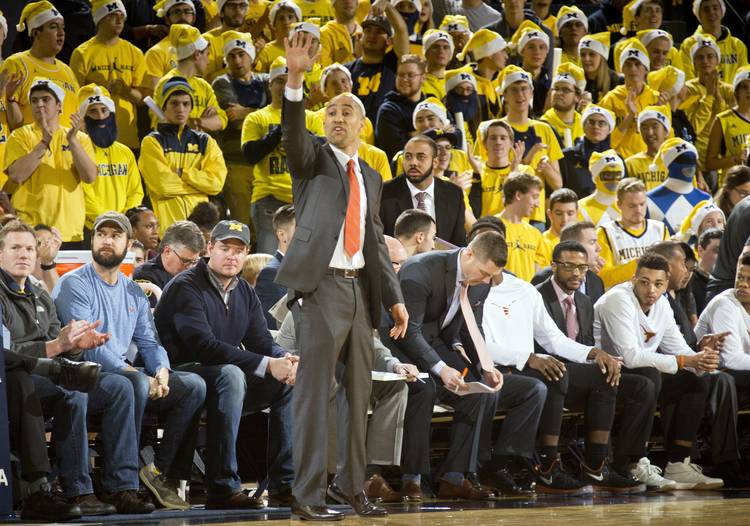 As if Texas’ overall record wasn’t bad enough, here’s another stomach-churner: This could be the first season in 111 years of UT basketball that the Longhorns go winless on the road.

The 1908-09 team finished 6-3, but played all of its games in Austin, so coach W.E. Metzenthin never had to worry about a long, miserable train ride home. Marshall Hughes presided over a 61-59 win over Baylor at the Southwest Conference tournament in Houston on Dec. 27, 1957. But that UT team still finished the year 1-11 in road and neutral site games. Bob Weltlich’s woebegone Longhorns finished the 1982-83 season on a 13-game losing streak. But Texas at least bumped off Charlotte at the Cable Car Classic in Santa Clara, Calif., on Dec. 30 and finished the season 1-12 away from home.

If Texas can’t win in the Hub City, then its last chance at preventing an 0-for-the road season will come at the Big 12 tournament in Kansas City.

Asked about his team’s road record, Smart didn’t shy away from the question. “It’s really disappointing,” he said.

The Longhorns’ first road trip resulted in two losses at the Legends Classic in Brooklyn, N.Y. Texas got blown out by Northwestern and Colorado. Smart looked back at the 53-50 loss at Michigan on Dec. 6 — Texas’ first true road game of this season — as one he’d like to have back. Eric Davis Jr.’s late shot, coming at the end of a helter-skelter possession, was blocked in the closing seconds. Fans in Ann Arbor ate it up.

“With a young team, with the challenges that we knew we’d have at different times in the season, that sure was a game that really would have meant quite a lot,” Smart said. “If we win it, now it’s one you have in your pocket and you say, ‘Hey guys, we went up there and played really well defensively against a good team on the road.’”

The 77-74 loss to Arkansas at the Lone Star Shootout in Houston was another chance for some road success. The 59-57 loss at Georgia as part of the Big 12/SEC Challenge was another potential victory gone awry.

The Horns are 0-8 so far on the road in Big 12 play. In every game, Smart’s team stuck to its familiar script. They routinely play well for long stretches but go scoreless at the wrong time or can’t answer a big run. That’s how close games turned into double-digit losses at Baylor, Kansas and West Virginia.

After a 13-point loss at Oklahoma State, freshman Jarrett Allen said, “We just can’t finish out games. In this game, we were up eight. We’ve got to keep being the aggressors. It’s us. We’ve got to figure out how to end games.”

Three days later, after a four-point loss at Oklahoma, Kerwin Roach Jr. said, “We just lose our aggressiveness. We came out (of halftime) aggressive. We extended the lead to seven. We were doing everything right.”

The Horns held a players-only meeting prior to the West Virginia game at the team hotel in Morgantown. That didn’t really work, either. Texas lost by 15 and had a long, miserable flight home.

“There’s been a lot of games that have been tight,” Smart said. “But we just haven’t done what we need to do to finish those games. And that’s happened some at home, too, but particularly on the road.”

Expect no quarter from the Red Raiders. First-year coach Chris Beard was deflated beyond belief after his team lost a four-point game at the Erwin Center on Feb. 1. Tech is shooting for its second consecutive win over Texas at United Supermarkets Arena.