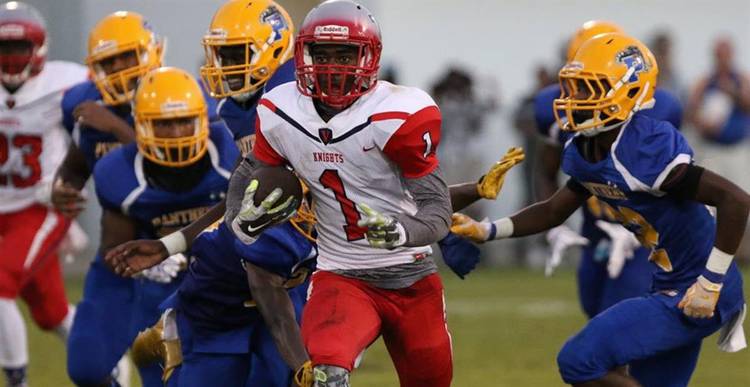 Florida native Justin Watkins, a 4-star athlete, became the first player from the 2018 class to commit to Texas. (Greg Oyster/247Sports)

The Longhorns hosted more than 50 elite 2018 and 2019 prospects over three days last weekend. A junior day allows a coaching staff the opportunity to put forth a sales pitch to the next crop of potential signees.

From all accounts, Tom Herman’s first crack at junior days as Texas’ head coach was an overwhelming success. Here are quotes from the top offensive targets who made the trip to Austin over the weekend.

The crowning achievement of the weekend was flipping the nation’s No. 1-ranked athlete, four-star wide receiver prospect Justin Watkins, from Florida State.

“I like the way the coaches talk to me about life, and not just football,” Watkins said. “They’re going to get the ball in my hands and let me make plays. I just feel like this is the right place for me. I’ll stand out here because I’m from Florida. I want to be a different player and Texas will allow me to be that.”

Watkins, from Ocala, Fla., had been committed to the Seminoles since last summer but hinted leading into Texas’ junior day that the Longhorns were his new leaders. On Saturday, he pulled the trigger.

“It was an easy decision once I saw that this place was what they were telling me,” he said. “I was already leaning (before the visit). “It feels good being the first commitment, and I think more will follow.”

As a player who’s already flipped once, the obvious question is whether Watkin’s done with the recruiting process now that he’s a Texas pledge.

“I’m done with recruiting,” he said. “I mean, I might still take some visits, but I’m committed to Texas.”

Watkins said he’ll be used at UT as a slot receiver and a returner. Another receiver received extra attention from the Texas staff on Saturday, too. Brennan Eagles is quickly becoming the highest-ranked wide receiver prospect in the state and the Longhorns put on a full-court press for the 6-4 recruit’s eventual signature.

“Herman has everything going on and he’s really going to change this place,” Eagles said. “… I’ve been getting a lot of recruiting attention lately and I’m trying not to really worry about it and keep it in perspective.”

Texas is in good position for Eagles, but don’t expect a decision anytime soon; Eagles said he plans to wait until signing day and announce his choice on ESPN.

Houston Lamar was well-represented in Austin over the weekend with the state’s No. 1 player, cornerback Anthony Cook, receiving red carpet treatment. He’s one of three or four Lamar players that Texas is after in the 2018 cycle. Another target is wide receiver Al’Vonte Woodard, a four-star prospect who has made his affection for Texas, and specifically the UT staff, known.

“I’ve been talking to the coaches for a long time and I finally got to visit,” said Woodard, who plans to come back to Austin during spring break. “It felt like home and it was exactly what the coaches have been telling me about. It could be my home.”

Texas would make a splash if it can land Woodard, Cook and Lamar cornerback D’Shawn Jamison. It sounds like the trio have discussed attending the same college.

“We’re real tight,” Woodard said. “We talk about recruiting every day, and which schools we could possibly end up going to together. It’s very tight.”

Another athlete to keep an eye on in the coming months is Rockdale’s Jaquayln Crawford, who visited Austin on Sunday. He can play in the secondary or at wide receiver. He spent a ton of time with assistant coach and former Texas great Michael Huff on Sunday.

“The visit was real nice,” Crawford said. “It was my first time on campus. I got to meet all of the coaching staff and talk to coach Herman and his wife. It was a pretty big deal for me (to get offered) because I was talking to coach Herman and coach Meekins while they were at Houston. So when they came over to Texas, I was like ‘Oh … I might get Texas interest now,’ so it was pretty cool because I never talked to Charlie Strong or that staff.”

Texas is in great shape for Crawford. The 5-10, 170-pound playmaker is the type of athlete a coach gets on campus and then figures out his best position later.

“Texas is very high,” Crawford said. “TCU is up there. Notre Dame, Oklahoma and Florida are also in there.”

Wide receiver wasn’t the only position with lots of representatives at junior day. The offensive line had multiple players with offers walking around campus. One of those was Allen’s Trey Stratford, who was impressed by UT’s facilities and planned upgrades; he said Texas wants the locker room improvements completed by June, and that Herman estimated the project to be “about a $10 million upgrade.”

“I think it is a great plan,” he said. “Like I said, the facilities were already great for me, but I’m glad he’s spending the time and money to make it as great as it can be. It shows how much he cares about the program.”

Stratford said the staff thinks he’s a versatile lineman with the chance to play multiple positions in college. He’s currently a tackle, but his 6-4 frame might force a move to guard, much like 2017 signee Derek Kerstetter.

“I don’t have a list or anything, but Texas is definitely up there,” Stratford said. “I love Texas. I love everything it stands for. I grew up playing for the Texas Longhorns in pee-wee football, so it started from there. The love started in the Mack Brown era and has been present my whole life. Coach Herman being here only makes it better.”

Another interior lineman Texas is hotly chasing is Fort Bend Marshall’s Barton Clement. He’s high on Texas A&M, but the Longhorns made up ground during junior day. He said Texas is tied at No. 1 with A&M.

“I like the city. It is amazing and there are a lot of things to do,” Clement said. “Herman felt like an excitable guy and is very energetic. His message is that you always need to go 1-0 and everything that you do counts.”

Tight end is another need position for the Longhorns, and the state’s top tight end prospect — Spring Dekaney’s Malcolm Epps — also was on campus.

“It was great. It felt like I was back home,” said Epps, a former Alabama commitment. “They use the tight ends almost all the time, and that’s similar to how we use the position at my high school.”