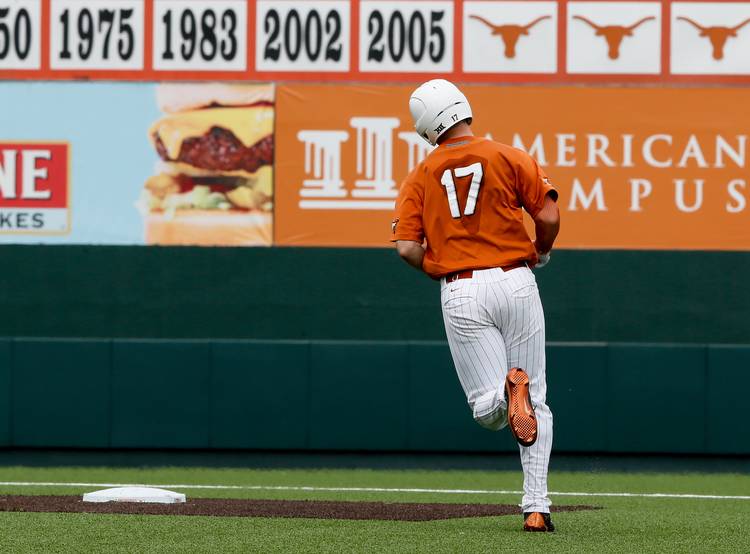 Bret Boswell (17) rounds the bases on his solo home run in the final game in a series against the Rice University Owls at the University of Texas' UFCU Disch-Falk Field in Austin, Texas on February 19, 2017 (Andy Nietupski for AMERICAN STATESMAN)

For the Texas Longhorns, it’s time to head west.

Texas tuned up a road trip to California with a 9-5 win over Lamar on Tuesday night. Texas improved to 6-3 with the victory, but only one of its nine games this year — a 7-2 victory at Sam Houston State on Feb. 22 — has been played away from UFCU Disch-Falk Field.

That will change later this week when Texas heads to Stanford for a four-game series that opens on Thursday. Stanford and Texas are respectively ranked 19th and 21st in D1Baseball’s national poll.

“Offensively, you want to build off of this,” said Texas coach David Pierce, who noted the Longhorns must now adjust to playing on a grass field. “We know it’s going to be tight games out there. We just want to continue to have quality at-bats and be very consistent defensively and on the mound.”

Texas fell into an early hole on Tuesday as Lamar freshman Cole Coker hit a three-run shot in the second inning. Texas, though, scored during three of its next four at-bats. The Longhorns exited the fifth frame with a 7-3 advantage.

.@bboswell17 due up third this inning. He did this his second AB 👀: pic.twitter.com/mYRrbmqdM9

Texas’ biggest swing belonged to junior infielder Bret Boswell, who hit a two-run home run in the third inning. Boswell’s second homer of the season was never in question as it ricocheted off a light pole beyond the right field fence.

“That felt great,” Boswell said. “It’s one of those that you don’t even feel it off the bat. I just watched it go, and it was just a great feeling.”

Two days after it set a season-high for runs in a 9-3 win over UConn, Texas matched that production. The Longhorns collected nine hits against 10 Lamar pitchers, only one of which lasted longer than an inning. The pitching changes provided Texas’ offense with different looks throughout the evening.

Boswell, for example, hit his home run off of Ryan Erickson, who is listed as an outfielder on Lamar’s roster. Boswell drew walks from southpaw Matt White and the right-handed Chad Fleischman, and sophomore right-hander Josh Crain hit him with a pitch. He ended up scoring four runs.

Boswell said it was tough to adjust to the revolving door of Cardinal pitchers, but in-game preparation helped his cause. First baseman Kacy Clemens hit ahead of Boswell on Tuesday, and Boswell scouted his opponents from the on-deck circle since Clemens bats left-handed like he does.

“They weren’t too overpowering, so that made a little difference,” Boswell said. “With Kacy if front of me having long at-bats and having great at-bats, it really helped me see how they were going to pitch to another lefty.”

Rounding the bases: Relief pitcher Nick Kennedy was credited with the win, and the sophomore improved to 2-1 in his career. Kennedy registered four outs while allowing one hit after he relieved Texas starter Connor Mayes in the fourth inning… After striking out 36 times in its three-game series with UConn, the Longhorns struck out four times on Tuesday… Texas improved to 32-7 in its all-time series with Lamar. The Cardinals earned a 4-2 win in last year’s meeting.

0-no: Heading to Lubbock, Texas is still winless away from home this season