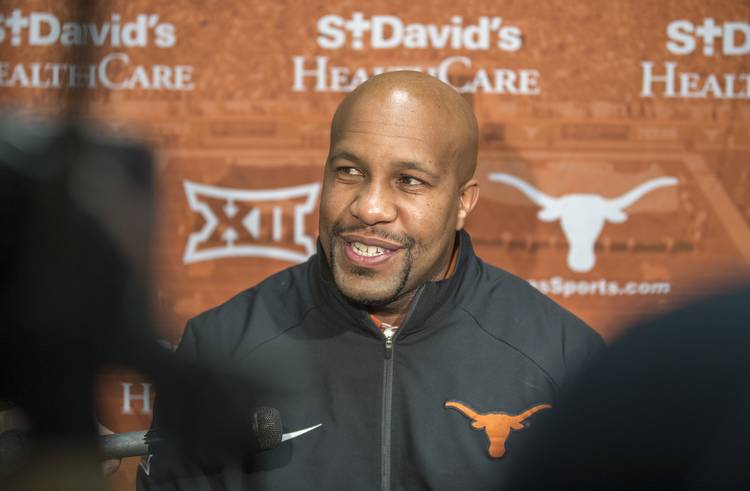 Like many others, Jason Washington dressed to impress when he got his first job.

Hired in 2004 to coach Texas State cornerbacks — he was himself a Bobcats defensive back as a player — Washington wore a suit on his first day of work. He wore that suit again the next day, and the day after that, and for the next few days until Bobcats head coach David Bailiff threatened to fire him if he showed up again in a tie. So Washington bought a pair of boots.

Thirteen years later, Washington still has those boots. He’s added two more pairs for his closet. Now the cornerbacks coach and recruiting coordinator at Texas, he fashions himself as a jeans and boots guy. Even within the confines of UT’s Moncrief-Neuhaus Athletic Center, the laid-back 37-year-old often prefers boots over tennis shoes.

“When the corner group came in and saw me wearing boots and jeans, they were like ‘Wait a minute, you coach corners,'” Washington recalled. He then joked: “This boot may be somewhere you may not like it if you’re not doing things right.”

Come September, Washington’s footwear will be merely a, well, footnote for Longhorns fans. His work with Texas’ talented but maligned cornerbacks — Craig Naivar will coach the safeties — will be of more interest.

Over the past five years, only three Longhorns defensive backs have landed spots on the All-Big 12 first- or second-team units; Quandre Diggs was a second-team pick in 2014 and Carrington Byndom was a second-teamer in 2013. Kenny Vaccaro was a first-team selection in 2012, but he was a safety.

It’s not that Texas is lacking in cornerback talent. Of the seven scholarship cornerbacks coming back, six were four-star recruits coming out of high school. Sophomore Kris Boyd and junior Antwuan Davis were U.S. Army All-Americans. Eric Cuffee earned Under Armour All-America accolades. At Texas, it’s Washington’s job to turn those stars into better results.

“I think they’re talented guys, a talented group,” Washington said. “Now it’s just bringing my, hopefully my expertise and some of those other things to allow them an opportunity to compete. They’re hungry, they’re excited about it.”

Washington’s arrival could provide some coaching consistency for the Texas corners. Davis, for example, has reported to five different position coaches — Washington, Vance Bedford, Clay Jennings, Chris Vaughn and Duane Akina — since he signed with the Longhorns in 2013.

A San Antonio native, Washington was an undersized defensive back who lettered at Texas State from 1998-2001. He also played baseball there; his 110 career runs scored are tied for 12th in school history.

Washington has spent the past 13 years instructing defensive backs at Texas State (twice, from 2004-06 and again from 2011-14), Rice (2007-10) and Houston (2015-16). In 2015, Houston was one of only nine teams in the country with 20 interceptions, and Texas State ranked 38th in interceptions in 2014. Texas State’s Craig Mager, Rice’s Phillip Gaines and Houston’s William Jackson are NFL corners who played for Washington.

He lists coaches like Bailiff — “He’s someone that’s on speed dial, next to, of course, my wife and my parents” — and Buffalo Bills defensive coordinator Leslie Frazier as his mentors.  He describes his coaching style as detail-oriented and energetic.

Josh Thompson, a 2017 signee from Nacogdoches, was impressed with Washington’s ability to communicate, but said he also expects the coach to be hard on his players.

“He’s always kept it straightforward with me,” Thompson said. “I can’t wait for him to coach me.”

Editor’s note: This is the second of an occasional series profiling Texas’ new assistant football coaches.