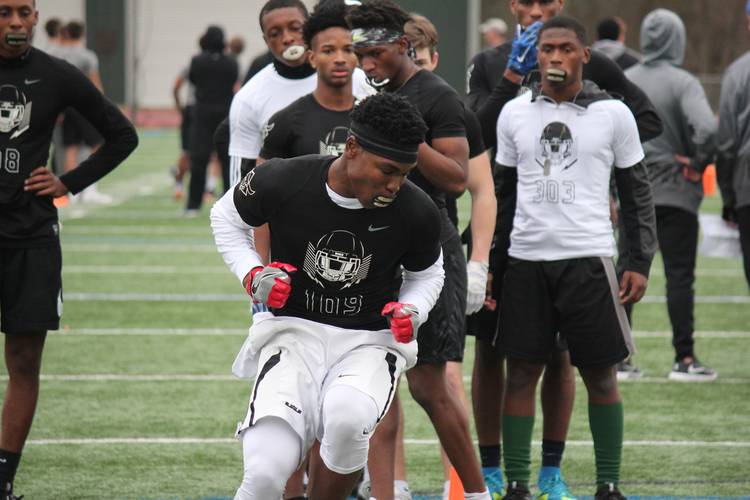 Texas’ junior day was a success. The Longhorns picked up one commitment over the weekend while hosting more than 50 of the best players in the state and a few from across the nation. As noted earlier in the week, the offensive prospects who were on campus gave rave reviews of Tom Herman’s new regime. As did top defensive back prospects Anthony Cook and BJ Foster, as well as the state’s No. 3-rated prospect, defensive lineman Max Wright.

Those three weren’t the only major defensive targets who attended UT’s junior day. Tulsa product and three-star safety Patrick Fields released his top three schools of Texas, Oklahoma and TCU following his visit to Austin. Fields says he’ll announce this weekend at The Opening in Dallas. Oklahoma is the heavy favorite to land him, but Texas made a strong impression.

“The city and the campus are amazing,” Fields said. “It’s hard not to like Austin and the new staff. Those guys are energetic and you can see that (Texas) is heading in the right direction. It’s one of my top schools, for sure.”

Another safety prospect who recently included Texas in his top three was South Grand Prairie’s four-star standout Atanza Vongor. He also was at junior day and couldn’t hide his enthusiasm and affection for UT.

“… I had a chance to get a feel for the university. I was here back when (Charlie) Strong was here, but I didn’t get the full experience, but it was great to see everything today,” Vongor said. “The coaches are different and it sounds like a lot of good things are happening here after we were able to talk to some of the current players.”

Some elite prospects like to draw out the recruiting process. Not Vongor. He wants it over with as soon as he feels comfortable enough with a school to commit.

“Texas will play a factor for where I go,” he said. “I want to decide in the next month.”

Herman’s success at Houston, and even as the offensive coordinator at Ohio State, was preached to each recruit during their visit. The message appears to have hit home.

“The success coach Herman’s had everywhere he goes makes me know that Texas is on its way back,” Vongor said.

The safety position could fill up fast if the Longhorns can lock down either Vongor or Fields. Most believe five-star prospect BJ Foster eventually will sign with the Longhorns, too. The same is true for Arp’s DeMarvion Overshown.

“It was awesome. It was a great campus and nice people,” Overshown said. “They didn’t talk to me much about where I would play, but I think I’d play linebacker most likely. All the stuff they’re planning to add and how they run the program is amazing. They said it will be $11 million of renovations and be the best.”

It is no secret that Texas leads for the Arp product. Texas was the second team to offer the four-star safety, who now holds 22 offers.

“There is a great future for this program, and I might be possibly joining that program,” he said. “They’re definitely high on my list, mainly because I grew up a Texas Longhorn fan and there are great coaches. I’ll be here for more unofficial visits to Texas and I will commit before my football season starts.”

One more safety to watch over the next few months is Houston Cypress Springs’ Leon O’Neal. Fresh off a dominant performance at The Opening in early February, O’Neal made a case to be considered the second best safety in the state behind Foster. Texas wasn’t high on his list heading into junior day, but he still made it to Austin and walked away impressed.

“Texas is a family. A lot of Texas schools feel like home because you are home, but Texas telling us that we can start something new here is something special,” O’Neal said. “A real man can take that on, and it is something I need to look at. He’s won a lot of games against major teams at a place like Houston. He can do all that at Houston and now he’s at Texas? Man, that’s something I’ve really got to look at.”

Safety wasn’t the lone defensive position with top targets on campus. Texas needs defensive linemen. The top priority at defensive tackle is Spring Westfield’s Keondre Coburn. The four-star tackle is in wait-and-see mode with the Longhorns.

“I’ve been knowing this staff since I was a freshman because coach (Corby) Meekins was my head coach at Westfield, and all their time at Houston,” Coburn said. “I know what these guys are about and they haven’t changed. It’s a family. They need to prove they can change this school like they changed Houston. I want to win.”

Houston is home to most of the top-ranked 2018 prospects, with 12 of the top 15 members of the American-Statesman’s Fabulous 55 residing in or around that area. It isn’t lost on Coburn and this year’s crop of athletes.

“We’re a special group. We stay on a group chat together and stay in touch,” Coburn said. “We want to represent for Houston and show we have the best football in this state. It’s a bond that is real and we take it seriously. It wouldn’t surprise me if some of us ended up at the same school, but we’ll all find the best spot for ourselves because that is what is most important.”

Bobby “Tre” Brown also was on campus, and the new UT staff confirmed that his offer from the previous staff still held. Brown is a Fab 55 member with upside from the Dallas-Fort Worth area.

“There is no place like Texas,” Brown said. “It is like no other place I’ve visited in the past. I like how the coaches who are here have played here. They aren’t selling a program they didn’t play at. It means a little more when they’ve played here and won here. It’s just different.”

Now that he knows his offer stands, Brown can factor Texas into his college favorites.

“Texas is one of my top five,” he said. “I like the culture here. The staff at Houston won with nowhere near the talent they’ll have (at Texas). I think they’ll turn it around.”

If Texas misses on Coburn and Brown, Cedar Hill’s Shabazz Dotson might be the next big man to receive an offer. The 6-3, 271-pound three-star holds offers from Houston, Michigan, Kansas State, Texas Tech and Iowa State.

“It was a fun, exciting visit. It was a great visit,” Dotson said. “I talked to coach Giles and he says he will stay in contact. I’m pretty sure one day I’ll get an offer, and they’d be pretty high on my list.”

When asked why, Dotson’s answer was simple.

Had a great time today at Texas 🤘🏾#HookEm #revolution18 pic.twitter.com/GrhtgSSqx7

Wright is Texas’ top target at defensive end, but the Longhorns want to sign at least two in the 2018 class. Another target is Dallas Carter four-star end Jarell Cherry. With Texas expected to switch more toward a 3-4 look on defense, Cherry is targeted as an outside linebacker.

“It was amazing. I got to catch up with coach Giles and I’m looking forward to continue that relationship,” Cherry said. “They want me as an outside linebacker. I’ll be doing a lot of rushing the passer, but they also want me to drop back in coverage.”