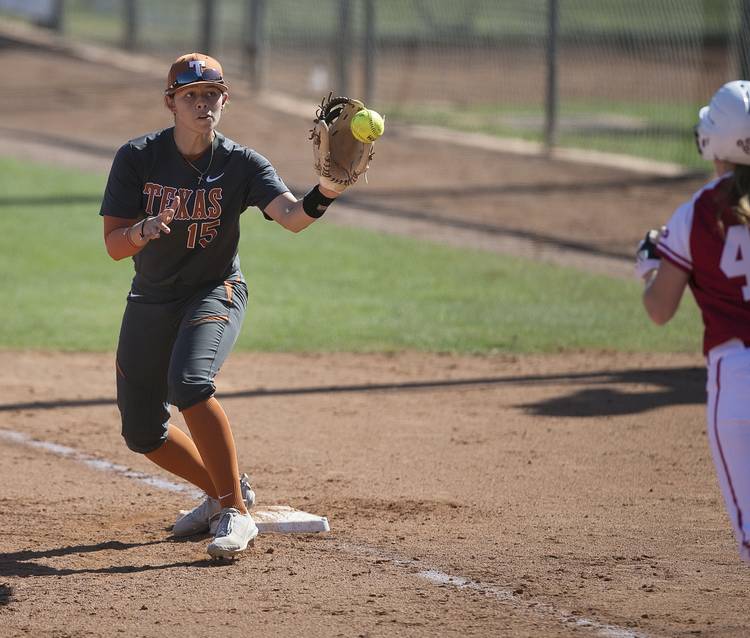 Texas first base player Jade Gortarez catched a ball for out an out against Indiana during the third inning on Saturday, February 17, 2017. DEBORAH CANNON / AMERICAN-STATESMAN

Since she’s still swinging a bat and showing off her glove, this spring has been like many others for Jade Gortarez.

Gortarez, a freshman second baseman on Texas’ softball team, is 16 games into her college career. That means she’s also 16 games into an introductory softball course — she played baseball, not softball, throughout high school in California.

She has started 13 of Texas’ 16 games; her .983 fielding percentage so far led senior pitcher Tiarra Davis to proclaim that “she is one of our best defensive players on the field.” The 5-6 freshman is hitting .310 and ranks third on the team with 10 RBIs. She also has struck out a team-high 12 times as she adjusts to softball pitching.

“Making the transition into college, the biggest thing is getting the hitting and timing, just because it’s different,” Gortarez said. “Defensively, I don’t struggle … I attribute my baseball background to most of my success.”

Gortarez’s parents tried to get her interested in softball a few times, but baseball is the sport she’s loved since she was three years old. She played varsity baseball all four years at Riverside Hillcrest in southern California even though Hillcrest had a softball program. She also started for the U.S. Women’s National Baseball Team. Gortarez said she even discussed playing college baseball for both Johns Hopkins University in Baltimore and nearby Occidental College in Los Angeles.

She was practicing baseball the summer before her junior year when she was approached by Pam Newton, whose club softball team needed a shortstop for an upcoming tournament. Since that would give her the chance to play in front of Division I softball coaches, Gortarez said yes.

One of those college coaches was Texas’ Connie Clark, whom Newton had tipped off about Gortarez. Clark and Newton both played at Cal State Fullerton.

“I heard about her and went and watched her, and our staff went and watched her,'” Clark said. “(We said), wow, absolutely, we need to take a chance on trying to shape her swing up a little bit. Outside of that, she plays defense as good as anybody in the country. Really special, just a tremendous find for us.”

She plays softball now, but Gortarez has found ways to stay true to her baseball roots. She’s kept the same superstitions. She wears a sleeve on her right arm. And she sports a baseball cap with a slight bend to the bill, which contrasts with the visors, headbands and ponytails worn by her teammates.

“I’ve always played with a baseball hat,” she said. “Baseball hat, I’m just comfortable. Not forgetting who I am as a player and where I came from and my background.”

Texas (11-6) travels to sixth-ranked Arizona for three games this weekend.

Track garners three awards: For the second straight year, Texas produced the Big 12’s men’s outstanding track and field performer of the year, one of three major conference awards for the Longhorns announced Thursday. Senoj-Jay Givans, who won his third Big 12 indoor 60-meters title, was the men’s performer of the year. Head coach Mario Sategna was named the men’s coach of the year and Rushelle Burton, who was the only freshman woman to win an indoor title last weekend (60-meter hurdles), was named women’s outstanding freshman of the year.