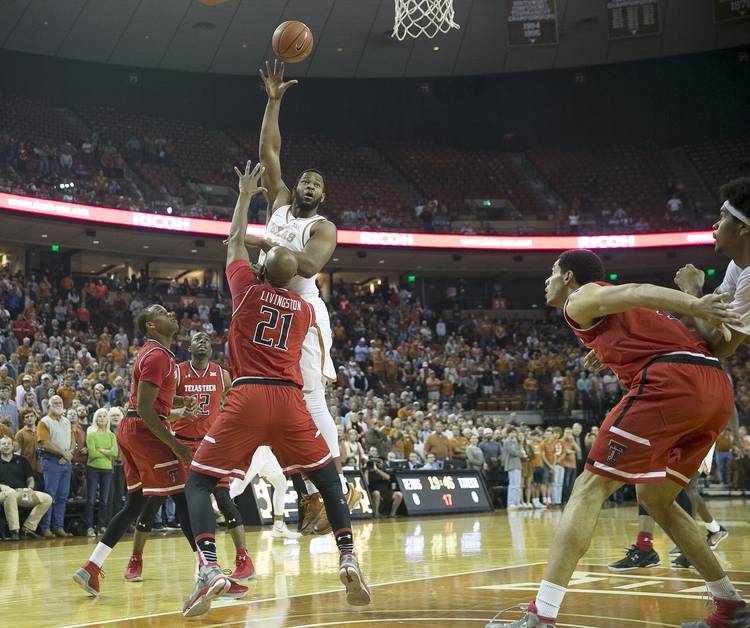 Texas senior Shaquille Cleare shoots over Texas Tech's Anthony Livingston during the first half of their game at the Erwin Center on Wednesday, February 1, 2017. DEBORAH CANNON / AMERICAN-STATESMAN

Shaq Cleare and Kendal Yancy both glanced up into the Erwin Center rafters during Thursday’s practice and stopped dead in their tracks.

“It dropped my heart a little bit when I saw my jersey hanging in the arena,” said Cleare, one of three Texas seniors. “This time is winding down. So coach told me just to enjoy it, embrace it and have fun. You’ve got nothing to lose.”

Cleare, Yancy and graduate transfer Mareik “Mo” Isom all will be honored, along with six student support staffers, during a pre-game ceremony on Saturday as part of the team’s senior day festivities. Then comes the 3 p.m. regular-season finale against No. 11 Baylor.

“I don’t want to get too emotional in the game,” Yancy said, “but I do want to beat Baylor.”

Cleare and Yancy will forever be linked as two players who experienced a wide array of emotions with the Horns. They both went through a tumultuous coaching change, celebrated thrilling game winners and suffered through a miserable 0-14 record away from home this season.

“One thing that I feel really good about is that they’re both on track to graduate,” coach Shaka Smart said of his two education majors. “Basketball-wise, they’ve contributed quite a bit.”

Originally from the Bahamas, Cleare first started his journey at Maryland but transferred to UT prior to the 2014-15 season. He sat out that year, watched and learned from centers Cam Ridley and Prince Ibeh.

As a junior, Cleare averaged just 3.6 points as the third-string center. But he made serious improvements in his cardiovascular strength last offseason and started running south toward downtown Austin from his UT dorm room.

He dropped about 15 pounds to start the season in the 280s and, after long work with assistant coach Darrin Horn, found a smooth touch around the basket.

This has been the best season of Cleare’s college career. The happy-go-lucky, 6-8 big man is averaging 8.2 points and 4.7 rebounds and has proven to be a voice of reason for a host of younger players in the locker room.

“It’s been an honor and blessing to be here at Texas over the past few years,” he added. “I’ve just embraced it all. I can’t really complain about anything.”

Cleare hasn’t ruled out playing professionally, most likely if it means going overseas. He’ll go wherever there’s money involved. He said if he ever amasses enough, “Shaq’s gonna be on some Caribbean island drinking out of someone’s coconut.”

Yancy signed with former UT coach Rick Barnes as the 85th-ranked prospect in the nation. The Richardson Berkner product quickly found his way into and out of Barnes’ doghouse as a freshman for defensive lapses. But he kept improving and became a solid role player behind veterans like Javan Felix, Demarcus Holland and Isaiah Taylor.

Yancy’s minutes have fluctuated depending on who was in foul trouble or the game’s situation. He’s averaged 4.4 points over his career, and will play in his 125th career game.

Asked about his advice to younger Longhorns, Yancy said, “Just being able to play hard. Just going out there showing that you care. Just leaving it all on the court. That’s the best way to show your respect not only for your team but for the game, too. Usually, good things come out of that.”

Yancy, like Cleare, dreams of playing professionally somewhere. Considering that Felix, Ridley and Connor Lammert are all playing overseas, anything is possible, Yancy figures.

Isom’s season was cut in half by a bacterial infection in his ankle. He missed November and December but has played most of the conference schedule. The Austin native who transferred from Arkansas-Little Rock had his best performance against Kansas State, when Isom scored eight points in 16 minutes.

The Dotted Line: Taking over Houston is one thing, but Texas has to win DFW too

Texas’ spring roster: What kind of offensive hand as Tom Herman been dealt?