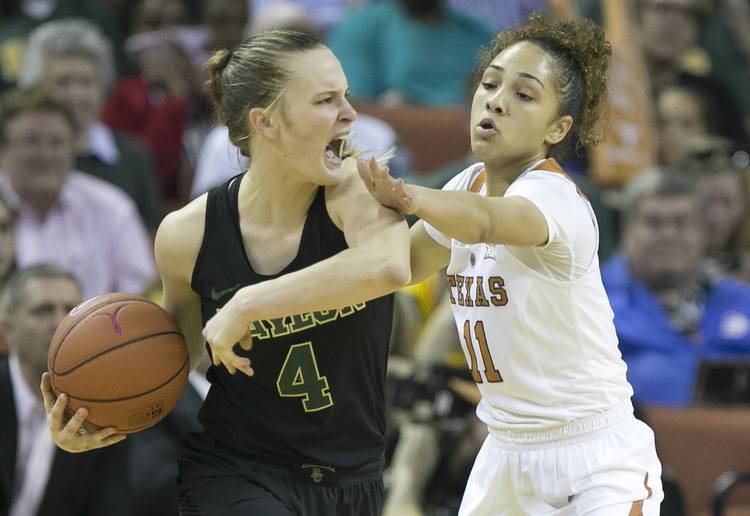 For the Texas women, It’s back to business for a basketball team that’s been awash with individual accolades this week.

The Big 12 tournament has convened in Oklahoma City, and Texas is unsure what it all means. Winning it would look good for the Longhorns’ portfolio, of course. But for all practical purposes, it serves as little more than a tune-up for the NCAA Tournament that begins March 17 at a basketball court near you.

For openers, Texas will play at 6 p.m. Saturday at Chesapeake Energy Arena against the winner of Friday night’s Kansas-Oklahoma State game. No matter what happens this weekend, though, teams such as Texas, Baylor, Oklahoma, Kansas State and perhaps Iowa State have more important matters to address later in the month.

“I don’t think (the Big 12 tournament) is going to change much as far as seedings go (for the NCAAs),” Texas coach Karen Aston said. “Even if we win it, I don’t think we’ll be a 1 seed.”

Texas should certainly be among the top 16 teams in the nation when the NCAA selection committee announces its tournament pairings on March 13. That would give the Longhorns first- and second-round tournament games at the Erwin Center for the second straight year.

“Our body of work has put us in a position to host,” Aston said.

Texas (22-7, 15-3 Big 12) is coming off a much-needed 69-61 victory over Kansas State on Monday, the final regular season game for both teams. For a team that had lost its previous three games at Oklahoma and at home to Baylor and Iowa State, it was important to beat the Wildcats to regain some momentum the Longhorns had during their 19-game winning streak.

“I don’t want to say we limped to the end of the conference season, but we looked like a team that was ready to move to the next step,” Aston said. “The last couple of games we looked like we were in quicksand.”

The Longhorns got another bump of confidence Wednesday when the Big 12 gave Texas the four biggest regular-season awards for the 2016-17 season.

“It just shows that our program is heading in the right direction,” said Taylor, who earned her first double-double (12 points, 11 rebounds) in the victory over Kansas State. “We’re getting this program back to where it’s supposed to be.”

McCarty sounded happier about Taylor winning defensive player of the year than she was about her own award.

“I’d say Bre works harder than anybody on this team,” McCarty said. “I’d put her up against anyone in the country any day. You’re not going to get by her. Getting that award probably boosts her confidence. It lets her know that she’s important for us. Now the whole world is seeing that she’s important, too.”

Texas enters the Big 12 tournament with an all-time record there of 23-18 (.561). The Longhorns are looking for their first conference tournament championship since 2003.

Baylor is 35-12 in the conference tournament and has won it the last six years.

Taylor, who will close out her basketball career this month, recognizes the tradition of Longhorns basketball.

“The goal here is to win the Big 12 championship and make a great run through the NCAA Tournament,” she said. “Winning all these individual accolades is great, but the team is the ultimate thing.”

Texas’ spring roster: What kind of offensive hand as Tom Herman been dealt?