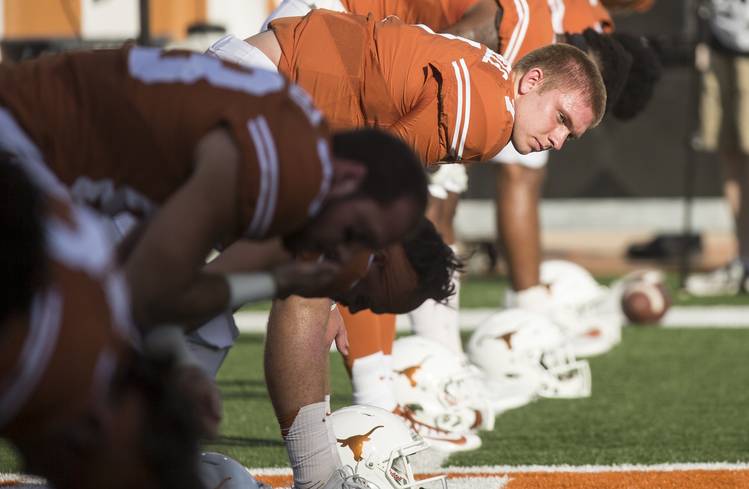 Tom Herman spent his first three months on the job leveraging his biggest asset — being undefeated.

Under his direction, the Longhorns have expanded their football support staff, set in motion millions worth of facility improvements and generated some serious social media buzz with a 140-character blitzkrieg.

“We will work day and night to make sure we bring Texas football back to its rightful place,” Herman told UT basketball fans at the Erwin Center last weekend.

Running backs coach Stan Drayton oozes enthusiasm, too. “We are almost on the edge of our seats to be the ones, the staff, the players to get this place back on a trend of winning like it should be,” he said.

On Tuesday, this rebuilt vessel finally sets sail. Texas opens spring practice with an eye on charting a new course and leaving the shipwrecked Charlie Strong era far, far behind.

“I think it will be competitive in terms of jobs,” defensive coordinator Todd Orlando said. “We’ll find out who cares the most, who goes the hardest and who’s the toughest guy.”

By the spring game on April 15, Herman may have a different view of his roster. As of now, “There are no starters on this team. Zero, none, it doesn’t exist.”

Nor should there be.

As Texas prepares to open spring football, here are six key Longhorns who really need to make a good impression on both teammates and the new coaching staff.

Shane Buechele, quarterback. In a normal scenario, the returning starter, especially one who set freshman school records, would be installed atop the depth chart and nobody would blink. But coming off a 5-7 season, nobody should feel safe, not even Buechele.

It was learned in February that Buechele had muddled through his freshman season with a thumb injury. He still threw for 2,958 yards with 21 touchdowns and 11 interceptions. He wasn’t a real vocal leader, but there really wasn’t anyone who could challenge him for playing time, either.

Freshman Sam Ehlinger, a mid-term enrollee from Westlake, will likely never say anything negative about Buechele publicly. But anyone who’s been around Ehlinger knows that he’s a competitor who will relish the chance to swoop in if Buechele stumbles.

Malik Jefferson, linebacker. Whether he was ready or deserving or not, the sophomore from Mesquite was promoted as the face of the defense and the Longhorns.

It’s not like Jefferson sought out such publicity; it happened organically. Once the train left the station, it was impossible to stop.

Jefferson struggled to play up to the hype. He finished third on the team in tackles and went through a well-publicized mid-season slump. Was he being played out of position as a middle linebacker? Nobody can pin blame on Strong or defensive coordinator Vance Bedford anymore.

“You’ve got to produce in this business,” said Orlando, who plans on converting Jefferson into a rover. “It’s a production business, and you’ve got to make plays.”

John Burt, receiver. No player fell out of favor harder last season than Burt, the team leader in receiving yards as a freshman in 2015 who slipped to eighth in that category last season.

Burt, once known as a home-run deep threat, averaged just 11.2 yards per reception and made only one touchdown catch as a sophomore. He dropped catchable balls and gave way to Armanti Foreman and Devin Duvernay.

Burt is a fascinating athlete. He dreams of competing in the hurdles at the Olympics someday. For now, he’s content to bypass track this spring so he can focus on football, a decision that could have huge benefits long term with a new offensive staff.

Charles Omenihu, defensive end. Two years in, the most searing image of Omenihu’s time as a Longhorn is his on-field, post-game meltdown after Texas lost at Kansas last season, a game that sealed Strong’s fate as the head coach.

Omenihu finished the season with 3.5 sacks, but didn’t have a single one in the last four games. That’s the same amount Naashon Hughes had, and he didn’t have much impact in the final six games, either.

Defensive line is one of this team’s biggest question marks. Orlando said he wants the linemen to slim down during the offseason and be more flexible. For all the excitement over Breckyn Hager and Malcolm Roach’s pass-rushing skills, there’s not much in the way of reliable defensive anchors.

This is a defensive coaching staff that said goodbye to All-American defensive tackle Ed Oliver at Houston. Presumably, Texas should have similar caliber players. Herman would sure like to see it.

Holton Hill and Davante Davis, cornerbacks: One of the biggest mysteries of last season still involves the two players that were once labeled two of the best defenders in the locker room.

Oklahoma speedster Dede Westbrook didn’t really care. He turned on the jets and blew past both of them at the Cotton Bowl.

Hill finished the season with 21 tackles and little else. Davis had 15 tackles. Combined, the two had only three pass breakups.

Kris Boyd and John Bonney ended up playing more as the season went on. The Longhorns finished seventh in the league in pass defense, allowing 258.5 yards per game.