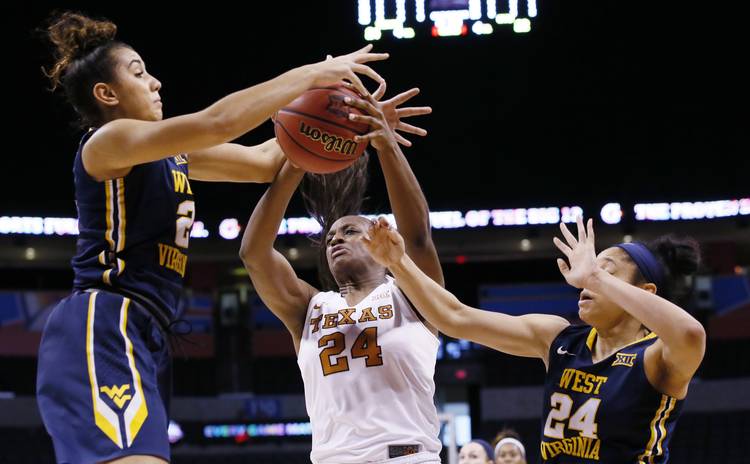 OKLAHOMA CITY — Karen Aston hopes the team that reeled off 19 straight victories in December, January and February finds itself before the NCAA Tournament convenes in 10 days.

Aston, whose team has gone 2-4 since the streak ended, said the Longhorns were “out-competed” during a 62-59 loss to West Virginia in a Big 12 Conference Tournament semifinal Sunday at Chesapeake Energy Arena.

An anticipated rematch with Baylor vanished when Brooke McCarty’s 3-pointer in the waning seconds bounced off the rim.

Instead, West Virginia, the No. 6 seed in the tournament, advances to play Baylor in the Big 12 championship at 8 p.m. Monday.

“It’s disappointing because you never want to be in a situation where you say you were out-competed,” Aston said. “When it came down to loose balls, getting stops, being mentally tough, you just need to finish.”

If some thought West Virginia (22-10) was an NCAA “bubble” team before the Big 12 Tournament, the Mountaineers scrapped that theory. With consecutive victories over No. 19 Oklahoma and No. 12 Texas, WVU should be sitting pretty next week, Aston and West Virginia coach Mike Carey said.

The Mountaineers were led by fiery forward Tynice Martin, who scored a game-high 29 points. Martin appeared to seal the game with a pair of free throws to give her team a 60-56 lead with 14.8 seconds to play.

Texas, though, cut the margin to 60-59 when McCarty drilled a 3-pointer from the right with 9.5 seconds left.

West Virginia guard Chania Ray extended the lead to 62-59 with 6.5 seconds to play. That gave Texas one last shot to tie the game and send it into overtime.

Texas guard Ariel Atkins fired an inbounds pass to McCarty, who had a clear look at the rim. But the Big 12 player of the year came up short, and WVU rebounded the ball to ice the game.

“When we came down here, our goal was to win the championship,” Martin said. “I feel like the energy we brought to the tournament led us today.”

WVU’s sudden surge has Carey wondering why his team was only 8-10 in Big 12 games this season.

“If I knew the answer to that, I might not be here,” he said.

Atkins, for one, was not pleased with her team’s overall effort, especially in that pivotal second quarter.

Atkins said she felt “terrible and disappointed” that her team wasted an opportunity to win a conference championship.

“It was my job as one of the leaders on this team to make sure we show up every day, so I’ll take that,” she said.

So what’s next for Texas?

“Before the tournament started, I thought our body of work was good enough that we put ourselves in a position to host (first- and second-round NCAA games),” Aston said, “and I still feel that way.”

Texas’ 2018 recruiting targets shine at The Opening in Dallas