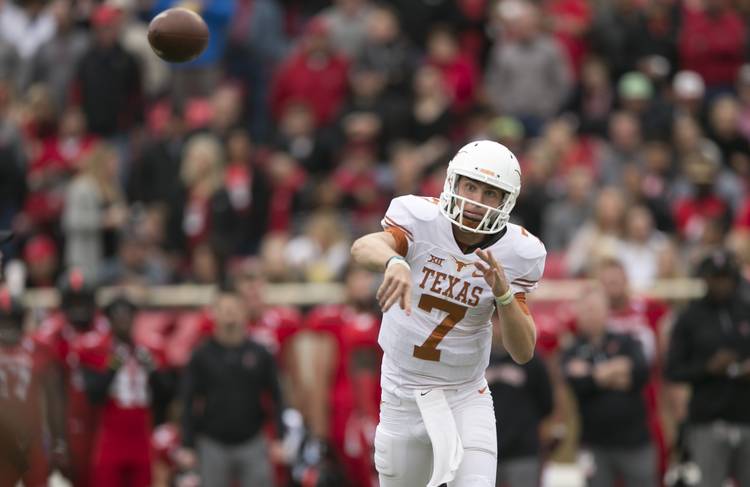 Once again, Texas will exit the spring without a starting quarterback.

Head coach Tom Herman said Monday that he will not name a starting quarterback during spring drills, which begin Tuesday. Herman said he’ll likely pick a starter — presumably either sophomore-to-be Shane Buechele or early enrollee Sam Ehlinger — within the first week of training camp this August.

“We’ll have an idea (after spring ball) and we’ll have that conversation with those kids, too, on where they kind of stand, but I think it’s important that they at least have the ability to go win the job in training camp and really win the job over the course of the summer in terms of leading their teammates,” Herman said.

Monday’s announcement gives Texas an open competition at the quarterback position for a third straight year. Former coach Charlie Strong waited until the week of Texas’ season opener at Notre Dame in 2015 to anoint then-junior Tyrone Swoopes. Then last year, Buechele wasn’t publicly acknowledged as the starter until the first series against the Fighting Irish.

Over the next couple of months, Buechele will battle Ehlinger for the job. Buechele set a freshman-year standard at Texas when he threw for 2,958 yards, but his lack of success in the running game (1.7 yards per carry) has led to questions whether he can direct Herman’s offense.

Ehlinger suffered three different injuries during his senior year at Westlake, but the four-star recruit compiled 5,252 yards of offense and 71 touchdowns as a junior.

There will also be a competition behind Buechele and Ehlinger. Herman said that rising sophomores Matthew Merrick and Josh Covey are in the conversation to be UT’s third-string quarterback. Merrick, who’s on scholarship, was a three-star prospect when he arrived at Texas in 2015. Covey is a walk-on from Georgetown’s East View High, and Herman complemented his athleticism on Monday.

With Merrick and Covey competing for snaps, Jerrod Heard will stick with route-running. Heard was Texas’ starting quarterback for 10 games in 2015 before moving over to wide receiver last year. Herman said he wants Heard to focus on being a receiver, but that the offense may install a few plays for him this summer if Merrick or Covey can’t win the third-string job.