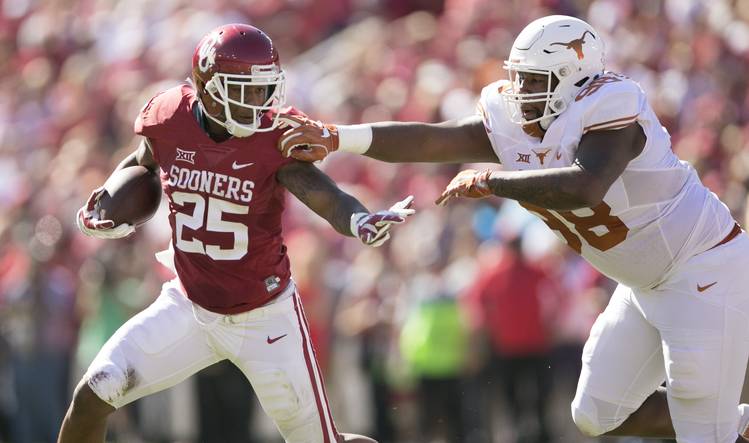 Texas defensive coordinator Todd Orlando tried to be diplomatic last month when he addressed the sheer size of his defensive linemen.

“We’re a little bit too heavy up front,” Orlando said.

One day before the start of spring drills, the head coach offered a more brutal, gut-busting assessment.

“The effort as a group has not been to our requirements here in this program,” Tom Herman said Monday. “I think we’d know a lot more if some of these really fat guys lost some weight.”

The defensive line’s sheer girth and the lack of depth at tight end appear to be Texas’ biggest concerns as the curtain rises on spring drills. The first of an NCAA-allowed 15 practices will be Tuesday. All practices are closed to the public.

Herman touched on both topics and others during an hour-long press conference. It was far and away the longest on-the-record session any high-profile UT coach has held with reporters in years. “Live on Longhorn Network!,” Herman joked at one point.

But Herman was serious, offering his theories on why the players have bought into a new system. They understand three straight losing seasons is unacceptable. “Here, I think our guys are embarrassed,” Herman said, “and they understand that change is necessary in order to achieve some results.”

On the most serious topic imaginable at Texas, Herman said there will not be a starting quarterback named after spring drills. “I think it’s important they have at least the ability to go win the job in training camp and win the job over the course of the summer,” he said.

And Herman was playful, teasing reporters and telling sports information director John Bianco that he would gladly go far beyond the allotted time frame.

“Why do we only have time for two more? Because of Longhorn Network?” Herman said, drawing laughs in the room.

Said Bianco, “Because you got something coming up.”

Herman, now three-plus months into the job, finished up the hour and looked as relaxed as can be. In the aftermath, his comments about the defensive linemen stood alone as a stinging rebuke.

Nutrition has been a hot topic on social media the last few days. At the NFL scouting combine, Doak Walker winner D’Onta Foreman said UT didn’t have anyone “to tell me what to eat or how to eat certain things.” The Longhorns have five full-time nutritionists and dietitians.

The NCAA allows for unlimited snacks now. The defensive linemen have been eating plenty, it seems.

“What does their body really look like?,” Herman said. “Right now, I don’t know. We’ve got some guys who are 360, 350 pounds. I don’t know how you move at that weight. We’re working on it. We’re certainly not going to throw our hands up and say, ‘Woe is me.’ Last time I checked, you’ve got to play with a defensive line.”

Former coach Charlie Strong always liked to say “big guys beat up little guys.” He wanted anchors in the middle, heavyweights that could hold the point of attack while the defensive line and linebackers made plays. In April 2016, then-defensive coordinator Vance Bedford said any freshman who arrived on campus more than 300 pounds would play immediately.

The Longhorns had so-so results clogging up the middle and stopping the run under Strong. The unit was fifth in the Big 12 last season in that category, allowing 189.8 yards per game.

Herman and his defensive staff have a far different philosophy on the ideal size and shape of those up front.

“I’ve seen Todd Orlando make chicken salad out of some lesser parts,” Herman said, “so I have a lot of confidence in that staff and what they’re able to do with whatever talent that we’ve inherited.”

Any fans who get squeamish at brutally honest commentary about their favorite team should skip the press conferences for the time being. By the end of spring drills, Herman said, “I want them to know what champions practice like. I want that to be fully ingrained.” At times, holding players accountable can feel like being a policeman, he said.

“You have to set the expectation level early when developing a culture and developing a program,” Herman said, “and I would hope that after 15 practices, they know what that expectation is.”

Buechele vs. Ehlinger competition won’t be decided until August for Texas