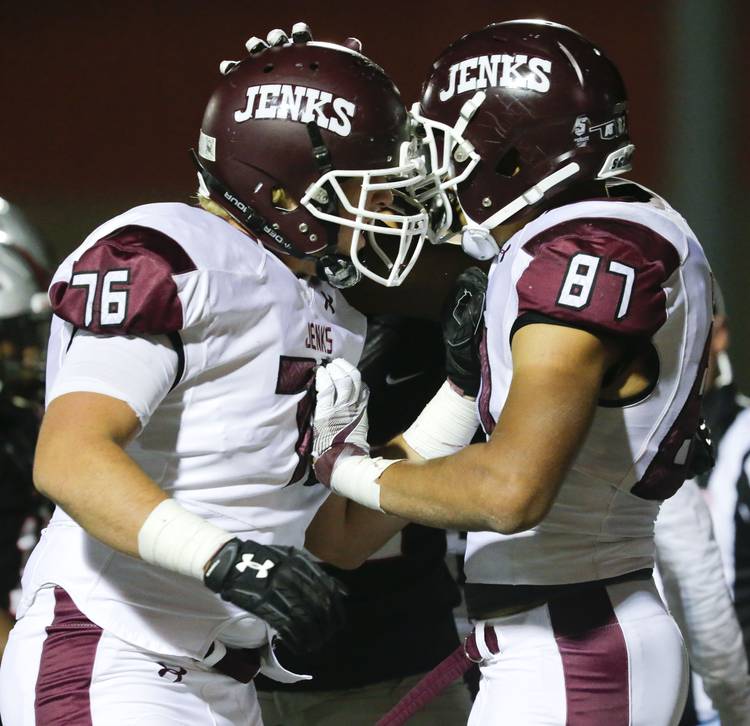 Jenks', Reese Leitao, 87, celebrates after scoring a touchdown against Union in the Class 6AI semifinal game between Jenks and Union at Owasso Stadium in Owasso, Thursday Nov. 18, 2016. JESSIE WARDARSKI/Tulsa World

Reese Leitao’s association with Texas’ football program may not be determined until this summer, Longhorns coach Tom Herman said Monday.

Leitao, a tight end from Jenks, Okla. who signed with Texas in February, was arrested last week for possessing or delivering a controlled drug within 1,000 feet of a school. Released on a $15,000 bond, he’s next scheduled to appear in court on Tuesday.

In a statement last week, Herman said Texas would let the legal system “run its course” before making a decision about Leitao. While speaking to reporters on Monday, the day before UT’s spring football workouts begin, Herman reiterated that stance. He added that he had spoken both to Leitao and Leitao’s parents, and that a proper resolution needed to be made by this summer.

“The standing is that we’re not a court of law. We’re not into that,” Herman said. “So I think we’re going to reserve judgment for once we get some resolution as to the severity, if any, of any crimes that he might have committed. Again, right now it’s allegation at this point.

“But at the same time, I think if that resolution — and I’ve had this conversation with him and his parents — that resolution needs to be sped up maybe than what a normal court process might be because I’ve got to know something somewhere around the summer as to whether we’re going to allow him to be part of the team or not.”

Leitao’s arrest, as well as Andrew Beck’s broken left foot, has left question marks at tight end, which was already a position that was ripe for scrutiny. Herman also said Monday that Garrett Gray had been moved to tight end.

Gray, a junior-to-be from Marble Falls, has been both a wide receiver and tight end during his time at Texas. He has yet to record a catch, though. Herman noted the 6-4, 230-pound Gray was “probably a year away just from a mass standpoint, to be big enough at that position.”

In his own words: Translation of Tom Herman’s spring football press conference

Buechele vs. Ehlinger competition won’t be decided until August for Texas