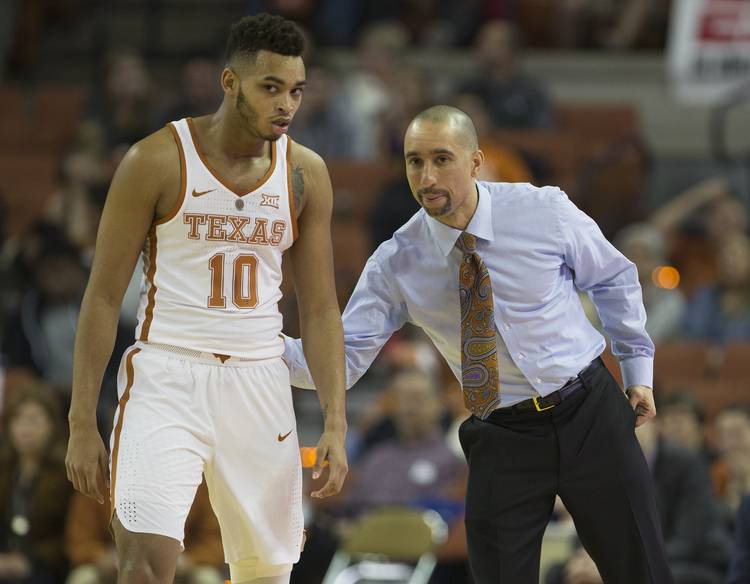 Texas coach Shaka Smart has remained upbeat with his players, like Eric Davis Jr., all season long. RICARDO B. BRAZZIELL/AMERICAN-STATESMAN

KANSAS CITY, Mo. — Eric Davis Jr. and Kerwin Roach Jr. both came to Sprint Center last October with big dreams about the upcoming season. The next four months turned into a nightmare.

The two Texas sophomores were back in the same building Tuesday during a 40-minute shoot-around prior to the Big 12 tournament. The Longhorns, picked to finish third in the preseason, will instead be the No. 10 seed after finishing last in the league race with an astounding 10-21 overall record.

“It’s been up and down a little bit. It’s human nature,” Davis said. “(Coach Shaka Smart) always tells us it’s human nature to be down, but don’t be bummed out. Just be angry. There’s a difference.”

Smart’s hit all the right notes since last Saturday’s 75-64 loss to Baylor, Texas’ 21st loss, which is the most in 33 years. One more loss will tie the 1982-83 Longhorns for the most losses in program history. Thankfully, that record cannot be broken this season — only matched.

The 4-14 mark in league play is the program’s lowest since the formation of the Big 12. And they are 0-14 this season in all games played away from the Erwin Center.

But the postseason is a fresh start, Smart told the Longhorns. All it takes is one victory against No. 7 seed Texas Tech (18-13, 6-12 Big 12) on Wednesday to get some momentum going.

Look at what happened at the Horizon league tournament, he implored. Smart pointed out that 10th-seeded Wisconsin-Milwaukee (11-23) rattled off three wins to reach Tuesday’s Horizon title game. So yes, it can be done. It’s March. It’s maddening.

“If we had the opportunity to go do that,” Smart said, “I think we’d be catching a lot of people by surprise.”

If players are going to dream, might as well dream big. At this point, every Big 12 team is 10 consecutive wins away from a national championship. No. 1 seed Kansas must travel the same road to glory as Texas. The Jayhawks’ mileage may vary, though.

“We’re starting a whole new season,” senior Kendal Yancy said. “We’re 0-0. We have the opportunity to go 4-0 and get ourselves a ring. Getting a ring can erase all the negative stuff that happened in the past.”

Said Davis, “We want to stay positive, as much as we can. it’s the postseason. Like coach said, we’re 0-0. We can dictate our own future.”

If nothing else, the Longhorns should feel good knowing they split the regular-season series with the Red Raiders. Both teams won their respective home courts.

Texas fans don’t believe in playing for pride, but this group has never laid down. Every night out, the Horns play hard for long stretches. But ultimately, as Smart pointed out, “When we come out of a timeout where we’ve been playing well, we can’t let the other team go on an 8-0 run or a 12-2 run. That’s been almost like clockwork this year.”

Texas Tech coach Chris Beard has suffered through some difficult moments, too. Just this month, the Red Raiders have dispatched the Longhorns only to turn around and suffer a demoralizing 61-48 loss at Kansas State.

Beard said, “I don’t know that there’s any value” in that win over UT on March 1. Like Smart, he said the postseason is a whole different ballgame. Now’s the time players take over and coaches take a step back.

“I said it a couple of weeks ago that nobody was looking forward to playing this Texas team,” Beard said. “I kind of jinxed myself, because we’re sure not.”