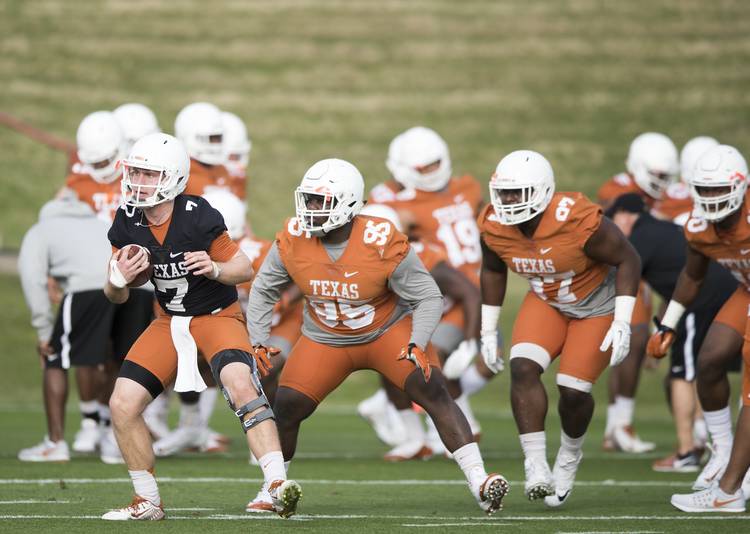 Texas football players work out during a spring practice on March 7, 2017. RICARDO B. BRAZZIELL/AMERICAN-STATESMAN

With the Denius Fields serving as his classroom, Tom Herman got to teaching on Tuesday.

Texas opened its spring drills on Tuesday with Herman leading the first of 15 pre-summer practices with the Longhorns. Hired away from Houston in November, Herman got his first chance to teach the do’s and don’ts of his football syllabus.

Loaf and forget about ball security? That’s a good way to fail a test.

Herman was quick to say that nobody stood out — for good or bad — during Texas’ first practice. That didn’t mean, though, that quarterback Shane Buechele didn’t draw the ire of offensive coaches because of poor ball security. Poona Ford’s hustle earned the 310-pound defensive tackle the day’s only attaboy.

The Xs of Os weren’t of the upmost importance to Texas’ new coach.

Herman got his point across during the opening minutes of his first UT practice. A stretching period that should have lasted eight minutes went 20.

“They kept testing the fence,” said Herman, mimicking the buzzing noise of an electric fence.

Afterward, Herman expressed annoyance about the understanding of his “Plus two” rule. While the Longhorns were asked to run 10-yard sprints, Herman expects the players to go 12 yards. Due to the failure of some to hit that 12-yard mark, Herman restarted the drill several times. He even cut the music at one point so that everyone — including a few media members in attendance — could hear which players were being called out.

“I may have gotten 10 reps today,” said defensive back P.J. Locke, who analyzed that Herman’s message was received by a team that was getting accustomed to practicing again.

Herman inherited a team that went 16-21 in three years under Charlie Strong, with a high-water mark of Strong’s inaugural 6-7 season in 2014. While meeting with the media on Monday, Herman recalled his first team meeting in which he asked for the players with ties to Texas’ last winner — Mack Brown’s final team that went 8-5 in 2013 — to raise their hands. Defensive back Antwuan Davis, linebacker Naashon Hughes and punter Mitchell Becker were the only ones.

Even though it’s been three years, Hughes said he is still aware of what it takes to win. With his new coach carefully watching something as simple as sprinting, Hughes said that lesson will be taught in Texas’ on-field classroom.

“It’s not hard for me to tell a guy to come on or anything like that because the coaches are doing it too,” Hughes said.