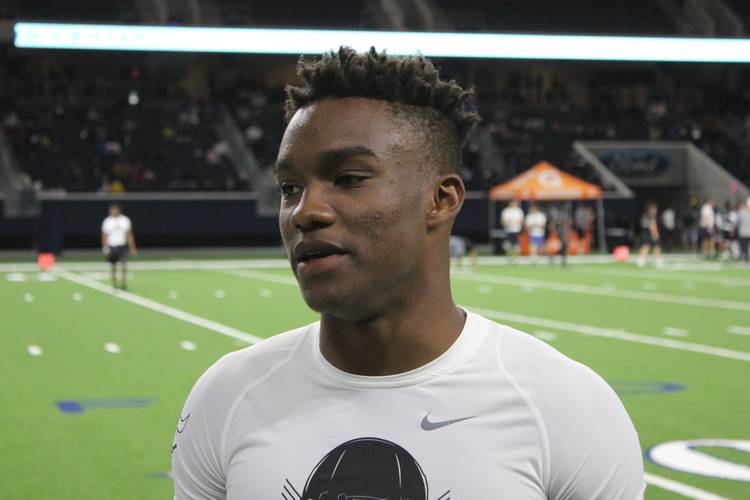 Rockdale's Jaquayln Crawford at The Opening in Dallas. (Mike Craven)

Some of the state’s top talent, along with a strong number of prospects from bordering states, converged on Dallas this past Sunday for The Opening regional. Several offensive players stood out, including Oklahoma offensive tackle Brey Walker, who was one of three total prospects to receive an invitation to The Opening Final this summer in Oregon.

Excluding players like Walker, a five-star recruit committed to Oklahoma, here were the top five offensive performers with Texas interest. A few of these players hold offers, while others could receive an offer from Tom Herman before the end of the cycle.

There was a solid group of offensive linemen at The Opening. One of the top five performers was Ghirmai, a tackle whose recruitment is gaining steam across the nation. After recently receiving an offer from Alabama, Ghirmai was selected to the “Final Five” of the offensive line group in Dallas. He uses his hands exceptionally well for a prep prospect. He’s strong at the point of attack and has good hip bend and flexibility. He’ll need to improve his feet to stay at tackle against speed rushers, but he has high upside at right tackle or even guard. Ghirmai was the most impressive offensive lineman from Texas at the event.

Ranked No. 28 on the American-Statesman’s Fabulous 55, Ezukanma impressed at wide receiver. His height and athleticism make him stand out among the other wide receiver prospects. At a legit 6-2, his height and length give him an advantage over all the cornerbacks for jump balls. Ezukanma bullied most cornerbacks in Dallas and couldn’t be covered by a single safety. He was clearly the best wide receiver in attendance and a player the Longhorns have spoken to recently about a potential offer. The wide receiver position is loaded in 2018 and Ezukanma is yet another potential target. He scored 27 touchdowns as a junior.

Fleeks is a hard prospect to figure out because of his position versatility. He could play running back or wide receiver at the college level. He’s mostly a slot receiver for Cedar Hill, but worked out at running back at The Opening and left the event convincing people he’s more than capable of handling 20-plus carries at the college level. His ability to catch out of the backfield give him an advantage in camp settings and he took full advantage. He toyed with linebackers in coverage and in space. Fleeks recently committed to Baylor, where his former high school head coach is now an assistant, but don’t be shocked to see Texas send him an offer sometime in this cycle.

The reason: Crawford is a two-way player for small-school Rockdale. He prefers offense, which is where he played Sunday. He’s a smooth athlete. He runs crisp routes and possesses consistent hands despite not playing wide receiver full-time at any time in his prep career. Crawford’s athleticism is unquestioned and he made a few cornerbacks look silly on double-moves. He’s also one of the more elusive players in the state when he gets in space, which was on display in a few drills Sunday.

Williams is a high school quarterback and has been starting at the varsity level since his freshman season. You’d never know he wasn’t a full-time slot receiver after his performance at The Opening. He played wide receiver, which is where he projects at in college, and he shined. Williams showed excellent route-running ability and surprisingly consistent hands. Williams’ stock could soar over the summer and into his senior season since he’s prepared to move away from quarterback in college.