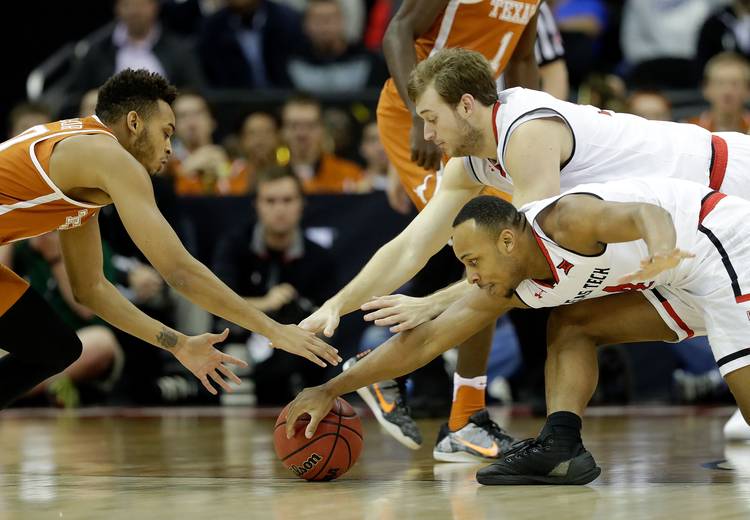 Eric Davis Jr. #10 of the Texas Longhorns, Shadell Millinghaus #4 and Matthew Temple #34 of the Texas Tech Red Raiders scramble for a loose ball during the first round of the Big 12 Basketball Tournament at the Sprint Center on March 8, 2017 in Kansas City, Missouri. (Photo by Jamie Squire/Getty Images)

KANSAS CITY, Mo. — For a brief moment on Wednesday, literally a flash, Texas fans finally saw what they’ve been clamoring to see for two years.

Texas guard Andrew Jones knocked the ball away from Texas Tech’s Devon Thomas. Then, UT senior Kendal Yancy dove for it headfirst into a scrum. Somehow, Jones wound up with it while tiptoeing the sideline and saw Kerwin Roach Jr. sprinting the other way. Jones whipped the ball to Roach, who got fouled intentionally.

According to the official stats, it was all over within two seconds. But it was an uplifting moment in a season that’s gone horribly wrong and one that ignited a 61-52 come-from-behind win at the  Big 12 tournament.

Where the heck has this effort, this intensity been all season?

“Coach always talks to us about making winning plays,” Jones said. “That was a winning play.”

Indeed, it was. The 10th-seeded Longhorns (11-21) snapped a seven-game losing streak. This was the program’s first win in more than a month. Perhaps of more importance, they broke that other ugly stat; UT is now 1-14 in road and neutral-site games this season.

Texas will face No. 2 seed West Virginia at 6 p.m. Thursday in the quarterfinals at Sprint Center. The Mountaineers (24-7) swept the regular-season series, but the Horns have always matched up well against coach Bob Huggins’ bunch.

Roach did plenty of work before drilling his two ensuing two free throws. He finally slammed home one of those right-down-Broadway dunks, something the sophomore’s been trying to do for two seasons. Then, Roach drilled back-to-back 3-pointers that got the Horns within three.

All of this was part of an 18-2 run. Usually, Texas has been on the receiving end of those spankings more times than not. But this time, the Horns took a 49-44 lead despite an awful first half where they were a dreadful 1 for 13 shooting from 3-point range.

Simply put, the final 10 minutes were terrific. The capper was a holy-moly, alley-oop dunk by Roach from Jones, which gave the Horns the five-point lead. That play, along with Jones’ one-handed flush in the closing seconds, were true highlight-reel moments.

“We were feeling it,” said Roach, who finished with 13 points. Jones had 15 points despite going 1 for 6 from 3-point range. Jarrett Allen added 10 more, and Mo Isom had two big 3-point shots en route to seven points.

From Texas Tech’s standpoint, this was an epic meltdown. Normally, coaches come to the press conference and give an opening statement. Tech’s Chris Beard blurted out, “Just answering questions.”

Three Red Raiders finished in double figures, but Tech was outscored 41-26 in the second half. Beard’s team shot 39 percent after the break while Smart’s crew shot 52 percent. This was after it took the Longhorns almost 12 1/2 minutes just to reach double figures.

“Credit to Texas,” Beard said. “They started to knock down shots and make some plays, but they executed in the last 10 minutes of the game and we didn’t. That was kind of the bottom line.”

"I'm proud of the fact that they didn't want to go home."

In the winning locker room, there was an undeniable sense that a weight had been lifted

“It starts with a mentality of, ‘I’m playing for Texas. I’m going to do whatever I need to do for Texas on this possessions, whether it’s dive on the floor, set a screen or go get a rebound.’ When you have that clarity of purpose in your mind, you can be your best,” coach Shaka Smart said. “We played much, much closer to our best during that stretch.”

As a result, Texas plays on.

"We've got three seniors on our team who we're playing for."@TexasMBB's Kerwin Roach talks about the motivation for his big game. pic.twitter.com/yBr2z5reLg

“All it takes is one win to get the ball rolling”

‘It really is a family there’: Texas targets talk about the Longhorns at The Opening