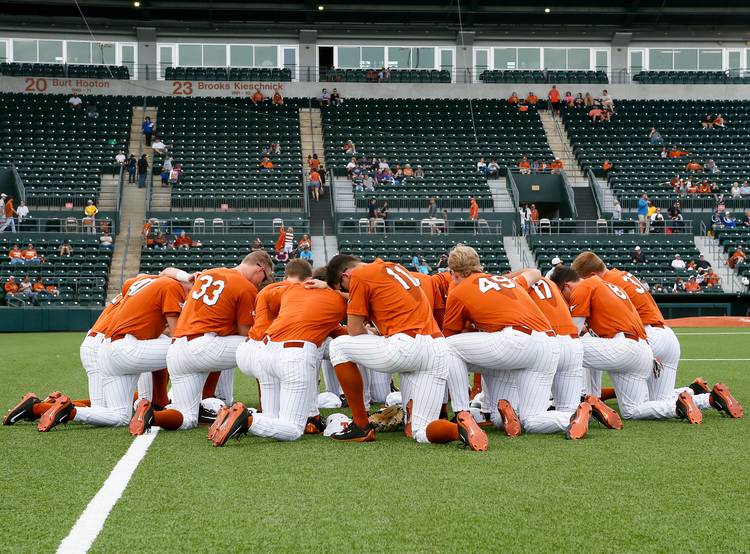 Led by a first-time starter, Texas used 15 hits to produce 15 runs in a mid-week shutout of Texas A&M-Corpus Christi. Wednesday’s game was called after the Islanders batted in the seventh inning, but Texas still put together its best offensive showing at UFCU Disch-Falk Field since a 16-run effort against Maryland in 2011.

As a sweetener for its 9-0 win over Richmond the previous evening, Texas wore throwback uniforms that honored its 1949 and 1950 national champions.

“I think they beat us the last two years,” sophomore outfielder Tate Shaw said. “We come into every game with the mindset that they’re really good.”

By the end of Wednesday’s second inning, eight different Longhorns had collected a hit and scored. The lone outlier in Texas’ line-up was freshman Ryan Reynolds, who drew a walk in his first at-bat. Islander starter Cole Carter was pulled with two outs in the second session, but 12 Longhorn runs ballooned his ERA from 3.09 to 10.80.

The last of Carter’s 64 pitches was delivered to Patrick Mathis, who crushed the offering over the right field fence.

Shaw nearly homered two innings later, but he settled for a double off the wall. A first-time starter on Wednesday, Shaw turned two doubles into the first two hits of his collegiate career. Shaw, who is the younger brother of former Texas outfielder Collin Shaw, scored three times.

Shaw was one of 10 Longhorns with a hit on Wednesday, and seven of his teammates scored.

“We were in attack mode, and that’s what we want to be,” Shaw said.

Sophomore Nick Kennedy started for Texas, and the left-hander threw just 58 pitches and retired 12 of the 13 batters he faced. Jon Malmin, Beau O’Hara and Chase Shugart each threw an inning of relief as Texas limited the Islanders to four hits.

“The thing about Nick is he wasn’t throwing, he was pitching,” said Texas coach David Pierce, who will open a three-game series at home against UCLA on Friday. “He has great stuff. He had great tempo and he controlled the game. I thought he was outstanding.”

Rounding the bases: Texas has shutout opponents in back-to-back games for the first time since 2015. That year, the Longhorns blanked Minnesota in three straight games… Freshman Andres Sosa picked up his first collegiate hit with a sixth-inning single… Texas freshman Austin Todd went 3-for-3 with three RBIs, three runs scored and a walk. The Round Rock native had two hits and three RBIs against Richmond on Tuesday… Georgetown graduate Lukas Hermanson started at catcher for Texas A&M-Corpus Christi. A senior, Hermanson went 0-for-2.