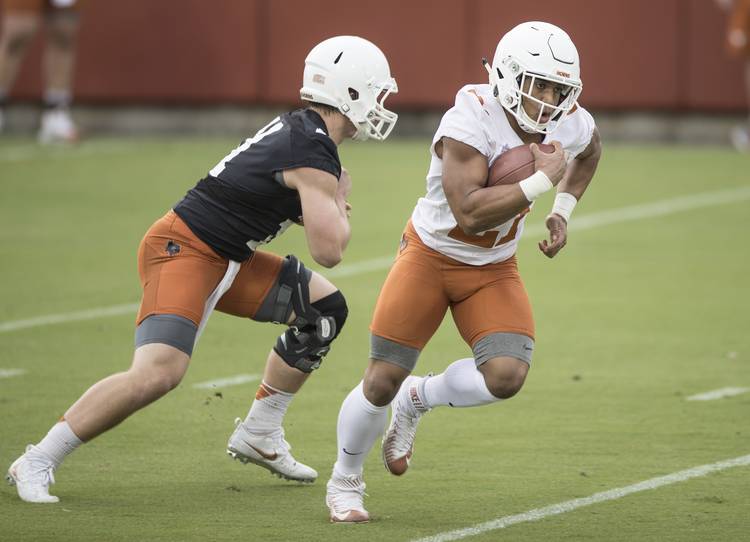 After only two practices, Texas’ spring schedule will be interrupted by a previously scheduled vacation.

The football team wrapped up its second spring practice with new coach Tom Herman on Thursday. But the university’s about to go on spring break, which means UT players won’t return to the practice field until March 21.

When practice resumes, UT’s most veteran starter will be on the sideline. Herman said Thursday that junior safety Jason Hall will likely miss the rest of the spring with a hamstring injury. Hall, who left the Denius Fields on crutches, has a team-leading 28 starts under his belt.

Herman said that Hall’s “fairly significant strain to his hamstring” would not need surgery. He is expected back for summer conditioning.

“Pretty good pull that needs some time off and some rehab,” said Herman, who also has tight end Andrew Beck (foot) and punter Michael Dickson (hamstring) out with injuries.

After his second practice at Texas — which was eventually moved indoors due to weather — Herman reiterated his stance that these early workouts are less about the playbook and more about establishing practice habits. He wasn’t willing to give a scouting report on his new players.

“I’m never going to comment on anybody’s performance in shorts. It’s not football,” Herman said. “We’ll wait and see Tuesday after spring break. It will be a good (indication) of who stands out.”

Sophomore running back Chris Warren III said his spring break schedule will feature workouts. Left tackle Connor Williams said the weight room needed to be a destination next week for him and his teammates, although he admitted he may spend a day or two at the beach.

Herman said the idea of waiting to start spring workouts until after UT’s spring break was floated around, but he didn’t like the idea of cramming 15 practices into a four-week period. He also didn’t want the possibility of those post-break practices conflicting with the coaches’ recruiting schedules.

So Texas will instead reconvene for a team meeting on the Monday following the break. The Longhorns will be in pads for the first time the next day, and that practice will be partially used as a refresher of what was learned this week.

Texas will hold three practices a week during three of the next four weeks, the exception being a four-practice stretch from April 4-8.

“I’d rather us go all the way through, but it is what it is; that’s how they wanted to schedule it,” Warren said. “We’re just going to go by what they say, because we’re trying to win around here. If we follow what they do, we’ll win.”