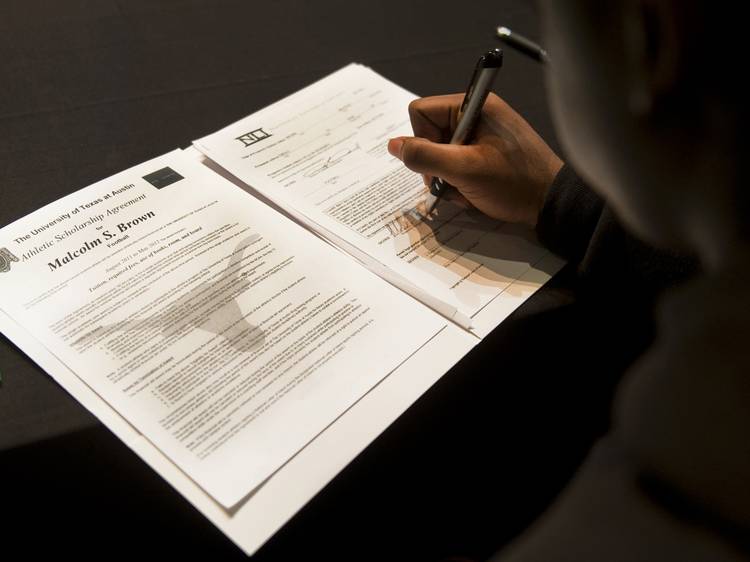 This is the year for Tom Herman to put his stamp on the Texas football program.

Not only in the fall, when the Longhorns suit up for their first season under Herman, but also behind the scenes in recruiting.

The Longhorns hold one commitment for the 2018 class — Ocala, Fla. wide receiver Justin Watkins — and are coming off a disappointing finish to the 2017 cycle, when UT’s class ranked 26th.

With expected attrition, Texas should be able to sign 20-25 players for 2018. This is what the perfect class would look like for Herman come Feb. 7, 2018.

It’ll be hard to find a blue-chip quarterback prospect in the state this cycle, which likely will force Herman’s staff across the border. The early offers already tell this story — UT has yet to offer an in-state quarterback. Gatewood has emerged as the Longhorns’ top target, and a potential coaching shakeup at Auburn, to which Gatewood is committed, gives Texas a chance to flip him. The 6-4, 232-pound prospect is a four-star player and the No. 1-ranked dual threat quarterback in the country.

Texas, which signed two running backs in 2017, don’t need to reload at the position. Ingram, who’s the only in-state running back that Texas has offered so far, is considered a UT lean. The 5-11 back is a four-star prospect who gets better with every touch. He’s a capable receiver out of the backfield, too. If Texas can get his commitment, it might shut down recruiting that position and focus elsewhere.

Texas needs to hit at least three home runs at wide receiver for 2018. The Longhorns have already landed one when Watkins flipped from Florida State after his UT junior day visit. He’s the No. 1-ranked athlete in the country and is expected to play slot receiver and return kicks for Texas. That leaves two more receiver spots. Eagles emerged as the state’s top 2018 receiver after his strong showing at The Opening in Houston last month; he also made it to Texas’ junior day and was given 1-on-1 time with coaches. Woodard isn’t being talked about enough because of the quality depth at receivers this cycle. There are three Houston Lamar players who have Texas offers, and locking up one of them will help getting the other two. Crawford, like Watkins, is an athlete who plays both ways. He also prefers offense, which is where Texas is recruiting him the hardest. His growing relationship with UT assistant Michael Huff gives the Longhorns a great shot.

It didn’t take Herman long to show that tight end was a priority position for him. Texas had de-emphasized tight ends toward the end of Charlie Strong’s tenure, so Herman moved quickly to sign two in the 2017 class. One of those, however, is facing criminal charges in Oklahoma and might not make it to campus. If that ends up being Reese Leitao’s fate, then Texas would search for multiple 2018 tight ends. Luckily for the Longhorns, a few exist within the state. Muhammad is the most college-ready tight end available and he built a strong relationship with the Texas staff when they were at Houston. The 6-4, 235-pound four-star recruit can run, catch and block.

In 2017, Texas signed a three-star guard and a three-star tackle. Strong left UT’s cupboard full of young and talented prospects for Herman to lean on for the next two or three seasons. Herman will need to reload with linemen for the future in 2018, though. A trio of top targets have emerged. Stratford visited UT for junior day and plans another trip to campus this coming weekend; Hines mentioned Texas as his leader at The Opening in Dallas on Sunday, but then backed off those statements; and Ghirmai’s stock is rising faster than any other offensive linemen in the state, and Texas appears to be in good position for him.

Texas’ biggest defensive needs are along the front line. The Longhorns need pass rushers and versatile big men who can play multiple positions along a 3-4 and a 4-2 defense that Todd Orlando likely will run. This list might change before signing day more than any other position because Texas is still searching for footing at this spot. Texas feels good about its status with Tatum and Cherry. Wright — the top-rated end in the state — is considered to be a Texas A&M lean, but the Longhorns made up ground at their junior day and success on the field this fall would put them firmly in the mix for not only Wright, but other top ends in the class as well.

The Longhorns failed to sign a defensive tackle in 2017, which means they’ll want at least two for the 2018 class. Coburn, a four-star bowling ball, is UT’s top target. Not only is he important because of his talent, but also because of his familiarity with the Texas staff. He’s from the same high school as Daniel Young, a 2017 running back signee. Texas tight ends coach Corby Meekins used to be the head coach at Spring Westfield, and now his brother is. Avery, from Bishop Dunne, could represent a private school pipeline for future recruiting classes.

Linebacker is a tough position to gauge at this point of the cycle because the Longhorns have extended only four offers to linebackers so far. Two of them — Hobbs and Orji — are from the state. Both possess the type of position versatility that Orlando wants in his linebackers and edge players. Orji is a middle linebacker with the athleticism to play on the outside. Hobbs is an edge player with the ability to stand up as a linebacker or grow into an edge rusher as a defensive end.

There’s no excuse for Texas to not sign blue-chip cornerback prospects in this class because there are several four-stars inside the state. The five-star gem of the class is Cook, the No. 1-ranked ranked player on the American-Statesman’s Fabulous 55. Cook and Jamison are teammates at Houston Lamar alongside wide receiver target Al’Vonte Woodard. Jamison and Cook are high on Texas and Herman’s staff has a good chance of gaining commitments from all three Lamar prospects. Green is the long shot in this scenario. He’s high on LSU right now, but never count out Herman in Houston, especially if Texas enjoys success on the field.

Safety is another position Texas should excel at in this cycle. The Longhorns are leading for Foster, a five-star prospect. And UT also is in good shape for Overshown, a rising prospect who was close to committing to Texas during his junior day visit. Texas feels good about eventually signing both, but adding one more elite athlete would be ideal. O’Neal is emerging as a real UT possibility after his junior day visit. He’s an enforcer with a big personality.

‘It really is a family there’: Texas targets talk about the Longhorns at The Opening