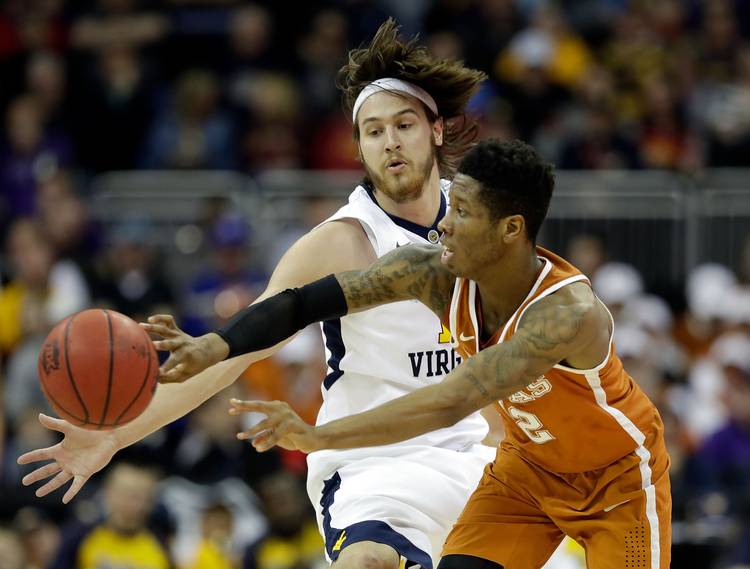 Kerwin Roach Jr. #12 of the Texas Longhorns passes around Nathan Adrian #11 of the West Virginia Mountaineers during the quarterfinal game of the Big 12 Basketball Tournament at the Sprint Center on March 9, 2017 in Kansas City, Missouri. (Photo by Jamie Squire/Getty Images)

Not only did the Longhorns finish last in the Big 12 race, they went 1-14 in road and neutral-site games. They ended the season having lost eight of their last nine.

Thursday’s 63-53 loss to 10th-ranked West Virginia at the Big 12 tournament was the team’s 22nd defeat of the year, tying the school record for the most in school history. Smart’s team somehow matched the 1982-83 squad, which complied a disastrous 6-22 record.

Any way you slice it, this 11-22 campaign was the worst season of Texas men’s basketball in more than three decades. Once it was over, Smart was asked if he’s more motivated than ever to get this thing turned around.

“For me? Hell, yeah. We’ve got a lot of work to do,” Smart said in a quiet locker room inside Sprint Center. “There’s incredible urgency. I think it’s really important to reflect and learn, but from there, it’s about moving forward and helping these guys move forward.

“It starts with me as a head coach. I’m the head coach,” he added. “I’ve got to make sure we do a better job in a lot of different areas over the next seven months. When that ball goes up in early November, we need to, want to be way, way better.”

The Longhorns could look dramatically different next season. Freshman Jarrett Allen was non-committal about whether he’ll return or jump into the NBA draft. Coaches, scouts and teammates have no idea what he’ll do.

Said Allen: “I’m proud of our team, honestly. We stuck through the season, kept fighting even though things weren’t going our way and never gave up. … We went through a bad season, but I’m not going to let that impact my decision.”

The Longhorns will add a new point guard in Matt Coleman and some other talented scorers. But sophomores Kerwin Roach Jr. and Davis will be back, as will freshmen Jacob Young and James Banks, two players who better live in a gym this summer.

“I knew there was going to be some ups and downs, but I didn’t expect us to struggle throughout the year like we did,” Jones said. “In the beginning things were going good, but once the competition started to increase and heat up, I thought we would be able to respond and eventually come tougher and gel as a team. Unfortunately it didn’t happen for us this year.”

The Horns came to Kansas City having lost seven straight. They broke that slide with a win over Texas Tech in the first round on Wednesday. The final 10 minutes were miraculous as the Horns woke up and roared to victory. The locker room had a celebratory vibe, as if some weight had been lifted.

“Beating Texas Tech, you could see the spark in everybody’s eyes that we have a chance to do this,” Allen said.

They were just as stunned as anyone else when TCU took down No. 1-ranked Kansas on Thursday afternoon. So yes, they figured, the Horns could absolutely clip the Mountaineers.

Allen, Jones and Davis all chipped in points during 14-7 run that tied things up at 27-27. However, Texas didn’t score a field goal in the final 7 minutes, 5 seconds before halftime, and West Virginia finished the period on a 10-1 run.

“Honestly, we didn’t really pay too much attention to what other teams are doing,” said WVU guard Jevon Carter, who scored a game-high 21 points. “It’s about us.”

Texas got back within four points on senior Kendal Yancy’s 3-pointer. But the Mountaineers put together another spurt, and Carter’s 3-pointer with 6:34 remaining felt like a dagger. WVU had a 57-46 lead at that point and cruised on to the Big 12 semifinals.

The Longhorns are headed home and cruising into an uncertain future. All anybody knows that what happened this season isn’t acceptable. Not at a football school. Not in a Power 5 conference. Not anywhere.

“It hurts, man. I’m not going to sit here and say it doesn’t,” Davis said. “It hurts me, I know it hurts other players and it definitely hurts coach. But i say let’s use that hurt as motivation. Get better, get back to the drawing board and remember this feeling.”

The beach or weight room? Texas players will resume workouts after spring break

Texas rallies past UCLA as Longhorns star in different roles