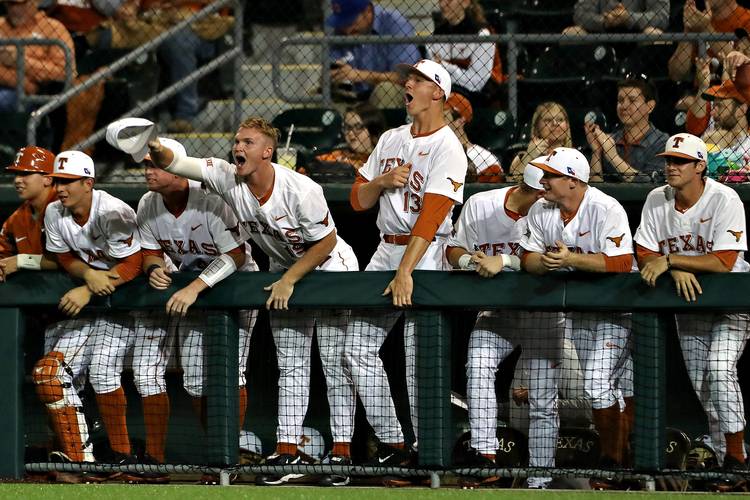 After another close call on Friday, the sighs of Texas were of relief.

Using an eighth-inning rally, Texas clawed its way to a 5-4 win over UCLA at UFCU Disch-Falk Field. Texas had been 1-4 in one-run games this spring. Two of those losses were suffered during last week’s road trip to Stanford, and an additional 5-2 loss to the Cardinal was finalized by a walk-off homer.

“We’ve been kind of digging for this comeback win given Stanford, we lost a lot of one-run ball games,” Texas junior Travis Jones said. “It was great for our comradery in the locker room and our confidence on the field.”

Texas (10-6) and UCLA (6-6) each hit two home runs on Friday, but Kyle Cuellar’s three-run blast put Texas in a 4-2 hole in the seventh inning. Patrick Mathis scored on a groundout in that inning’s bottom half, which set the Longhorns up for their comeback.

UCLA reliever Scott Burke retired the eighth inning’s first two batters, but he was pulled after a Ryan Reynolds single. Brian Gadsby, a six-foot right-hander who used a mix of arm motions during his deliveries, entered the game, but Jones tied the score with a full-count double to left field.

“You’ve got to play the game to its entirety, and that’s what we’re preaching,” Texas coach David Pierce said. “It was a big blow, they had a three-run home run late in the game. It affected (us) for a second. They had the ability to overcome that, and that’s a huge win for us.”

Texas went to its bench during its rally. Pinch-runner Tyler Rand scored the game-tying run, and pinch-hitters Kody Clemens and Zane Gurwitz also contributed. Clemens drove in Mathis when replaced designated hitter Tate Shaw in the seventh inning. He and Gurwitz were both walked in the eighth.

Clemens, who drove in the game-winning run with a five-pitch walk, is a 10-time starter who was pinch-hitting for the fourth time this year. Gurwitz’s previous 34 at-bats had been logged as a starter.

“I think that’s the reason why we won,” Pierce said. “Guys pulling for each other, and then when they get the opportunity, step up and do their job.”

Texas gave the baseball to junior Kyle Johnston after it built its one-run lead. Johnston was used primarily out of the bullpen as a freshmen, but he had made three starts this year and 21 in his career. In his first relief appearance of the season, Johnson struck out the three Bruins he faced.

The possibility of Johnston relieving against UCLA had been discussed during the week. Pierce has noted at times this year that a few of his pitchers could be used in multiple roles, and he restated that stance after Friday’s win. For his part, Johnston said he didn’t care if he started or closed games.

“I just want to win baseball games,” said Johnston, who tried to treat the appearance like the first or second inning of a routine start.

Rounding the bases: Mathis’ third-inning home run was his second homer in as many games. Mathis was hitting .162 before Wednesday’s game against A&M Corpus-Christi, but he has reached base in six of his last seven plate appearances… Texas senior Kacy Clemens hit his team-leading fourth home run in the sixth inning… Junior Morgan Cooper (1-0; 1.89 ERA) will start for Texas against UCLA on Saturday. UCLA has not yet named its starter.

Tracking the Elite 11: We know where Sam Ehlinger is, but what about the others?