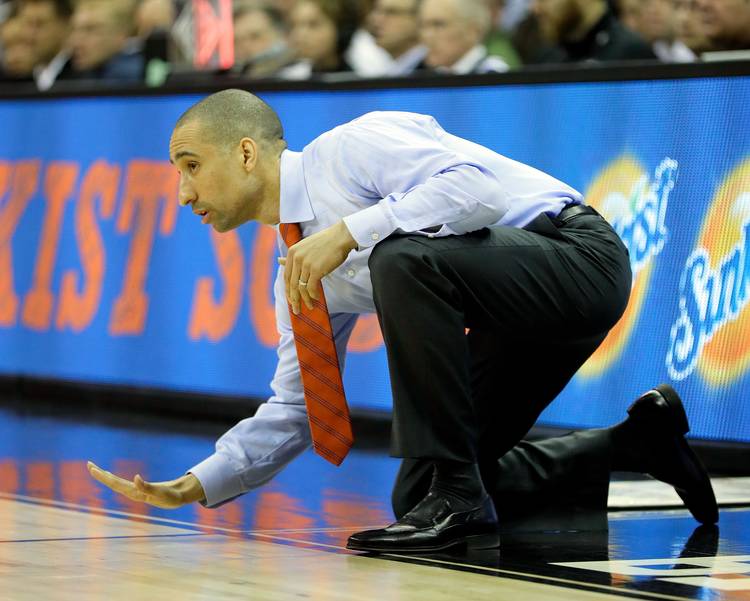 In just his second season, Shaka Smart has violated the one core tenet of being a head coach at the University of Texas.

Longhorns fans can accept losing. Heck, men’s basketball even gets somewhat of a pass because it isn’t the No. 1 sport around here. But fans will not tolerate being embarrassed.

Former football coach Charlie Strong learned that lesson the hard way. His first losing season in 2014 changed the dynamics for 2015. Two more losing seasons followed, and he was shown the door.

Some Texas fans are openly wondering if Smart is nothing more than Charlie Strong 2.0.

All questions are fair game after the Longhorns turned in an 11-22 record, which equaled the most losses in school history. From a win-loss perspective, this was the worst season in more than three decades. It all ended Thursday night with a Big 12 tournament quarterfinals loss to West Virginia.

“It’s a lot to learn from this season,” sophomore guard Kerwin Roach Jr. said. “We had a lot of things exposed this year. We just have to learn and grow from it.”

Asked how things went wrong, fellow sophomore Eric Davis Jr. said, “I really don’t have an answer for it.

“We had high hopes, and it’s OK to have high hopes,” Davis added. “You’ve just got to put the work in. It’s definitely a learning experience for me. Kerwin and I, we talk a lot. We’ve got to get back to the drawing board, man. And just work even harder.”

Smart took full accountability for the team’s failures during the closing week of the regular season. But he never went on a rip-snorting tear publicly, laying waste to all those under his command. That’s what his predecessor Rick Barnes did, probably a few too many times. That’s simply not Smart’s style, those who know him best say.

“As you mentioned, the season didn’t go anywhere near as well as we wanted to go,” he added. “Our job is to learn from that to help our team grow so we can be significantly better next time.”

Smart still has six years remaining on his guaranteed contract worth $3 million annually. Athletic director Mike Perrin, who was practically invisible at the Big 12 tournament, supports Smart. Anyone demanding a coaching change now would be summarily dismissed by UT brass.

But complaints cannot go ignored at this point. Not after UT made the NCAA Tournament 16 times in 17 seasons under Barnes. Not after Smart reached the NCAAs last season on the strength of Barnes’ recruits.

Not after this year’s team, picked to finish third in the Big 12 race, finished dead last. Not after the Longhorns went 1-14 in road and neutral-site games. Not after losing 22 games, tying the record for the most in school history set by the 1982-83 team.

This week is spring break on the UT campus. The Horns will get the week off and then return for workouts as the offseason begins. A $240,000 renovation project will begin where both practice courts are to be ripped out and replaced inside Cooley Pavilion. “We’ll be in a gym somewhere,” Smart said.

Here’s a look at five key questions facing the Horns before next season:

Smart said from the outset this season would be a “point guard-by-committee” approach. He thought that some patchwork combination of Davis, Roach and freshman Andrew Jones would be serviceable. All it did was expose how none of them are true point guards, merely shooting guards playing the point.

Smart can be criticized for not scouring the transfer market once it became obvious Isaiah Taylor would jump into the NBA draft after the 2015-16 season. The coach didn’t want to do anything to derail the recruitment of Oak Hill Academy guard Matt Coleman, ranked the 10th-best point guard in the nation by 247Sports.

Coleman, a player Smart has coveted for years, is committed for next season. He’s an instant starter, a move that can ease the burden on everyone else. But this is a double-edged sword for Smart, too. Has Coleman been built up to be a magic cure-all?

“You know, one player is just not going to fix a whole team,” freshman Jarrett Allen said Thursday. “Nothing against Matt. He’s going to be an amazing player, I believe. But for us to be a better team, everybody has to come together.”

Speaking of Allen, his decision is now the most watched aspect of Texas basketball. The 6-11 big man was noncommittal about his future in the locker room after the Big 12 tournament. Allen (13.4 points, 8.4 rebounds) stuck to the well-worn lines that all potential NBA prospects use.

“We went through a bad season,” Allen said, “but I’m not going to let that impact my decision.”

Let’s assume for the moment that Allen leaves. UT coaches are anxious to unleash 6-9 forward Dylan Osetkowski, who had to sit out this season per NCAA transfer rules. Inside the program, it’s believed that he’ll be the surprise player for next year.

But senior Shaq Cleare is now gone, and if Allen leaves as well, the Longhorns will be thin up front.

When the season began, it was hoped that Roach, Davis and Tevin Mack — the team’s three sophomores — would all take big steps forward and take control of the team.

Davis went into an early-season funk, one that left Smart mystified. Roach struggled under the pressure of handling the ball so much. And Mack got suspended for the season opener, proved himself volatile in the locker room and eventually was dismissed from the program in January.

“It’s nothing mechanical. It’s just me,” Davis said of his shot. “I’m not going to blame it on anyone else or any one player. It was just me. Look in the mirror and ask myself, ‘What can I do to get better?’”

Roach and Davis can still be effective. Look at how Roach surged at the Big 12 tournament as a prime example. Both players are still critical to Texas’ future. Both need to have a big offseason.

“I believe so. I think he definitely is,” Smart said. The coach noted how the freshman got down on himself when Young could make only 23 percent of his 3-pointers. It was also an adjustment coming to college, where Young was the do-it-all star in high school. “There is no doubt in my mind he can be a great player at Texas.”

After Young hit two 3-pointers against Texas Tech, he said, “Everything will start falling for itself after all the hard work we put in, I put in individually, all the teamwork. It’s going to all kick in.”

Freshman center James Banks was considered a project when he was signed. But it may take a little longer than expected.

More help is on the way. Texas has signed Jase Febres (6-foot-5), Royce Hamm Jr. (6-foot-7) and Jericho Sims (6-foot-9). Once those three and Coleman arrive, this will be a team made up predominately of Smart’s recruits.

The Longhorns are scheduled to take a summer trip to Australia, something the NCAA allows once every four years. That will give coaches and players time to bond far from home while playing local teams. It’s a far different setup than the botched 2015-16 season-opening trip to China.

There’s no magic formula what has to happen. This team needs to find some confidence and, as Smart says, a sense of purpose. New football coach Tom Herman believes his players were “embarrassed” by three straight losing seasons. Smart should hope his players feel the same way.

“We just need put our head down and work in the offseason,” Roach said. “It’ll show next season.”

Tracking the Elite 11: We know where Sam Ehlinger is, but what about the others?