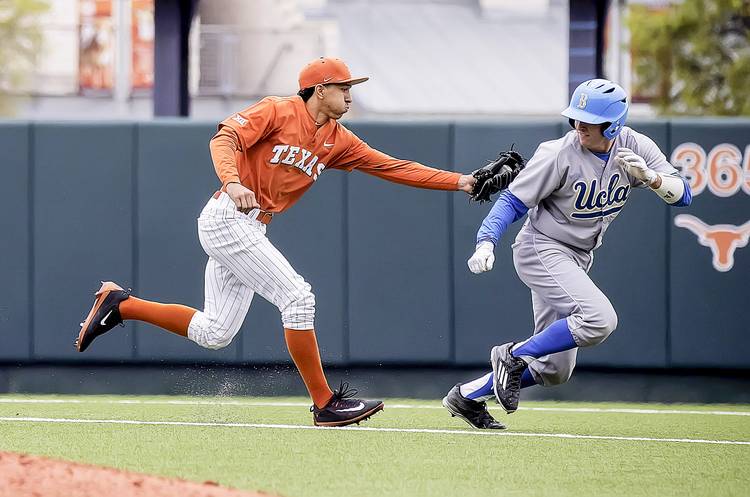 UT second baseman Bret Bosewell tags out UCLA's Nick Valaika in a hot box during a baseball game between the Longhorns and the Bruins at UFCU Disch-Falk Field on Sunday March 12, 2017. JOHN GUTIERREZ / FOR AMERICAN-STATESMAN

Fans had to wait a little over four hours, but the Longhorns defeated visiting UCLA 10-5 Sunday afternoon to complete the sweep of the Bruins and extend their winning streak to five games.

It was probably fitting that former coach Augie Garrido was in town. His teams were accustomed to playing in long games. But this time, Garrido watched his former team score five-plus runs for the fifth straight game.

This was a complete offensive domination by Texas (12-6) with every starter contributing in the Horns’ 14 hits and 10runs. Kacy Clemens and Michael McCann each had three.

The sweep, Pierce and Clemens admitted, wasn’t going to be easy. The Horns had won the first two games, including a series-clinching 5-2 victory on a rainy Saturday night.

“We’ve been telling (the media) we have talent and we could get it done,” Clemens said. “We finally showed y’all.”

But unlike Saturday, Texas didn’t hold onto its early lead.

UCLA tied the game in the second inning, but the Longhorns retook a one-run lead in the bottom half of the inning.

The Bruins regained the lead the fourth inning when Daniel Amaral doubled down the right field line to score Chase Strumpf and Wil McInerny hit a sac fly to plated Jack Stronach.

The Horns scored two runs in the bottom of the fourth and added four more in the sixth to take a 9-4 lead. UCLA cut into the lead in the top of the seventh inning, but that was the last of the Bruins scoring.

Texas added its 10th run of the game in the bottom of the eighth, which is the second time in the past week the Longhorns have scored 10-or-more runs.

“We’re trying to work on hitting pitchers’ mistakes,” Clemens said. “You have to take advantage of their mistakes because that’s how you score runs. We had like 25 quality at-bats, that’s how you get 10 runs.”

The Horns’ offense was brilliant on a day when the pitching and fielding, which is usually superb, struggled.

Starting pitcher Blair Henley allowed six hits, walked four batters and gave up two earned runs. Texas also committed two errors in the game, which bothered Pierce on a day they scored twice as many runs as the Bruins.

“We can get better,” Pierce said. “We kicked the ball around a little bit.”

The Horns face rival No. 17 Texas A&M Tuesday in Austin. In the two teams’ last meeting, the Aggies beat Texas on a walk-off home run in the bottom of the ninth inning in College Station last year.

So this is a big game?

He knows it’s not.