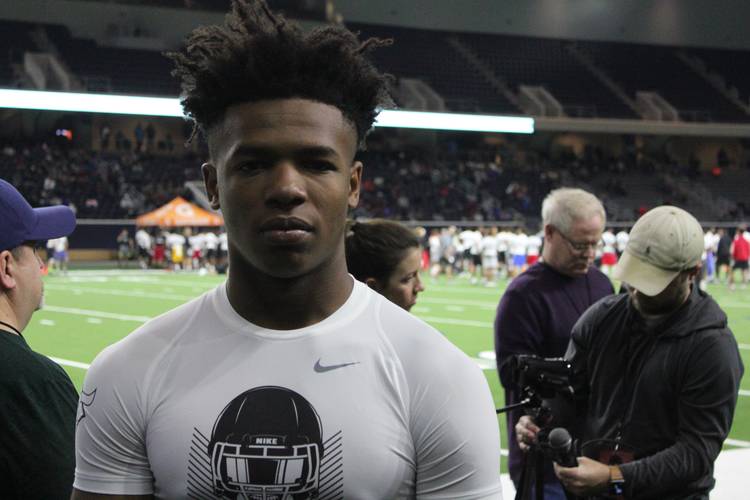 Cook update: Cook is becoming the consensus No. 1 player in the state after his junior season, and he’s clearly Texas’ top target in the 2018 class. Cook mentioned at The Opening in Houston Feb. 4 that Texas would always be among his group of favorites. He’s a dynamic cornerback prospect with the ideal frame and athleticism to be a lockdown cornerback at the college level. Cook earned an invite to The Opening Final in Oregon over the summer and is one of two five-star players in Texas this cycle. Texas wants at least two cornerbacks in this class and it might not need to leave Cook’s high school to find the second cornerback. D’Shawn Jamison, a teammate of Cook’s at Houston Lamar, is a four-star cornerback with a Texas offer. Al’Vonte Woodard, a four-star wide receiver who also holds a Texas offer, plays at Houston Lamar. Locking up that trio would be an achievement for Herman and his staff. Cook likely waits to commit until the end of the cycle. Texas is in good position going into the spring evaluation period. LSU appears to be the main competition.

Foster update: Foster is Texas’ to lose at this stage in the recruiting process. The five-star from Angleton is a two-way star at the prep level and isn’t shy when speaking about his affection for the Longhorns and the staff under head coach Tom Herman. Defensive coordinator Todd Orlando and assistant coach Craig Naivar are leading Foster’s recruitment. He has yet to compete in camps this winter because of an MCL injury he suffered during his junior season. If not for that injury, Foster might be ranked as the No. 1 player in the state. Foster can play both safety positions. He has the speed to cover wide receivers and the size to help against the run. Historically, Texas’ top defenses were spearheaded by elite safeties with coverage ability, and Foster would be the next in that line.

Ghirmai update: No prep player’s stock is rising faster than Ghirmai. He is only a three-star recruit and didn’t make the Fabulous 55, but he holds offers from programs like Alabama, Florida, UCLA, Oklahoma and LSU. We all make mistakes. Ghirmai will be a no-questions-asked four-star prospect soon and will become a Fab 55 member in the next update. Ghirmai attended Texas’ junior day a weekend before an impressive performance at The Opening in Dallas. He’s one of the few true offensive tackles Texas has offered thus far in 2018 and the only one from Texas. The Longhorns are the leaders right now, but the amount of offers coming Ghirmai’s way likely means the offensive tackle takes his time in the recruiting process and doesn’t pick a school until at least his senior season approaches. Texas’ other in-state offers along the offensive line – Trey Stratford and Chasen Hines – project as interior linemen at the college level.

Ingram update: Ingram has emerged as the top running back target in the 2018 class, and he’s high on the Longhorns. At The Opening in Dallas, Ingram admitted he was close to committing to the Longhorns during a junior day visit, but decided to enjoy the recruiting process and learn more about each program that offered him before deciding. Ingram is a versatile workhorse. He can run between the tackles, get the edge and catch out of the backfield. He helped lead Carthage to a Class 4A Division I state championship as a junior and could approach 6,000 total yards of offense in his high school career if he can duplicate his 2016 success. It’d be an upset if Ingram wasn’t a Texas commit by the end of the summer.

Coburn update: Texas’ ties to Westfield are known, and that makes Coburn an important piece in the 2018 class. Coburn is the best defensive tackle in the state and plays at the high school Corby Meekins once led. His brother is now Coburn’s high school head coach. Coburn was brutally honest about what Texas and Herman must do to earn his signature – win. At Texas’ junior day, Coburn indicated he knows everything there is to know about the staff, except if it can win at Texas like it did at Houston. Coburn hinted that if Texas can duplicate the success Houston had in the previous two seasons, Austin is a likely destination for the four-star athlete.