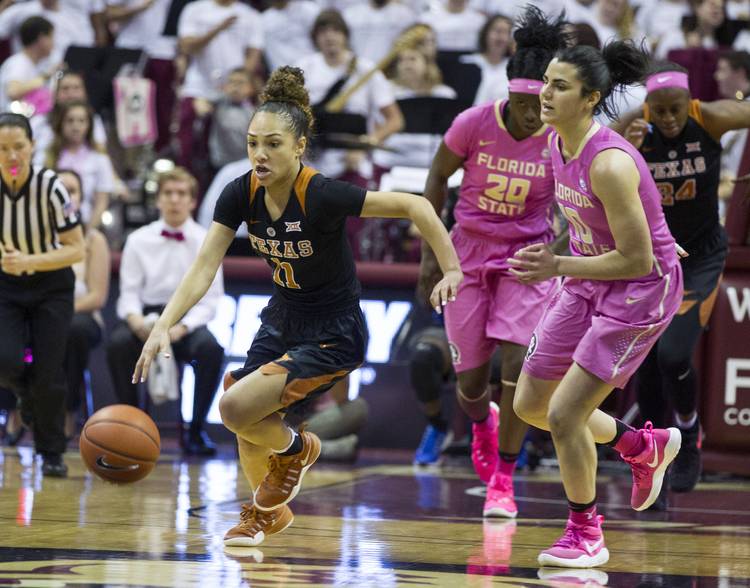 After playing basketball non-stop for four months, the Texas women’s team is enjoying a break as it heads into the most important part of the season — the NCAA Tournament.

The Longhorns (23-8) will be at home for the first and second rounds of the tournament. Seeded third, they will play Central Arkansas in their opener Friday at the Erwin Center. On Monday night, about 300 fans joined Longhorns players and coaches at the arena for a watch party as the tournament bracket was unveiled on ESPN.

Tipoff for the Longhorns’ game against Central Arkansas will be at 1:30 p.m., and that contest will follow a first-round contest between Auburn and North Carolina State game. The winners of those games will play Sunday.

Texas has been placed in the Lexington (Ky.) regional. Notre Dame is the top seed in that region followed by No. 2 Stanford.

“This is something we’ve planned all year long,” Longhorns coach Karen Aston told the crowd after the selection show.

On Friday, Texas will play its first game since falling to West Virginia in the Big 12 semifinals on March 5 in Oklahoma City.

The break has given the Longhorns a chance to “regroup and refocus,” said senior guard Brianna Taylor.

Taylor compared the team’s current break to the Christmas holidays. Energized when they returned in late December, the Longhorns were in a mindset that led to a winning streak that stretched to 19 games.

“This team has needed the break, especially mentally,” said junior guard Ariel Atkins. “When you reach this time of year, the season takes a toll.”

Aston gave the Longhorns four day off after the Big 12 Tournament to rest their legs and begin to concentrate on the task ahead. She said it was particularly helpful for freshmen Joyner Holmes and Sug Sutton, who were not accustomed to playing in March while in high school.

On a negative note, UT officials said Monday that Longhorn Khaleann Caron-Goudreau, a 6-foot-4 redshirt sophomore, has sprained her right foot and will miss the tournament.

Defending national champion Connecticut is the tournament’s No. 1 overall seed and will open at home in Storrs, Conn. The Huskies have been placed in the Bridgeport (Conn.) regional, meaning they would not have to leave the state before playing in the Final Four, which will be March 31 to April 2 at America Airlines Center in Dallas.

First- and second-round games in the NCAA women’s tournament will be played from Friday through Monday. The regionals in Lexington, Ky., and Oklahoma City will be March 24-26, and those in Bridgeport and Stockton, Calif., are scheduled for March 25-27.

The UConn regional will include a pair of Big 12 teams in its bracket. Iowa State will play Syracuse and West Virginia will play Elon, which is making its first NCAA Tournament appearance.

Another Big 12 squad, Baylor, is the No. 1 seed in the Oklahoma City regional. Big 12 teams Oklahoma and Kansas State also earned spots in the tournament field.