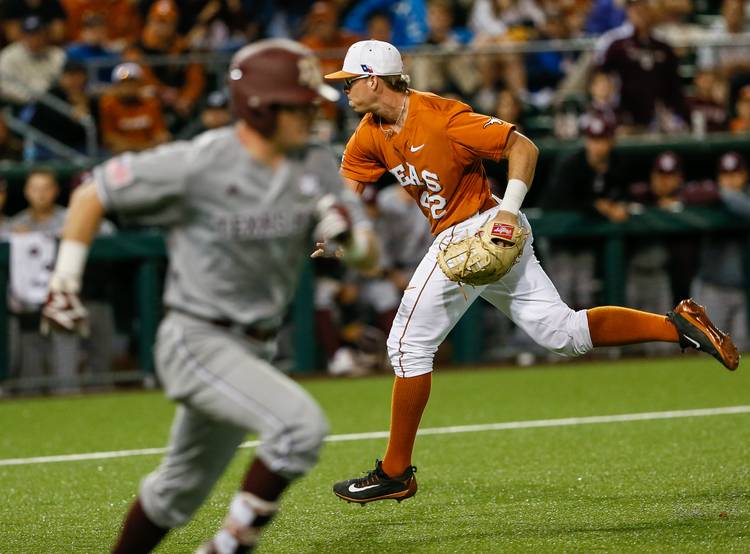 First baseman Kacy Clemens (#42) fields a bunt and makes put-out at home plate in a game of the Texas A&M University versus the University of Texas at UFCU Disch-Falk Field in Austin, Texas on March 14, 2017 (Andy Nietupski for AMERICAN STATESMAN)

Separated by a conference — but less than 110 miles — Texas and Texas A&M can apparently still be considered rivals.

After cashing in on a slew of miscues, Texas held on for a 4-3 victory over Texas A&M on Tuesday. The one-run decision in front of an announced crowd of 6,985 at UFCU Disch-Falk Field came a year after Texas A&M beat Texas in College Station on a walk-off home run.

A former cohabitant in the Big 12, Texas A&M was playing in Austin for the first time since 2012.

“It’s always been a legendary rivalry,” said catcher Michael McCann, whose team is now 243-125-5 all-time against Texas A&M. “We sort of have hard feelings for each other, but we each come out and compete. I think it was a clean game today, but it was fun to give them a beating.”

Trailing 4-1 in the eighth inning, Texas A&M loaded the bases with no outs before scoring on a walk and a fielder’s choice. Beau Ridgeway eventually got out of the jam with a pop-up, but the Longhorns’ key out was its second one.

With Joel Davis on third base, Texas A&M attempted to bunt in the tying run. Texas first baseman Kacy Clemens, however, made a play on the baseball. Clemens fed catcher Michael Cantu for the out, which prompted an emotional exchange between Clemens and the Aggie dugout.

Clemens said he got the call from his dugout to look for the squeeze play, but the signal came in late.

“Right when the pitcher kicked up, I looked home and he squared to bunt,” Clemens said. “I was just hauling to get the ball and luckily made a good play on it and Michael was there to catch a good toss. That was obviously a big out.”

Beau Ridgeway, who inherited a bases-loaded jam and a 4-2 score in the eighth inning, started the final frame but was pulled with one out and a runner on second. Chase Shugart then forced two groundouts to shortstop David Hamilton to secure the win. The game-ending out was recorded against Braden Shewmake, who had walked and collected three of the Aggies’ four hits on Tuesday.

“We just hung on after we got four. We just hung onto it and played solid defense,” said Texas coach David Pierce, who credited the defensive plays made by Hamilton and Clemens. “It was good to see Chase Shugart get those last two because his confidence has been a little bit suspect lately.”

Texas collected its four runs and four of its seven hits in the fourth and fifth innings on Tuesday. The Longhorns were aided by four Aggie errors and a balk during those two innings, but Clemens and McCann did contribute run-scoring singles.

Texas is only six games removed from a 2-1 loss at Stanford in which its batting average dropped to .203. The Longhorns have since won six straight games and raised that average to .245. Texas has scored 48 times over its last six games.

“Everybody’s kind looking at that Stanford series, saying, man, we can’t hit, blah blah blah,” Clemens said. “This is more of what you’re going to see in my opinion. We have a lot of potential.”

Fresh off its victory over the 17th-ranked team in D1Baseball.com’s national poll, Texas will open a three-game series with No. 6 Texas Tech on Friday. Both Texas and Texas Tech will be playing in their first Big 12 games of 2017.

Rounding the bases: Former Texas quarterback Colt McCoy threw out the first pitch on Tuesday. Quan Cosby, who caught one of the seven touchdown passes that McCoy threw against Texas A&M from 2006-09, was the catcher for the ceremonial pitch… Outfielders Zane Gurwitz and Patrick Mathis were both removed from the game with injuries. Pierce said Gurwitz was day-to-day due to a hamstring injury that has dogged him all season. Pierce did not have a timetable for Mathis, who ran into a wall in foul territory in the ninth inning… Texas improved to 13-6 with the win. Texas A&M slipped to 14-4 and had its five-game winning streak snapped.