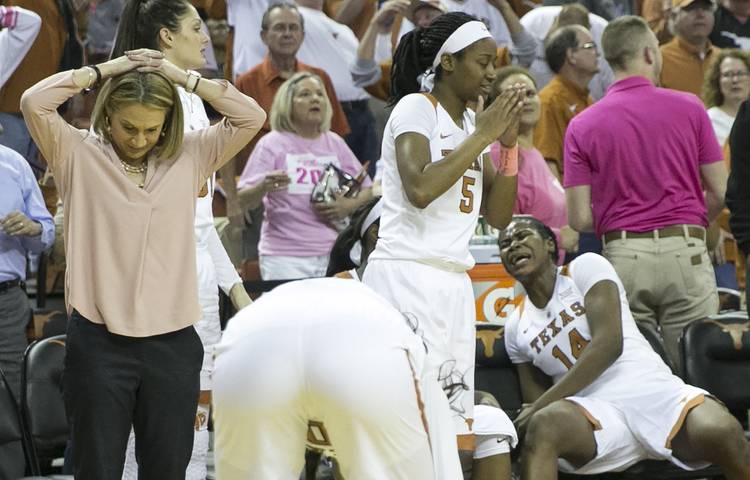 Karen Aston was on a recruiting trip in Virginia three years ago when she came across a young woman with passion in her eyes and a spring in her step.

Texas’ head coach told George Washington, her assistant coach, about the raw talent she saw whose hometown is Lagos, Nigeria. Olamide Aborowa, who had moved to Philadelphia when she was 15 to find a better education and athletic opportunities, was a “rebounding machine,” Aston told him.

By coincidence, Texas was searching for a replacement for departing senior Nneka Enemkpali, a four-year front-court dynamo in burnt orange and the daughter of two Nigerian-born parents.

“I like kids who have some pop in their step and the athletic ability to run, rebound and be very active, especially in the post area,” Aston said.

It has been quite a journey for Aborowa, who is still adjusting to life outside of Africa.

She had no intentions of leaving Lagos until an opportunity arose “by the grace of God,” the 6-3 Longhorns sophomore forward said on the eve of this year’s NCAA women’s tournament, which begins Friday.

Aborowa is fluent in English and Yoruba — a language spoken in West Africa, mainly in Nigeria. She lived with a guardian because her father was “never in the picture,” and her mother, Olaitan Elizabeth, was rarely home while making ends meet with two jobs.

A basketball coach named Joel Ige introduced Aborowa to the sport of basketball. She played on a court with potholes while wearing hand-me-down gym clothes and white Converse basketball shoes. She enjoyed the game but was so busy helping her legal guardian at home, she had little time to practice.

Her big break came when Ige introduced her to Mobolaji Akiode, the founder of Hope 4 Girls Africa, a non-profit organization dedicated to the increased participation and empowerment of disadvantaged young African women in sports and education.

Akiode suggested Aborowa take advantage of a program that would relocate her to the United States. She promised her a better life abroad.

“Moving to the U.S. was not exactly in my game plan at the time,” Aborowa said.

Her only connection with America came from television. She recalls watching the comedy “Two and a Half Men.” Occasionally she tuned in to ESPN and CNN.

Akiode accompanied Aborowa and two other Lagos-area girls — Emmanuela Awobajo and Felicia Aiyeotanto — to New York City. They would soon meet their new guardian, Maureen Tobin, the general manager of Mac’s Tavern who lives in a row home in Philadelphia.

“When I first met Mide (Olamide’s nickname), she was very quiet and introverted, had trouble opening up to people,” Tobin said.

Aborowa, though, would soon excel academically and on the basketball court at Saints John Neumann and Maria Goretti Catholic High School, where she won a state championship on a team that went 29-1.

“On most nights I’d get up at 3 in the morning and run through the streets,” she said. “There was no one there, just me and the wind. It was cool outside, but I enjoyed that.”

The nation caught wind of Aborowa’s talent when she became a member of the Philadelphia Belles, a club team that travels to tournaments all over the country. South Carolina, Southern Cal, Ole Miss, Miami, Texas A&M and Texas were among the college programs that recruited her heavily.

Aston discovered her at a club tournament in Hampton, Va. She eventually made a recruiting visit to Aborowa’s home in Philadelphia.

“Karen is a very, very interesting woman,” Tobin said. “She speaks very softly but clearly, and there is a firm kindness about her. She talked about Mide becoming a part of the Texas family.”

Aborowa made a recruiting visit to Austin and then committed. She enjoyed the players and staff, but said the real drawing card was the climate, which reminded her of back home in Nigeria.

“Life is a learning experience and I don’t regret being here,” she said. “It’s been a blessing for me.”

Aborowa’s only gripe has been on the court. Although Aston claims she has “only scratched the surface of her ability,” she is not satisfied with her own progress. She feels “behind in practice” and has averaged five minutes in the 16 games she has played.

“I have gotten better from my freshman year to my sophomore year,” she said. “My expectations are very high. I’m not where I wished I’d be, though. But hey, I’m still working on it. My coaches tell me I’m getting better all the time.”

Aborowa has contact with her mother in Lagos almost daily, and also calls and texts Tobin in Philadelphia. She misses both of them.

“It’s already been quite a journey for Mide,” Tobin said. “The interesting thing is to see what she does after college.”

Aborowa is considering a major in international relations and global studies, and plans to graduate in 2019.

“What I’d like to do,” she said, “is move back to Nigeria and held other young people the way that others have helped me.”