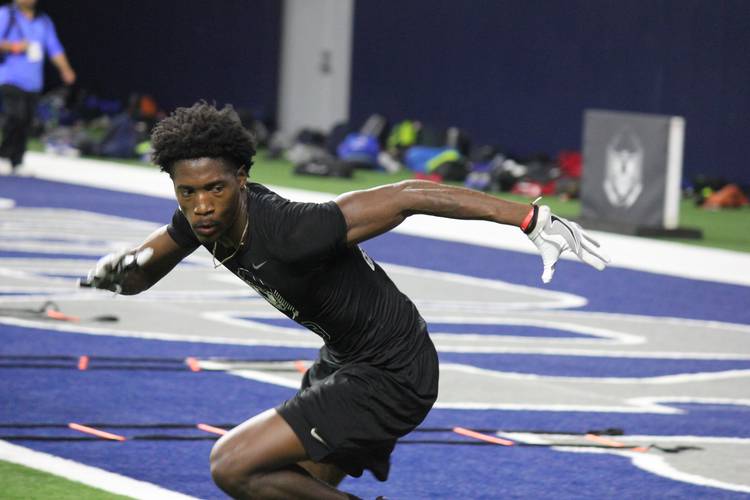 Desoto defensive back Gemon Green competes at The Opening in Dallas. (Mike Craven)

Recruiting rarely remains stagnant for long. The 2018 class is in full-swing and the Texas staff is beginning to identify more players at nearly every position as future Longhorns. Tom Herman’s staff has extended seven new offers over the past month. Here’s what Texas fans should know about each prospect now that they’re firmly on the radar.

The trend of Texas offering to out-of-state quarterbacks continued earlier this month when the Longhorns offered McKee, a four-star prospect from California. McKee, at 6-6, is a pro-style quarterback who’s familiar with the state of Texas; he has family in Houston and participated in The Opening regional in Houston on Feb. 4. He was the best quarterback there that day and he was invited to the Elite 11 Finals this summer. McKee is a big-bodied prospect with a strong arm, strong technique and consistency as a passer. He’s not a major threat to use his legs, which makes him different than most of the other quarterbacks that Herman’s staff has offered. Stanford and BYU are considered the favorites; McKee was the seventh out-of-state quarterback that the Longhorns have offered for this cycle.

Herman wants Texas to utilize tight ends. His staff made the position a priority in 2017, signing two top prospects. One of those, however — Tulsa, Okla.’s Reese Leitao — has an uncertain status with the Texas program after his arrest last month. The Longhorns are likely to sign at least one tight end regardless of what happens with Leitao, but questions about the UT signee forced the staff to identify another tight end prospect to potentially sign. Moore is the third in-state tight end to receive a Texas offer. He’s big with the potential to move to offensive tackle at the college level if he can add 30-40 pounds over the next few years.

The state isn’t ripe with tackle prospects for 2018. The Longhorns are pursuing Frisco Wakeland’s Rafiti Ghirmai, but the other top offensive line prospects in the state that have been offered by UT project to play an interior position like guard or center. That means Herman and his staff might need to go beyond the state’s borders to find a blue-chip tackle out there. Wray is a blue-chip prospect, but it will be tough for Texas to pluck him out of SEC country. Still, Texas will host Wray, as well as his younger brother, this weekend on an unofficial visit. The fact that Wray is coming to Austin after receiving a Texas offer at least gives the Longhorns a shot at becoming legitimate contenders to land Wray.

The defensive staff’s top priority for 2018 is to find edge defenders that can rush the passer. Few players in the state get after the quarterback with as much skill and aggression as Ossai. As a junior, he recorded 10 tackles for loss and 8.5 sacks to go along with 46 tackles, three forced fumbles, three recovered fumbles and a defensive touchdown. But landing him would be an upset. He indicated at Texas’ junior day that Texas A&M is his dream school, but that he’s keeping his options open and trying to keep an open mind during the recruiting process. Still, expect Ossai to eventually land in College Station.

Herman is showing no fear about leaving the state to find prospects he feels fit best his new program. Tatum, one of the top five players in Oklahoma, received a UT offer in January and the Longhorns are quickly making him a priority. He attended Texas’ junior day and praised defensive line coach Oscar Giles a week later at The Opening regional in Dallas. Tatum is a big-bodied end who can play the five-technique in a 3-4 scheme or a traditional strong-side end position in a 4-3. He’s already close to 270 pounds, suggesting a future as a defensive tackle isn’t out of the question.

Linebacker is another position proving tough to recruit from within the state, but Hobbs has emerged as a top target for several schools because of his versatility as a defender. He has the length and strength to play defensive end at the prep level, but projects as an outside linebacker in college unless he packs on weight. Hobbs, who doesn’t play at one of DFW’s power schools, slipped through the cracks early in the recruiting process. He recorded 86 tackles and nine sacks as a junior, adding four forced fumbles and an interception. He’s one of just two true outside linebackers that Texas has offered and he looked the part at The Opening regional in Dallas.

Green is an interesting prospect. He’s clearly athletic, as he showed at The Opening in Dallas. He has the frame to play cornerback or safety at the college level and has plenty of big-game experience at DeSoto. The Eagles are routinely one of the more talented programs in the state, but could never win a state championship until 2016 when DeSoto beat Cibolo Steele for the Class 6A Division II title. Green, and his twin brother German, were large pieces to the championship puzzle. It’s unclear whether German will eventually land an offer from Texas. It would help Texas’ chances of landing Gemon if German was offered. TCU is the current leader to land the Green twins.