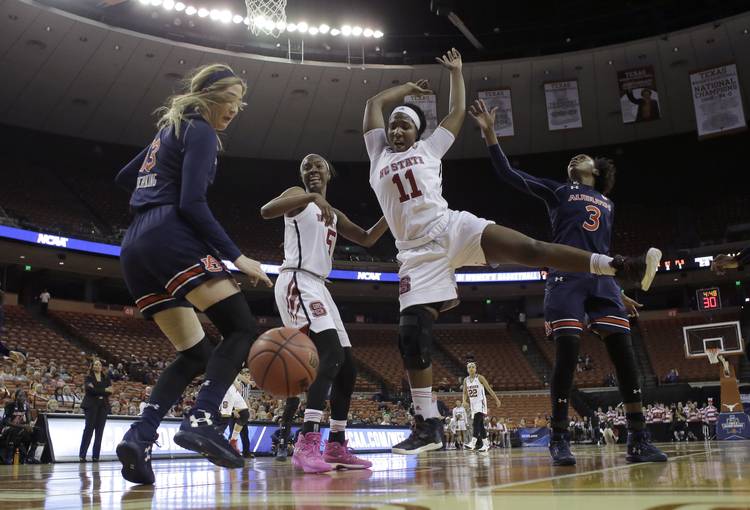 That’s what the Tigers shot on Friday in the first-round of the NCAA women’s tournament. They took 59 shots. They made only 14 of them. And they lost to sixth-seeded North Carolina State at the Erwin Center, 62-48.

The Wolfpack, who’ll face third-seeded Texas on Sunday, got 23 points from Dominique Wheeler in her NCAA tournament debut.

Wilson, an all-ACC selection this year, averages 13.2 points per game.

“The scouting report said she’s a scorer, that anytime she gets the ball, she’s a threat to score,” Auburn coach Terri Williams-Flournoy said. “We saw that today.”

Everybody also saw the Wolfpack play some defense. They placed Auburn’s offense into a steel cage, then locked it and threw the key away. The Tigers shot only 11 percent from three-point range and turned it over 10 times. In the second quarter, Auburn managed only four points and shot 1-of-12 from the field. The Wolfpack led by 17 points at halftime.

“Well, we just did a really good job with the scout, with the personnel, knowing who did what, knowing strengths and how we were playing individual players,” said Wolfpack coach Wes Moore, who was this year’s ACC coach of the year.

North Carolina State (23-8) contested some of those Auburn shots, making sure Tigers shooters didn’t get a clean look at the basket. But the Tigers didn’t help themselves, missing shots from the paint and clanging the open shots they did get.

And while Auburn’s offense didn’t perform at full strength, neither did its defense. The Tigers, with their full-court press style, ranked second in the country in turnovers forced, averaging more than 22 a game. Auburn did force 20 turnovers, but nine of them came in the fourth quarter. By that point, the game was pretty much decided.