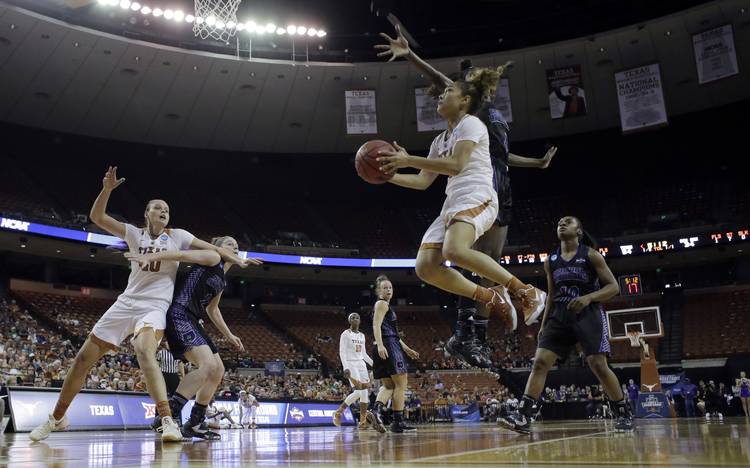 A game filled with turnovers, missed defensive assignments and lack of offensive rhythm rings hollow when one considers the bottom line.

As expected, the third-seeded Longhorns cruised to an easy victory in the first round the NCAA women’s basketball tournament on Friday. They flexed their muscles with a 55-23 rebounding edge, a 30-14 edge in bench points and were never challenged after leading 24-4 after the first quarter.

Texas, which improved to 24-8, will face North Carolina State in the second round of the Lexington Regional on Sunday at the Erwin Center. The Wolfpack (23-8), who are a No. 6 seed, dispatched Auburn earlier Friday. Sunday’s game will start at either 11 a.m. or 1:30 p.m.

Texas played like a team coming off a 12-day layoff. Longhorns coach Karen Aston, substituting freely, saw all 11 of her players score at least four points. Texas had a hot hand, hitting 51.7 percent of its shots to improve its record to 24-8.

“It’s that time of year where you just survive, advance, move on and get ready for the next one,” Aston said.

Brooke McCarty, the Big 12’s player of the year, led Texas with 15 points, including 3 of 4 shots behind the three-point line. Freshman Joyner Holmes, who looked sluggish in the Big 12 tournament two weeks ago, had a game-high nine rebounds to complement her 12 points.

It was hardly a perfect game for Texas, which coughed up 21 turnovers that led to 18 points for the Sugar Bears (26-5). And after taking a 48-20 lead at halftime, the Longhorns were outscored 23-14 in a ragged third quarter.

That was a hot topic after the game.

“We started doing things that were uncharacteristic for us, and (the Sugar Bears) took advantage of our turnovers,” McCarty said.

Did Texas play at a championship level?

“Not for 40 minutes,” said guard Ariel Atkins, limited to six points and five rebounds after being saddled with four fouls.

That trio helped the Longhorns shoot 61.3 percent from the field in the first half, UT’s best half of the season.

“We knew we had a size advantage and we just stuck with our game plan,” McCarty said. UT had a 13-4 edge in assists, most of them setting up Lang and Holmes inside.

The Sugar Bears, at times, gave the Longhorns trouble, outscoring Texas 23-14 in the third quarter. But across the hall, Central Arkansas players and coach Sandra Rushing were in no mood to speak about a moral victory.

Guard Maggie Proffitt, who scored a team-high 17 points, said her team’s lack of height was critical.

“We were sending five players to the boards and (the Longhorns) were still able to jump over the top and get the rebound,” Proffitt said.

Central Arkansas also was hurt by the absence of senior point guard Brianna Mullins, who played just 23 minutes after being whistled for three fouls in the first quarter. She finished with five points and one assist.

Looking ahead, the Longhorns will play an unfamiliar opponent on Sunday. They hold a 5-1 series edge but have not played the Wolfpack since winning a 69-56 decision in 2003.

“Our players know they have to put together 40 good minutes to beat N.C. State,” Aston said. “They understand they need to play better than we did today.”