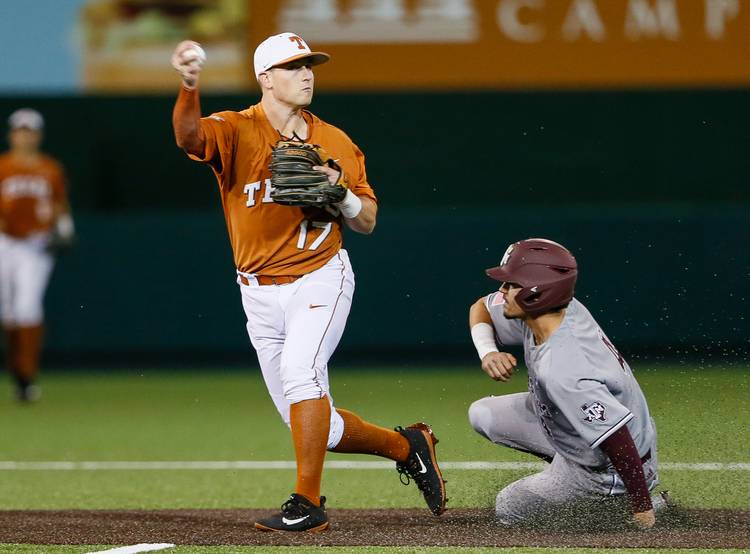 Bret Boswell makes the forced out a game of the Texas A&M University versus the University of Texas at UFCU Disch-Falk Field in Austin, Texas on March 14, 2017 (Andy Nietupski for AMERICAN STATESMAN)

After making some noise over the course of a six-game winning streak, Texas was silenced on Friday night.

Texas produced a season-low two hits in a 2-1 loss to Texas Tech at UFCU Disch-Falk Field. The loss snapped the school’s longest winning streak since 2015. It also dropped the Longhorns to 13-7 on the season and 0-1 in Big 12 play.

Texas Tech, which won the conference’s regular-season crown in 2016, will play two more games in Austin this weekend.

“We want to play the best we can,” Texas second baseman Bret Boswell said. “Hopefully we can take the next two and move onto the next week. We definitely want to come back tomorrow and be ready to play.”

Friday’s series opener turned into a duel between starting pitchers Nolan Kingham and Davis Martin. Both pitchers surrendered a home run to the ninth hitter in the opposing line-up — Michael Davis for Texas Tech and Tate Shaw for Texas — but a 1-1 tie existed at the end of the sixth inning.

Texas Tech first baseman Hunter Hargrove was hit by a Kingham pitch to lead off the seventh. Hargrove took off running during the next at-bat, and he scored easily as Michael Berglund doubled on the hit-and-run attempt. Kingham finished off the inning, and he exited the game having allowed seven hits.

Martin, meanwhile, limited Texas to those two hits over his 6 1/3 innings, and neither Parker Mushinski nor John McMillon surrendered a hit in relief. Texas did, though, draw six walks on Friday. Texas got either a leadoff or one-out runner on base in each of the final five innings, but the Longhorns could not manufacture that second run.

In the final two innings, the Longhorns stranded Shaw and pinch-runner Tyler Rand on third base.

“They had good stuff on the mound,” Texas coach David Pierce said. “I thought we competed well, we just didn’t get it done.”

Texas Tech collected seven hits, but Kingham and reliever Beau Ridgeway were backed by three double plays. Boswell and shortstop David Hamilton were involved in all of those double plays, and the middle infielders provided 15 of the defense’s 16 assists. Texas also worked around an error by Hamilton, who has three defensive miscues and 76 assists this season.

The shortstop on the Big 12’s 2016 all-tournament team, Boswell had nine assists on Friday.

“David has the range, Boswell has the experience,” Pierce said. “(Boswell is) much more comfortable on the right side of the infield, and he can concentrate on his offense a little bit better without the pressure of playing on the left side. I’ve been very pleased with their middle play and how they’ve communicated with each other.”

Rounding the bases:  After being removed from Tuesday’s win over Texas A&M, Texas outfielders Zane Gurwitz (hamstring) and Patrick Mathis (leg) both sat on Friday. Mathis is considered day-to-day, but Pierce said Gurwitz will be sidelined for at least three weeks… Texas Tech (15-4; 1-0) is ranked sixth in D1Baseball.com’s national poll… The third-inning homer was the first of Shaw’s career. A sophomore outfielder from Westlake, Shaw earned his first-ever start in last week’s rout of Texas A&M-Corpus Christi. He has since picked up three doubles and a home run in 13 at-bats.