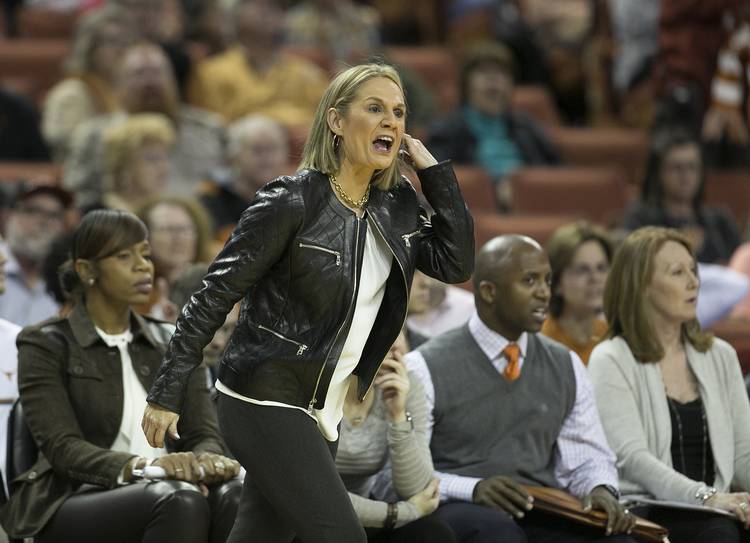 Texas head coach Karen Aston yells to her team as they play OU during the first half of their game at the Frank Erwin Center on Tuesday, January 17, 2017. DEBORAH CANNON / AMERICAN-STATESMAN

Even in a 28-point victory, Texas coach Karen Aston was concerned by her team’s turnovers during the Longhorns’ 78-50 win over Central Arkansas.

The Longhorns averaged 15.1 turnovers in this season, ranking 137th in the country. They had 21 on Friday.

“At this time of the year, there’s such a value that you have to have for the basketball and for possessions,” Aston said. “We went through a long period of time this year where I thought we’d really cleaned up the turnover issue, and then the last couple of games we’ve played, we’ve had some uncharacteristic turnovers.”

Said Texas guard Brianna Taylor, “I think we were just being antsy and impatient. We have to be more disciplined on offense.”

A good debut: North Carolina State guard Dominique Wilson shined in her first ever NCAA Tournament game. Wilson, who transferred from Arkansas in 2013, didn’t play the last time N.C. State went to the NCAAs in 2014.

She waited three years to play in the tournament. On Friday, it was Auburn that ended up bearing the brunt of that wait; Wilson scored 23 points and grabbed five rebounds in the Wolfpack’s 62-48 win.

Wilson said she wasn’t nervous or anxious. Just excited. She was also more focused, she said, because “this is your last game. Win or go home.”

She got off to a fast start, scoring seven points in both the first and second quarters. Auburn didn’t have an answer for her.

“The scouting report said she was a scorer,” Auburn head coach Terri Williams-Flournoy said. “On every catch she is a threat to score, and that we saw.”

Texas hits the glass: Central Arkansas couldn’t keep Texas of the boards. Not on the offensive end, anyway. The Longhorns had 55 rebounds, 20 of them on offense.

Those boards are what helped the Horns get 18 second-chance points. Taylor and Ariel Atkins each had two offensive rebounds.

“Our post players are so effective, so teams have to double- and triple-team them, leaving guards open to get offensive rebounds,” Taylor said.

This marked the 29th time in 32 games that Texas has outrebounded its opponent.

Etc.: Texas has reached 24 victories for the third straight season. … Texas, which collected 55 rebounds, is 8-0 when retrieving 50 boards. … McCarty has scored in double figures in 27 of 32 games. … Kelsey Lang needs three more blocked shots to surpass Tiffany Jackson (181) for sixth place in UT history. … Olamide Aborowa had a career-best six rebounds to go along with 4 points and two blocked shots.