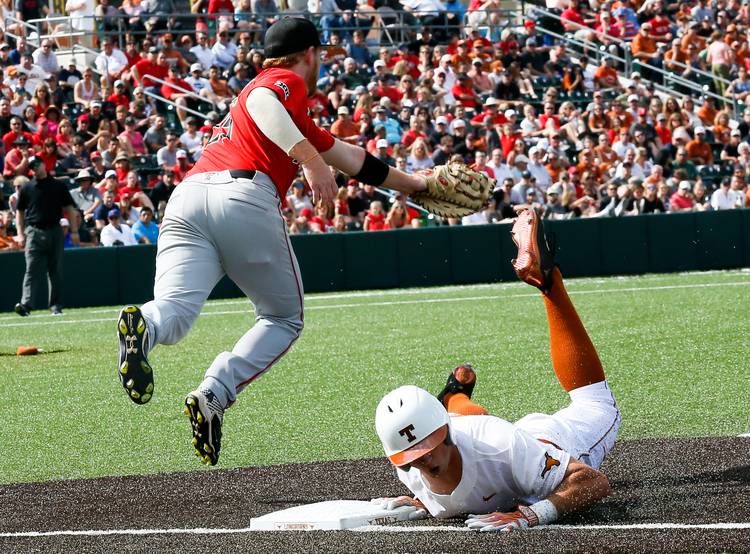 One and done. Again.

Held to four hits, Texas was unable to hold on to an early lead in a 2-1 loss to Texas Tech on Saturday afternoon. The defeat at UFCU Disch-Falk Field gave the Longhorns their second loss in as many Big 12 games, while the Red Raiders improved to 2-0 in conference play. A 2-1 loser against Texas Tech on Friday, Texas (13-8) dropped to 3-6 in one-run games.

The Red Raiders, who are ranked sixth in the D1Baseball.com poll, and the Longhorns are set to close out their three-game series at 1 p.m. Sunday.

Texas produced a season-low two hits Friday, and those offensive woes carried over to Saturday. UT got five runners on base over the first two innings, but the team’s only run scored on an error in the first. David Hamilton, whose sixth-inning single ended up being Texas’ final hit Friday, broke up Steven Gingery’s no-hit bid in the fifth inning with a two-out single to right field.

Texas entered this week’s series having scored 66 runs in its previous eight games in Austin. The Longhorns had at least nine hits in five of those contests, all of which were wins. Those numbers, however, certainly weren’t found on Saturday, and Gingery limited Texas to two hits over his six innings.

Then came the seventh-inning stumble. Thanks to a single and an error to start the inning, Texas had runners on second and third with no outs. Red Raider reliever Jacob Patterson, however, struck out Travis Jones, Hamilton and Kacy Clemens — the top three hitters in Texas’ lineup — to end the threat.

“We have to relax and trust ourselves. We’ve got to see the ball better,” Texas coach David Pierce said. “Second and third and nobody out, all we need is contact right there. Sometimes that’s easier said than done.”

Texas left two aboard in the eighth inning and was retired in order in the ninth.

Texas Tech (16-4) got its runs during the third inning on a walk and three singles. That was the roughest inning for Cooper, who allowed six hits during a start that lasted 6 2/3 innings. Cooper struck out nine and threw a career-high 120 pitches.

Rounding the bases: Junior Jake McKenzie went 0-for-3 with a walk as Texas’ designated hitter Saturday. McKenzie had appeared only as a relief pitcher this season, but he provided Texas with another right-handed bat against the left-handed Gingery. Used as an infielder and a pitcher during his collegiate career, McKenzie hit .237 over 97 at-bats in 2016. … Texas freshman Blair Henley (2-1, 3.00 ERA) and Texas Tech sophomore Ryan Shetter (2-0, 2.70) are expected to be the starting pitchers Sunday. …  After Texas and Texas Tech played in front of 6,396 fans on Friday, Disch-Falk Field had an announced crowd of 7,091 Saturday afternoon.