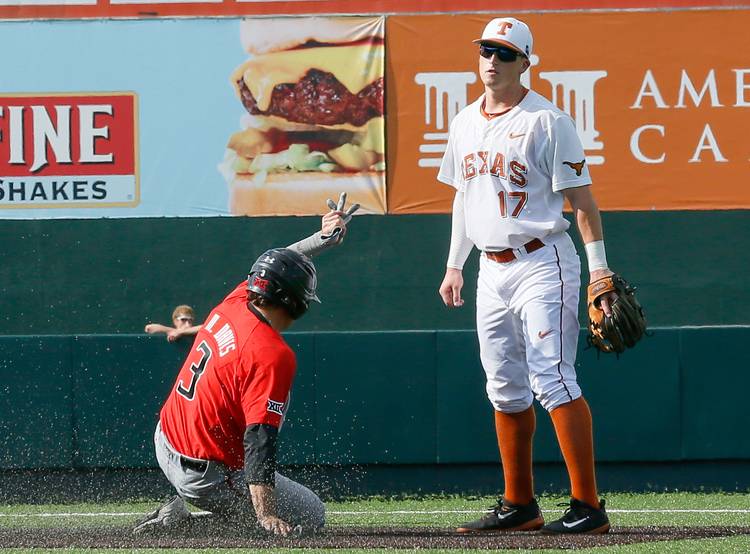 Michael Davis (#3) slides into second base on a hit-and-run as the Texas Tech University played the University of Texas at UFCU Disch-Falk Field in Austin, Texas on March 18, 2017 (Andy Nietupski for AMERICAN STATESMAN)

Texas didn’t fare so well this weekend in its first Big 12 baseball test.

The letter grade received by the Longhorns? L.

Behind 15 hits, Texas Tech dealt the Longhorns their third straight loss, an 8-5 defeat Sunday for the Red Raiders’ series sweep on the opening weekend of conference play. Texas entered the weekend with a six-game winning streak. Texas Tech, ranked No. 6 in the country by D1Baseball.com, improved to 17-4.

“Texas Tech is a lot better than us right now, and we’ve got to improve,” said Texas coach David Pierce, whose team is 13-9 and now 0-3 in Big 12 play. “The one thing I do think, we have is some resilience. There’s nobody in that clubhouse giving up;  it’s really early.”

Texas, which dropped a pair of 2-1 games to open the series on Friday and Saturday, came out swinging on Sunday. Kacy Clemens and Bret Boswell both produced run-scoring hits in the first inning, and David Hamilton plated a run on a second-inning fielder’s choice. Hamilton’s RBI boosted the Longhorns to a 3-1 lead.

Those three runs would have been a godsend on Friday and Saturday. Sunday, though, was a different story.

Pierce said Henley was “OK at times, he was really good at times.” The first-year coach added that UT needed to get right-hander Kyle Johnston, who gave up four hits over 2 1/3 innings, “straightened out.” Kevin Roliard, Beau Ridgeway, Jake McKenzie and Tyler Schimpf also threw on Sunday.

“Still trying to build some guys,” Pierce said. “We’ll continue to work at it.”

Even though Texas was more productive offensively, the Longhorns ended up with more runs and walks (seven) than hits (four). Texas hit .119 in the three-game series.

“Our hitters are putting pressure on ourselves,” Clemens said. “We’re all trying to be great and get the job done, and when it doesn’t happen it’s easy to press in this game. When you try in this game, it doesn’t work. You can’t try, you’ve just go to get everything out of your head and go to the plate with a clear mind.”

On Tuesday, Texas travels to Texas State; the Bobcats won their weekend home series with defending NCAA champion Coastal Carolina. It will be Texas’ sixth road game of 2017. The Longhorns then return to Austin for four games in five days with UT-Rio Grande Valley and Kansas State.

Rounding the bases: Both dugouts partially emptied after UT designated hitter Kody Clemens was hit by a sixth-inning pitch. Clemens exchanged words with Texas Tech catcher Michael Berglund, but the situation was de-escalated. The Longhorns and Red Raiders exchanged postgame handshakes without any incidents. … Boswell doubled twice and he now leads the Longhorns with seven two-bag hits. … Pierce said Hamilton is an “absolute stud right now.” The freshman shortstop from San Marcos was involved in five of Texas’ six double plays this weekend.