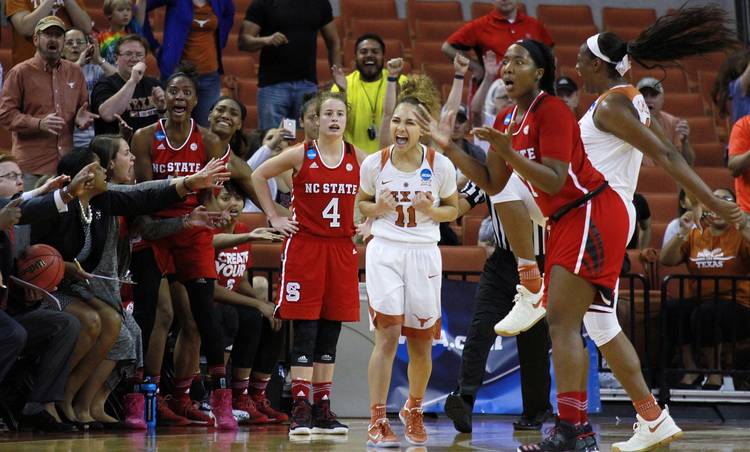 Texas Longhorns Brooke McCarty reacts to a refs call Sunday, during the NCAA Womens Tournament at the Erwin Center. Dustin Safranek FOR AMERICAN-STATESMAN

That’s the motto that Texas’ women’s basketball team agreed to last week on the eve of the NCAA women’s tournament. The do-or-die mentality — a staple during Karen Aston’s five years with the Longhorns — may have served as inspiration Sunday when the season appeared to be slipping away.

Instead, Brooke McCarty, Joyner Holmes and UT’s bench rallied the Longhorns to an 84-80 second-round victory over the Wolfpack before 3,475 fans at the Erwin Center.

The third-seeded Longhorns (25-8) survived and advanced to the Sweet 16 for the third straight year. They will play in Lexington, Ky., on Friday and, if they win, next Sunday for the right to play in the Final Four for the first time since 2003.

“It’s the standard,” said McCarty, speaking about the team’s recent success in the NCAA Tournament.

The Big 12’s player of the year played one of the best games of her career, scoring a team-high 23 points to lead the comeback. Holmes, who admittedly hit a “freshman wall” in the regular season, contributed 16 points and nine rebounds, including a clutch bucket in the closing seconds to seal the deal.

Aston agreed with McCarty, saying Texas now has a standard of excellence that might not have existed when she was hired in 2012.

“When you recruit players that have a personal standard to be the best, it helps you get to where you need to be,” she said.

In this case, the Longhorns will find themselves in Lexington, site of 1986 Final Four they captured.

The victory was filled with many critical factors and moments during a frenetic fourth quarter:

“The refs called a charge even though (Holmes) was still moving,” Wilson said.

North Carolina State, forced to foul, sent Lashann Higgs to the line with 7.4 seconds to play. She made one of two from the stripe, but Holmes rebounded the miss and scored a bucket that completed the scoring for both teams.

Aston correctly gave credit to a UT bench that outscored North Carolina State’s 29-5. Higgs (12 points) and freshman Alecia Sutton (10 points, 3 assists). Sutton suffered a thigh bruise and missed most of the fourth quarter, but said she will be ready for the Sweet 16 matchup against the winner of Monday’s Stanford-Kansas State game.

Texas stood tall in the paint, winning the rebounding battle for the 30th time in 33 games, 41-28. The Horns also had an 8-0 edge on blocked shots, six by Lang.

This was a perfect ending for Texas seniors Kelsey Lang and Brianna Taylor, playing for the final time before their home fans. On Feb. 24, the Longhorns lost their final regular-season home game to Iowa State, a night the seniors would like to forget.