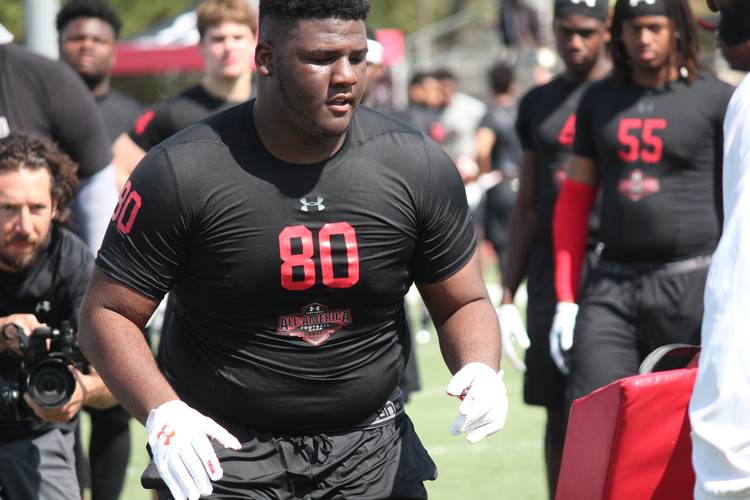 The Under Armour All-America Camp Series stopped by Westfield High School Sunday for an invite-only camp filled with top 2018 prospects. Some of the top Texas targets in the class were in attendance, including the Fabulous 55 No. 1 and No. 2 ranked players.

Houston Lamar cornerback Anthony Cook, ranked No. 1, and BJ Foster, No. 2, attended the camp, but only Cook participated in the day-long drills. Foster is still recovering from an MCL injury and doesn’t’ expect to be 100 percent until the summer. Both hold Texas offers and the Longhorns are high on their lists.

“Texas is definitely in the mix because if I was to go to Texas my class would be the turning point for Texas. The 2018 class could really make a difference. Revolution 18 is what they call it,” Cook said. “(Schools) try and tell me that if I commit then other guys will follow and I think about it, but I have to take my time and can’t rush into picking a school. I just take my time and be patient with the process.”

Cook recently visited Clemson and was blown away by the atmosphere of the defending national champions.

“I loved it at Clemson. I have a good relationship with my position coach there. It was my second time going to Clemson and there is something about Clemson,” the five-star said. “I saw the new facilities and I have to say it is the best facility I’ve ever seen.”

Foster recently celebrated a birthday and the Texas staff did something to make him feel special. The big screen at DKR Memorial Stadium wished the five-star safety a happy birthday. And while that type of gesture might not decide where a prospect signs, it doesn’t hurt.

“It was cool, real cool, to be honest. Those little things matter because it was a special day for me. The Texas staff made me feel special and took some time to do that. I liked it,” Foster said. “Texas is right there. Where I come from, all the best players have gone there and so I’m always going to have them in consideration. They let me know the 2018 class could help change things and all come together to help Texas. I think Herman can turn it around. I’ll be at Texas March 25th. I’ll be up there to watch a scrimmage.”

The top in-state defensive tackle this cycle is Keondre Coburn. The four-star from Westfield participated at his home school and felt the pressure to perform on his regular practice field. He dominated his competition Sunday, routinely throwing outmatched offensive linemen around during drills.

“With everyone coming to my field, I have to prove I belong. It is a dream for all these guys to come to my place. Westfield is sponsored by Under Armour so this is cool,” Coburn said. “My goal is to compete and get better. That’s what this time of year is for.”

“I talk to Texas every day. I play coach (Corby) Meekins in eight-ball (on the phone) losing all the time. I beat him the first time, but he’s been beating me,” Coburn said. “I’m comfortable with those guys. I have a hard decision to make eventually.”

If not for Cook, Jalen Green would be the best cornerback prospect in Texas. The four-star from Houston Heights holds a Texas offer and plans to visit Austin March 25. He was out of town during Texas’ junior day.

“I want to see if the staff has brought the culture from Houston to Texas,” he said. “Coach (Jason) Washington checks on me every day to see how I’m doing. He’s a good man and he stays true to his word. Texas is one of my top schools.”

Green plans to release his top schools in the summer.

Lashann Higgs, Alecia Sutton are showing how deep the Texas women truly are