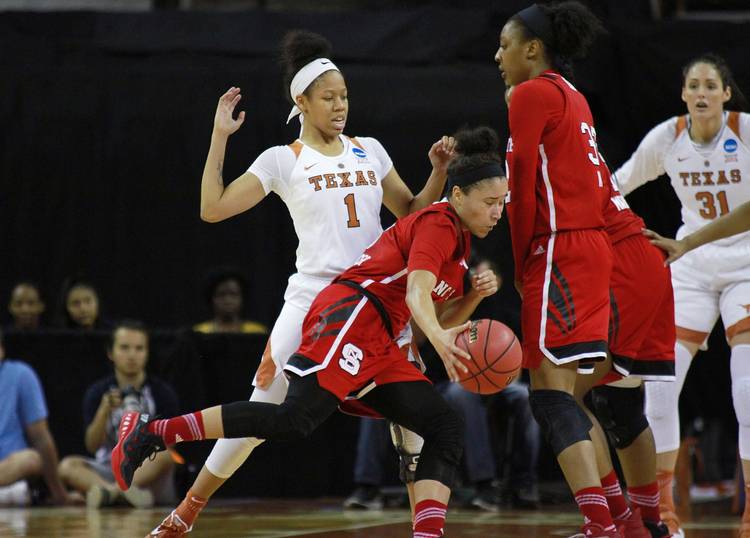 To be Lashann Higgs. To be Alecia Sutton.

To have to come off the bench and be ready whenever you’re called. Or needed. Just like Sunday afternoon, in Texas’ 84-80 second-round thriller over North Carolina State in the NCAA women’s basketball tournament.

The third-seeded Longhorns (25-8) are headed to their third straight Sweet 16 thanks in large part to Sunday’s bench production — Texas’ bench outscored the Wolfpack’s 29-5 — especially Higgs and Sutton, who’s nicknamed “Sug,” short for Sugar.

Higgs, a sophomore guard, scored 12 points. Sutton, a freshman guard, scored 10. Each played 20 minutes. And each was needed in the first quarter because of early foul trouble for starters Ariel Atkins and Brianna Taylor. Taylor picked up two fouls less than two minutes into the game; Atkins had two in less than five minutes.

“They were really the difference in the game,” said Texas coach Karen Aston. “Sug was confident today. She looked like a confident basketball player and I’ve just been waiting on that, because she is such a special player. Lashann gave us big minutes.”

Both were thrown into the frying pan. Sutton and Higgs had to guard Miah Spencer and Dominique Wilson, who combined for 58 of the Wolfpack’s 80 points. They also had to score and contribute on the offensive end. If they didn’t, Texas probably wouldn’t be flying to Lexington on Thursday.

“We prepared for this in practice,” Higgs said. “We just have to always be ready.”

Their roles changed. Their confidence didn’t. And it didn’t change in a game that was as important as it was exhilarating.

“In situations like that, you just have to be as calm as possible,” Higgs said. “Because if you have any type of nervousness in you at all, it will affect you in some way.”

After the game, Sutton admitted that she wasn’t feeling as confident as she usually is. North Carolina State played off of her in the perimeter by more than four feet, content at letting her shoot since she has shot 34 percent for the year.

She reminded herself she’s a shooter and then let it fly and was 50 percent from the field Sunday.

“I wouldn’t say I was nervous,” Sutton said. “My adrenaline was going and playing in the environment it was crazy.”

On Friday, Texas will play the winner of Monday night’s Stanford-Kansas State game in a Lexington regional semifinal; either a two-seed or a seven-seed. It won’t be easy, but it never is.

“Going forward, it’s going to be a dogfight, and you just have to be mentally tough, whether it’s the bench or the starters,” Higgs said.

Still, there’s time for play. After Sunday’s win, the Longhorns sat around their locker room, eating snacks, doing interviews and talking. And playing another game.

“I spy something blue,” she said.

Her teammates couldn’t guess what it was. That water bottle? No. That cooler? No. That sweater? No.

But here’s something you do spy in that locker room. You don’t just spy a happy team. Or a confident team. You spy a deep team, one that could be poised for a deep run.

Texas State is hot, but Texas is not as baseball programs meet Tuesday