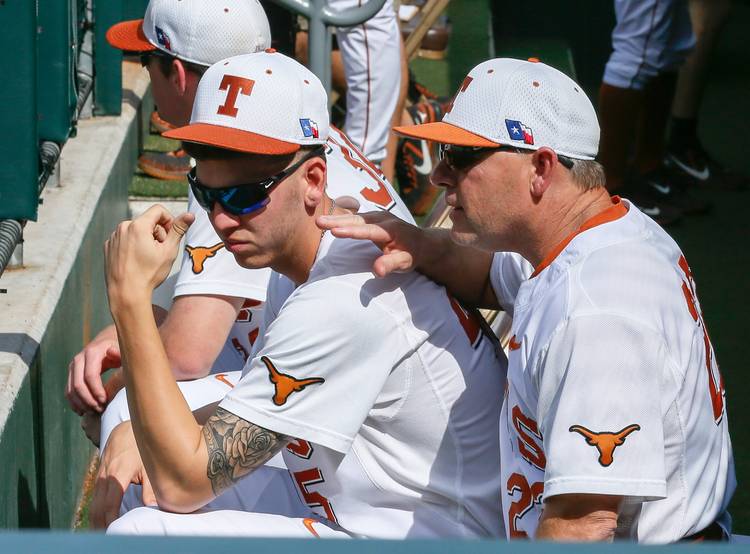 SAN MARCOS — The baseball programs at Texas and Texas State have played 54 times, with the Longhorns holding a 44-10 all-time series advantage. But the Longhorns and Bobcats are in different places after last weekend as they prepare to play each other Tuesday.

Texas (13-9), which had won six games in a row heading into last weekend’s Big 12-opening series with Texas Tech, was swept by the Red Raiders at UFCU Disch-Falk Field. The Bobcats (12-8), who have gone 9-3 in their current homestand, won a weekend series over Coastal Carolina, the defending national champions.

It was the Chanticleers’ first series loss since 2015 and it dropped them out of the Top 25.

Tuesday’s game is sold out. The Bobcats are 0-4 all-time vs. Texas in San Marcos, but those four games are the five largest crowds in stadium history. The game will end the Bobcats’ 13-game homestand.

“(Texas is) playing really well,” Bobcats coach Ty Harrington said. “David (Pierce) has got them playing really well, so I expect a great game from them. They are talented and I expect them to play incredibly hard. It’s the University of Texas; they’ll come in here and play hard.”

Texas State did beat Texas in their last matchup, a 3-2 win in Austin last May. That snapped a 23-game losing streak to the Longhorns, and it was the final of three 2016 matchups between the two programs; Texas won two of the three games.

Harrington is a former UT player from the mid-to late-1980s and was a Longhorns assistant under Cliff Gustafson from 1988-91. But he said that won’t factor into Tuesday’s game.

“You know, it’s been so long and we’ve done this so many times,” Harrington said. “It probably rings a bell because I went to school there and because they gave me my opportunity to coach and do different things, but it doesn’t go much beyond that. To be honest with you, I want our guys to play good and compete and play hard. That’s what I get more involved with than anything else.”

Harrington said the team is preparing for a big crowd.

“Anytime Texas comes to town, they are always going to create a big crowd,” Harrington said. “I certainly believe that, after this weekend and this past week, the crowd will be even bigger. The kids are getting back from spring break, all of our students have been gone for a week, but I’m sure they’ll be excited for Tuesday.”

Texas and Texas State will play two more times this season — both in Austin, on April 11 and April 18.

Lashann Higgs, Alecia Sutton are showing how deep the Texas women truly are