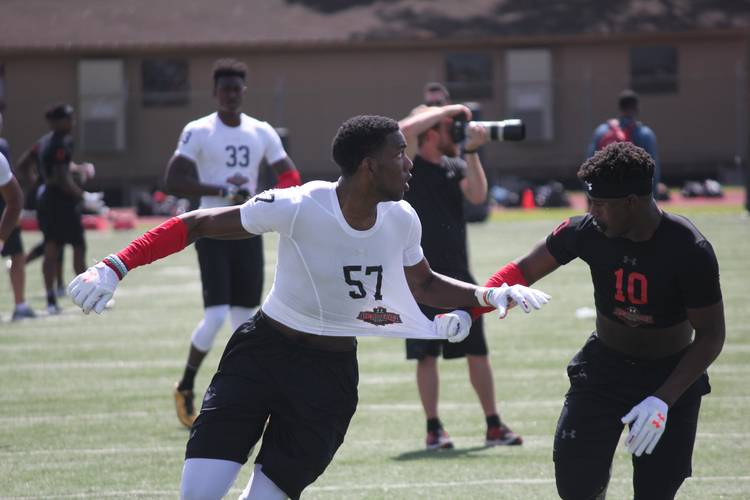 A strong collection of talent participated at the Under Armour All-America Camp Series Sunday at Westfield High School. The defensive stars took center stage, but there were a handful of offensive targets on hand. The Longhorns’ lone commitment in the 2018 class is four-star wide receiver Justin Watkins.

It’s a down year in Texas for quarterbacks and running backs. Camps without pads don’t favor offensive linemen. The top players at the camp with Texas interest were at wide receiver and tight end. The most intriguing of the bunch was Houston Lamar wide receiver Al’Vonte Woodard.

A four-star prospect and teammate to cornerback targets Anthony Cook and D’Shawn Jamison, Woodard performed better than any other receiver at a camp which included top prospects Jalen Preston and Brennan Eagles.

“I came into the camp with a chip on my shoulder because I wasn’t invited to the Future 50. My goal was to beat everybody in 1-on-1 drills,” he said. “Recruiting is going well. I’m waiting on a Clemson offer and then I’ll release my top 10. Clemson throws the ball deep and uses big receivers like myself.”

The Lamar trio is important for Longhorns head coach Tom Herman. Woodard is high on Texas and visited Austin for junior day earlier in the month.

“Texas is in my top five. I feel the change that is coming. Everyone I know who goes to Texas has told me they like the new coaching staff,” Woodard said. “Since junior day, everyone on the coaching staff is hype and they think all the players got stronger (in the offseason).”

Woodard will be in Austin this weekend to watch Texas scrimmage along with fellow targets like five-star safety B.J. Foster and four-star cornerback Jalen Green.

Tight end is a need position for the Longhorns in 2018 and the top two in-state prospects were in attendance Sunday. DeKaney’s Malcolm Epps and Fort Bend Ridge Point’s Mustapha Muhammad are top 10 players in the state and hold offers from nearly every major program in the nation. Epps was once committed to Alabama.

“My goal at the camps is to show why I’m so highly ranked,” Epps admitted. “I can run receiver routes at the tight end position and that’s a mismatch for a lot of people. I want to find a college where the tight end is used all over the field and rarely comes off the field.”

Epps looks like a basketball player. He’d need to add weight to become an efficient blocker at the point of attack against college-level defensive ends and linebacker. At 6-foot-6 and just 214 pounds, Epps said Texas has a plan to use him.

“Texas said they’d flex me out and use me that way most of the time. Some of the other colleges want me for that type of tight end and some places are more hand-in-the-ground tight ends,” Epps said. “I feel like I can do both so it doesn’t matter to me.”

The new staff is making an impression on Muhammad. The four-star tight end wasn’t high on the Longhorns when Charlie Strong was in charge due to how the air-raid offense uses a tight end. Herman’s arrival to Austin means the position will be maximized and Muhammad is now seriously considering the Longhorns because of that fact.

“Every day I hear from Texas and a few times I’ll hear from coach Herman. I spent the whole weekend at Texas for junior day with my mother and my brother,” said the four-star tight end. “I had a great time. I built relationships with coach (Corby) Meekins and coach Herman. I got to sit down and talk to those guys 1-on-1 on campus and that was special. I’ve gained more interest in Texas now that they have a new coaching staff.”

Muhammad said distance won’t be a factor when he decides and speculation exists that the 6-foot-5, 235-pound tight end is going to be the next great Texas tight end to leave the state.

“It doesn’t matter to me where I go, whether it is in state or out of state. I’m just looking for the best school for me,” he said. “On the football side, I want a school that uses the tight end in all phases of the offense. On the academic side, I’m interested in business so I’m looking for a school with a strong business school.”

Preston, a four-star out of Manvel High School, is currently the highest ranked wide receiver in the state of Texas.

“I want to show people why I’m the best and why people call me the best (wide receiver in Texas) when I’m at these camps,” he said. “It’s about competing.”

Preston is a top five player in the state and he’s getting attention from around the country, including Texas. Though, it appears the Longhorns are further down his list than other schools.

“I’m getting ready to take a lot of visits like LSU, Ole Miss and I’m going to try to get to Baylor,” he said. “I’d also like to get to Oklahoma to look at the new facility. And that’s part of it. I don’t know what kid wouldn’t like new facilities at the school.”

Preston said he hears from Texas a lot and that assistant coach Drew Mehringer stopped by Manvel recently.

“I want to know where I fit into each program. I want to feel like family,” Preston said. “It needs to be my second family.”

Texas State is hot, but Texas is not as baseball programs meet Tuesday