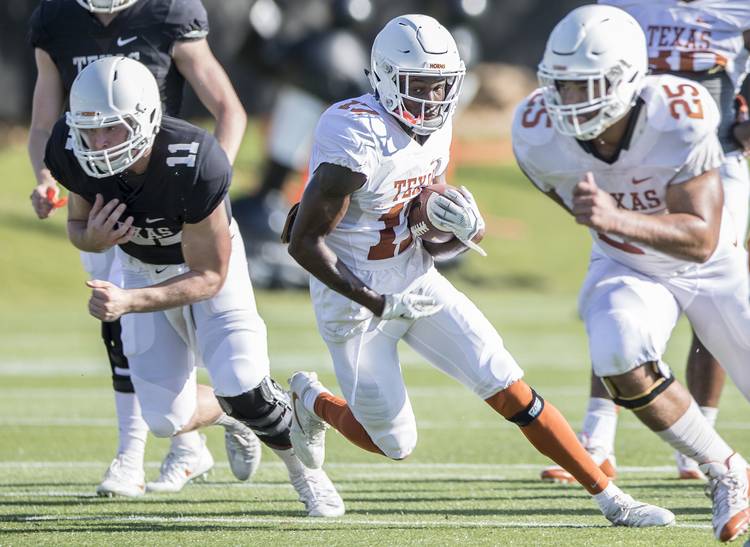 If Tom Herman truly is stripping down these Longhorns and rebuilding from scratch, he needs to find an answer to one pivotal question.

Is this a physical football team or not?

“Is that a physical team? No. Are they willing to be? Yes,” Herman said after Tuesday’s spring practice session, the third overall but first in full pads.

NCAA rules prohibit full-scale, Junction-style workouts all spring long. In fact, teams are granted only three practices total where players can tackle to the ground. But it’s safe to assume Herman wants to see who, if anybody, is willing to light someone else up over the next few weeks.

Receiver Collin Johnson said whenever there’s a new coaching staff, “you always want to impress ’em. Not just myself, I’m sure the whole team wants to do that. So we’re really excited. The first day of pads and we got after it today. It was great.”

Herman has a working theory that players are embarrassed after three straight losing seasons. Bonney agreed it’s a fair assessment.

“To see some other schools around this state that have kind of leapfrogged us, I guess you could say, is not something that we like or shouldn’t like,” he continued. “This is supposed to be the top-tier program in the state and in the nation, really. We definitely have to get back to that as soon as possible.”

As for the first day in pads itself, Herman said, “Guys tried. It was obvious that a week off for spring break and the new way of doing things was very taxing to them. But they tried to fight through it and was proud of them for doing it.”

Herman said all teams at this time of year need to get back into football shape and did not seem worried. Offseason workouts are different from actual on-field workouts, he said.

“Guys are right now dragging and huffing and puffing toward the end, but that will come,” he said.

QB leaves: Third-string quarterback Matthew Merrick, a player unlikely to ever see meaningful playing time, has decided to leave the program and focus on his academics, Herman said.

In a statement, Merrick said he had a “great talk” with offensive coordinator Tim Beck, who was supportive in whatever decision sophomore wanted to make.

Freshman Shane Buechele and incoming freshman Sam Ehlinger are the two front-runners for the starting job. But Herman has admitted that UT coaches are recruiting LSU graduate transfer Brandon Harris, who would be eligible immediately wherever lands.

On the surface, it seems odd that Herman would court an experienced quarterback and possibly delay the growth of Buechele and Ehlinger. However, it speaks to Herman’s desire to win now that he’s willing to look at all options.

“If that grad transfer is better than those two and can beat them out, we’ll worry about their growth next spring,” Herman said.

Jarrett Allen: ‘I am testing the waters with this decision’ to go into the NBA draft