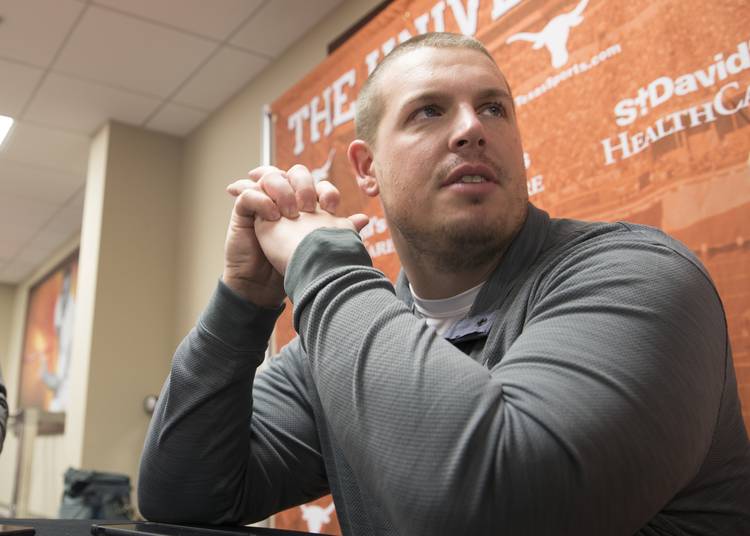 “Guys work their entire life to have the job that I have,” Warehime said. “And I know that. So I wake up every morning kind of pinching myself to make sure this is actually real.”

Warehime, the Choctaw, Okla. native and the son of a long-time high school coach, will quickly learn how difficult this specific job really is: No other position group best defines the Longhorns’ downfall as a powerhouse college football program than the offensive line.

First off, the talent disappeared. The Longhorns have not had an offensive lineman taken in the NFL Draft since 2008. Left tackle Connor Williams, who’ll be a junior this fall, is on pace to end that streak — possibly next year — but for now, that’s somewhat ridiculous.

In 2014, former coach Charlie Strong lured Joe Wickline away from Oklahoma State. But the move triggered an unnecessary and embarrassing lawsuit that hung over UT officials’ heads for two seasons. OSU officials eventually got $250,000, and Wickline bolted for West Virginia.

Last season, Matt Mattox was a package deal with offensive coordinator Sterlin Gilbert. Mattox never really got credit for holding things together while running back D’Onta Foreman chugged his way to 2,000 yards and the Doak Walker Award.

Mattox rarely spoke to reporters and was virtually unknown. He and Gilbert are now with Strong at South Florida, again a package deal.

Warehime, 34, is young, that’s for sure. He might be the first assistant coach at UT who once had his own recruiting profile on Rivals and 247Sports’ websites. It’s still available via Google search. Warehime was listed as 6-foot-3, 278 pounds back then.

He played for his father, Nick, at Choctaw and then started 34 games at Tulsa. “I grew up in a field house, in small towns, living right across the street from the field house,” Warehime said. “I was there all the time and with my dad all the time.”

That influenced Warehime to try the family business. He was a graduate assistant and video coordinator at Rice from 2006-07. UT coach Tom Herman joined the Rice staff in 2007. The two became close friends and, after Warehime spent three seasons at New Mexico, joined up at Houston in 2015.

Warehime had to juggle 11 different starting lineups for the Cougars over the course of a 14-game season in 2015. “I mean, you want to talk about chicken salad, that was the ultimate patchwork, piecemeal, whatever phrase you want to use,” Herman said.

“When I got to Houston, I was the fifth O-line coach in five years,” Warehime said. “All football players are the same regardless of talent. They’ll do whatever you ask of them as long as they know you have their best interest in mind.”

Having three line coaches in three years at Texas would seemingly scramble the players’ brains. All that’s really different is the vocabulary.

“For wideouts, a slant route is a slant route. But in the offensive line, it’s much different,” Warehime said. “Everybody calls a double team different things or a step a different thing. So there’s a learning curve when it comes to that stuff. But fortunately, I’ve got some intelligent guys in that room.”

Warehime doesn’t have the line problem that Wickline faced in 2014, though. The depth up front has been well stocked thanks to two solid recruiting classes.

Williams, a likely preseason All-America candidate, is entrenched at left tackle. Zach Shackelford started at center most of his freshman season. Jake McMillon and Elijah Rodriguez are versatile specialists who can play anywhere inside. Tristan Nickelson and Brandon Hodges are two seniors who can hold down the right tackle spot.

“Warehime, he’s intense,” Williams said. “He wants things done how he wants it. He’s a perfectionist. So everything I do I have to do perfect.”

One player Warehime needs to unlock is Patrick Vahe. Widely thought to be a natural guard, the hulking sophomore from Euless Trinity landed in the previous staff’s doghouse last fall and got benched. He’s another player who may benefit from a clean slate.

“Vahe’s in a great spot mentally right now,” Warehime said. “He’s doing unbelievable well in our offseason. I get a tap on the shoulder or a whisper in my ear from a coach on our staff every day about how much he works and how much effort he gives.”

And Warehime has a slew of younger players at his disposal, too. The Longhorns haven’t truly unleashed Patrick Hudson, Denzel Okafor or Jean Delance.

There’s plenty of tools at Warehime’s disposal. More than anything else, Warehime’s job will be to establish stability.

Herman famously claims that he has not watched one second of 2016 game film. Warehime openly admitted he’s watched every second he could find, including practice film. He wanted to know everything he could about the Longhorns before spring practice began.

“I have a really good feel for who they are, what they’re about, what their abilities are at this point and things we have to fix and help them achieve them what they came here to achieve,” Warehime said.

Editor’s note: This is the eighth of an occasional series profiling Texas’ new assistant football coaches. Past stories:

STAN DRAYTON: Can he do for Chris Warren III what he did for Ezekiel Elliott, Carlos Hyde?