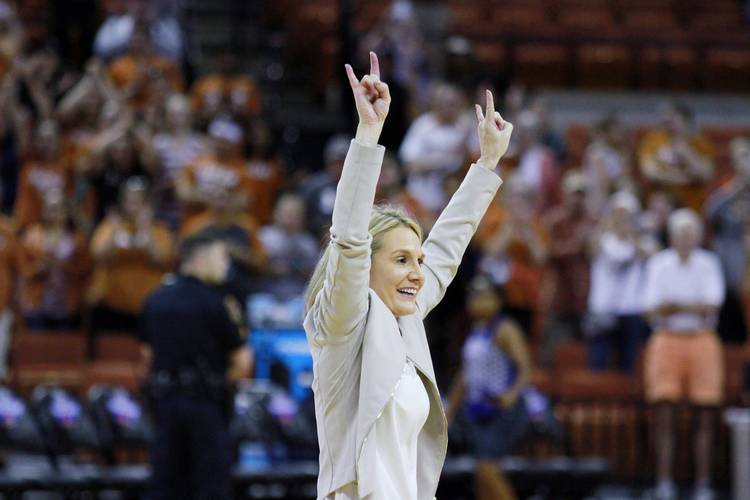 Karen Aston is fully aware that she’ll be coaching against a woman with more than 1,000 victories to her credit on Friday night.

Texas vs. Stanford promises to be exciting when the two women’s basketball powerhouses square off in the NCAA tournament’s Sweet 16 in Lexington, Ky. The Longhorns and Cardinal are familiar rivals; their annual early-season matchup is a circle-the-calendar event for both schools.

Earlier this week, Aston spoke about Stanford coach Tara VanDerveer in glowing terms, calling the long-time Cardinal coach an icon of the game, a friend and a role model.

High praise, for sure, but quite appropriate when describing someone who recently became only the third coach in NCAA history to post 1,000 career victories, joining the late Pat Summitt and Duke’s Mike Krzyzewski.

“Tara’s one of those coaches you talk about when you’re discussing how much our game has grown,” Aston said. “The exposure our game has happened because of teams like Stanford and coaches like Tara.”

Still, when third-seeded Texas (25-8) and second-seeded Stanford (30-5) tip off Friday night at Rupp Arena, friendships will be on hold for a couple of hours.

Aston is one of women’s basketball’s brightest new coaching stars. In just her fifth season at Texas, she has guided the Longhorns to the Sweet 16 three straight years. She’s a finalist for national Coach of the Year honors.

Yet Aston recalls being anxious when she went head-to-head with VanDerveer for the first time with the Longhorns in 2012.

“I was star-struck,” she said.

“It was an experience to go up against an Olympian (VanDerveer guided the U.S. to a gold medal in 1996) and someone with that many wins,” Aston added. “Not just because she wins, but how she has developed young women. She is a role model of mine, for sure.”

One of Aston’s greatest victories at Texas came against Stanford in 2014. The 10th-ranked Longhorns shocked the sixth-ranked Cardinal 87-81 in Palo Alto in Texas’ second game of the season. Nneka Enemkpali scored 18 points and Ariel Atkins had 16.

After Stanford knocked off Kansas State on Monday night to reach the Sweet 16, VanDerveer reflected on the rivalry with Texas.

“Karen’s done a great job with her team,” VanDerveer told reporters. “Our team is playing with confidence. I’m sure Texas will remember (the November game) and I’m sure it wasn’t a fun trip back to Austin. Our team is going to have focus and play really, really well to win.”

VanDerveer said she is happy to be playing a familiar foe.

“We’re excited because it works out to play a team we recognize,” she said. “We have a quick turnaround (from Monday’s victory) and finals coming up. Our players will know the names of the Texas players. We’ve seen the matchups already. It should be a great game and an exciting one to play.”

VanDerveer boasted that the Pac-12 has five teams alive in the Sweet 16 — UCLA, Oregon State, Oregon, Washington and Stanford.

“This gives us confidence because we’ve already played against great teams, great coaches,” she said. “When we go out on that court, we’re not thinking, wow, we’re not ready. we’re ready. I’m glad none of them (Pac-12 teams) are in our bracket. Let them beat someone else.”