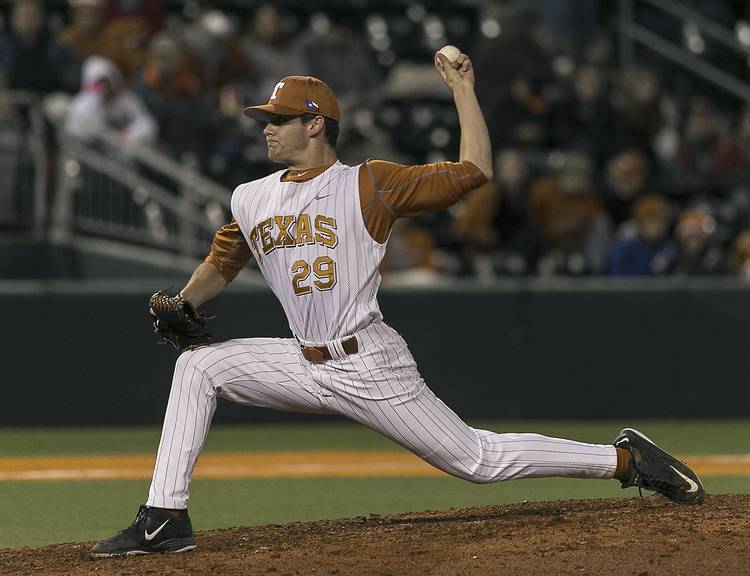 The Longhorns climbed out of a crater-sized hole in a 9-7 win over UT-Rio Grande Valley on Wednesday night. With the comeback at UFCU Disch-Falk Field, the Longhorns slid out of their four-game skid; swept by Texas Tech this past weekend, Texas also blew a late lead in Tuesday’s extra-inning loss at Texas State.

Kansas State comes to town this weekend. Texas improved to 14-10.

“Obviously we were down in some of the Tech games and we didn’t have a lot of good things going for us,” senior pitcher Jon Malmin said. “It was nice to see the guys rally and come back like that and get a big win against a team that could come in here and wants to play Texas.”

Taking center stage Malmin, the senior left-hander from Troy who before Wednesday had never exceeded more than three innings, 44 pitches or four strikeouts. He came in from the bullpen in relief of starter Connor Mayes in the first inning. Inheriting a 7-0 deficit, Malmin cooled off UT-RGV. He allowed seven hits and no runs over 6 2/3 innings. He struck out seven and threw 98 pitches.

“(My) slider was working really good, but it kind of just felt like high school again,” said Malmin, who struck out four straight batters at one point. “I was probably 120 pitches a game in high school because that’s just what we did and it was fun.”

Texas entered this week having allowed one first-inning run over the first 22 games. The day after Texas State scored two first-inning runs, however, the Vaqueros scored seven runs before the game’s third out was recorded. In the shortest start of his career, Mayes gave up a leadoff home run to Jose Garcia and issued bases-loaded walks to two of the eight batters he faced.

Malmin replaced Mayes with just one out and the Vaqueros leading, 7-0. UT-RGV produced two run-scoring hits against Malmin, but all seven runs were credited to Mayes. Malmin settled in after the first inning, and UT-RGV got only one additional runner to third base.

“He showed signs of that in the fall and early spring,” UT coach David Pierce said. “He’s a kid that hasn’t had a lot of innings. He’s got good stuff, he can help us from the left side … we just need to see more of that, and it was great to see it tonight.”

Texas, behind a pair of two-run homers from Bret Boswell and Ryan Reynolds, pulled to within one run in the second inning. The Longhorns scored two more in the fifth and Kody Clemens drove in a run in the seventh.

Eight different Longhorns recorded both a hit and a run.

Rounding the bases: Texas announced that reserve infielder Joe Baker will miss the rest of the season with a right shoulder injury. A junior, Baker had appeared in seven games. … Sophomore Beau Ridgeway allowed one hit over the final two innings Wednesday. He had a career-high four strikeouts and picked up his third save of this season. … UT-RGV dropped to 16-8.

The Dotted Line: Four top Texas prospects are expected in Austin this weekend