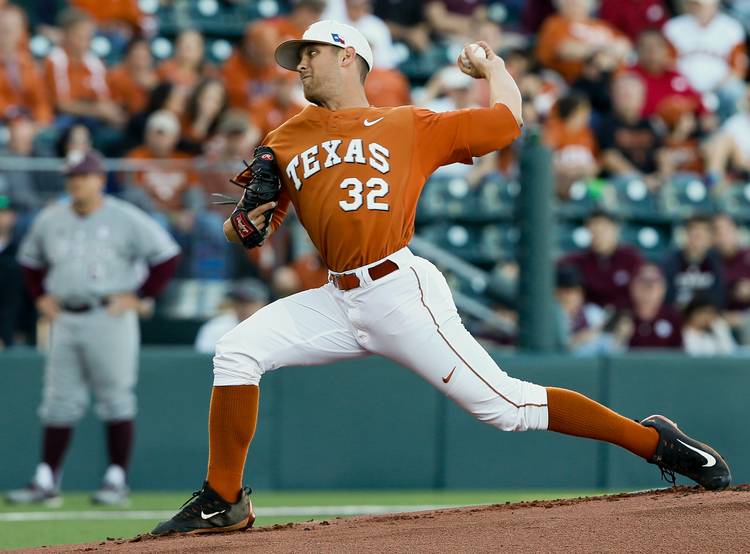 Starting pitcher Nick Kennedy (#32) in a game of the Texas A&M University versus the University of Texas at UFCU Disch-Falk Field in Austin, Texas on March 14, 2017 (Andy Nietupski for AMERICAN STATESMAN)

SAN MARCOS — For the first time, Texas lost a baseball game at Texas State’s Bobcat Ballpark, 11-10. A school-record crowd of 3,017 saw the Longhorns drop their fourth straight loss; the Bobcats improved to 13-8.

It was the fourth straight loss for Texas, which was swept by Texas Tech last weekend.

“It’s very frustrating for the simple fact that I thought we were very prepared,” Texas coach David Pierce said. “Our kids played hard. It’s an offensive park and we were very offensive tonight. I thought (UT starting pitcher) Nick Kennedy was outstanding again. We got punched a little bit in the first. He got settled in and really had his best stuff, as far as a three-pitch mix.”

Kennedy pitched five innings, allowing eight hits, four earned runs and notching five strikeouts. He allowed an earned run for the first time since Feb. 19 in a 7-1 loss to Rice.

The Longhorns had 15 hits, including four from Tate Shaw, who also had four RBIs. Travis Jones, who was 3-5 with two RBIs, also had a big night.

Texas jumped out to a quick 2-0 lead in the first inning, as Jones scored on an error and Kacy Clemens scored on a sacrifice fly from his brother, Kody. The Bobcats responded with two runs in the bottom of the first — a solo home run from Derek Scheible and an RBI single from Jaylen Hubbard that scored Jonathan Ortega.

Shaw put Texas back on top 3-2 in the fourth with an RBI single that scored Jones. But the Bobcats came right back to tie it in the fifth when Kennedy attempted to pick off Jacob Alamendarez at first base; Kacy Clemens, playing first base, appeared to lose the ball in the setting sun and it sailed past him. Alamendarez rounded the bases and was called safe at a play at the plate.

Shaw’s two-run double in the sixth scored Jones and David Hamilton, giving Texas a 5-3 lead. But again, the Bobcats answered. Texas State loaded the bases, chasing Kennedy in favor of Chase Shuggart. But Shuggart’s first pitch hit Luke Sherley, bringing in Ryan Newman from third to cut UT’s lead to 5-4. Travon Benton grounded out into a double play, but Teddy Hoffman was able to score, tying it 5-5.

Kody Clemens’ solo homer put Texas back on top 6-5 in the seventh, and the Longhorns added three more runs in the eighth to go up 9-5 on a Jones homer.

But again, the Bobcats came back. Texas State scored two runs on an error and an RBI single in the bottom of the eight, cutting the Texas lead to 9-7. The Longhorns made it 10-7 in the top of the ninth when Shaw knocked in Austin Todd, but Sherley’s heroics in the bottom of the night — he knocked in two runs to make it 10-9 and then scored the tying run on a sacrifice fly — sent the game into extra innings.

Sherley knocked in his fourth run of the night in the bottom of the 10th, scoring Newman for the game winner.

The Longhorns must turn around quickly after the loss; they host UT-Rio Grande Valley (16-7) Wednesday night at UFCU Disch-Falk Field.

Editor’s note: The original version of this story was edited to correct the Bobcats current record.

Jarrett Allen: ‘I am testing the waters with this decision’ to go into the NBA draft