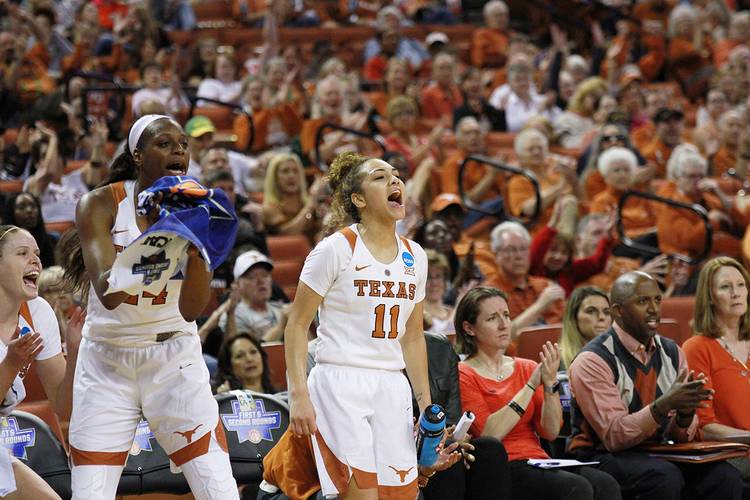 LEXINGTON, Ky. — Tara VanDerveer had no idea how the three-point shot would impact college basketball until she took her team to China in the summer of 1986.

The trip came one year before the NCAA had incorporated the long-range shot. Her Stanford players, who had never even seen a three-point line, received a rude introduction.

“In one of our games, one player (from China) made 10 three-pointers,” the Cardinal coach said Thursday at Rupp Arena. “Now, I’m going to say 20 or 25 years ago, that seemed outrageous, but now it’s not outrageous. … I remember thinking we’re going to take advantage of that three-point line.”

The advent of the three-pointer was a revolutionary change that the NCAA adopted before the 1987-88 season. With a distance of 20 feet, 9 inches from the rim, Stanford and Texas have players who are among the best shooters in the country from that range.

Stanford’s Karlie Samuelson ranks second in the nation behind the three-point stripe, hitting 48.3 percent of her shots (87 for 180). Texas counters with Brooke McCarty, the Big 12’s player of the year who ranks 13th in the nation, hitting 43.3 percent (77 for 178).

VanDerveer said her 1990 team that won the national championship “embraced” the three-pointer, and it paid off.

“We didn’t have the biggest teams, the most physical teams, and we had to be more of a finesse team, a shooting team,” she said. “So someone like (former Stanford players) Jennifer Azzi, Katy Steding and Sonja Henning really took advantage of it.”

Hall of Fame coach Jody Conradt remembers being reluctant to use the three-pointer when the shot began. Her Texas teams were so accustomed to winning, it didn’t have much bearing on their success in the old Southwest Conference. And most of her incoming players were not used to perimeter shooting in high school.

Conradt remembers sharing statistics with her players to keep them informed of their progress. During one game the Longhorns were 0 for 1 behind the three-point line.

“I remember Beverly Williams coming up to me and saying, coach, when’s the last time we’ve ever been last at anything?” Conradt recalled. “Finally, Penny Hall banks in a long-three pointer. I went up to Beverly said, ‘Now we’re 1 for 2.’”

One player who might have benefited from the three-pointer was Linda Waggoner, who played for the Longhorns from 1976 to 1980 and ranks second in team history with 2,256 points.

“If the three-point line had been there when she played, she’d still own all the records,” Conradt said.

On Friday, one of UT’s missions will be to contain Samuelson, Longhorns coach Karen Aston said.

What makes her so effective behind the arc?

“It’s the whole team, not just her,” Aston said. “Stanford has a really good concept of their offensive flow and they screen very well. … One thing about Samuelson — not just recently, but her career — has been the ability to play off the bounce. When she first started, it was catch-and-shoot. Now she’s added more dimensions to her game and it’s made her more difficult to guard.”

Before the team’s late-afternoon practice on Thursday, McCarty said she was eager to get accustomed to depth perception inside the cavernous 23,500-seat arena.

“This place is huge,” the 5-4 junior guard and UT’s leading scorer said. “I need to go out there and get a feel for the gym and the stands and everything else that’s going to be part of it.”

Aston, for one, isn’t worried about the size of Rupp.

“We’ve played in some environments that have been different,” she said. “That’s the one thing about this team, there’s not a whole lot we haven’t seen.”